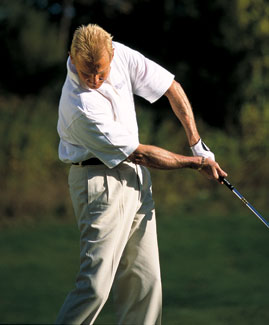 Most teachers will instruct you to fold your left arm into your left side during your followthrough so your hands and arms can release the clubhead down the target line. That's certainly good advice, but at times, especially in pressure-packed situations where you absolutely have to hit the ball onto the green with an iron or drive it into the center of the fairway off the tee, not folding your left arm into your side can pay huge dividends.

Allowing your left arm to remain bent into the followthrough is known as chicken-winging. Typically, it's a move associated with a lower-level swing and can produce a variety of poor shots. However, when used in the hands of an expert shotmaker, the chicken-wing swing is a low-risk, high-reward option.

The chicken swing is a shot made famous by Lee Trevino, and is often used by many of today's golf superstars, including Tiger Woods. Nick Faldo employed the chicken swing to win the 1992 British Open at Muirfield, where he hit the final 18 greens in regulation and bested John Cook by a single stroke. Faldo, aware of the tremendous pressure he'd face during Sunday's final round, practiced the chicken swing long in advance of the tournament to groove what may not have been the prettiest motion in the world, but one that was laser-accurate on demand. If you want to take it low like the pros do when the heat is on, put some range work into the chicken swing–it's a delicacy under pressure.

The Technique
To hit the chicken swing, use one more club than normal and aim slightly left of your target. The key, on the backswing, is to stop at three-quarters. The downswing key is to shuttle your hips toward the target to begin your move back to the ball and then rotate them out of the way to give your arms room to return to the front of your body at impact. Since you don't want the toe of your club to pass over the heel, keep your right wrist bent just as it was at address throughout the entire swing. If you can retain this wrist angle, you should finish with your hands in front of your chest and your clubface looking at the sky.

The critical ingredient of the chicken swing is to stop the rotation of your forearms postimpact by allowing your left elbow to float up and away from your side as you clear your hips through the hitting zone. This will keep your clubface slightly open to the target well past impact. The shot will fly lower than normal because you've taken an extra club, but a soft left-to-right sidespin will help the ball stop as if hit on its normal arc.

A word of caution: If you allow both elbows to chicken wing, you're likely to contact the ball on the neck of your club. Therefore, as your left elbow drifts away from your left side through the hitting area, keep your right elbow as close to your right side as possible.

Final Keys
To pull off this shot, you must keep rotating your body to ensure that your clubhead lags behind the hands through impact. If you stop your body rotation, the clubhead will shoot past the shaft and cause the face to move off-line. Remember, even though the chicken swing is a dead-arm motion, it doesn't mean the arms should move slowly or, worse, stop. It's simply a case of them not rotating or turning over as they do during a regular swing.

Wrong Wing, Wrong Swing
The incorrectly executed chicken wing finds the shoulders spinning to start the downswing, but the hips and lower body lagging behind. This forces the club out toward the target line, resulting in a weak sideswipe at impact. For most high-handicappers, the chicken wing is the bane of their games, but if used correctly and on-call, it can stop the ball from going left–the mistake most good players fear.

PGA professional Dr. T.J. Tomasi is regarded as one of the top 100 teachers in America. He instructs at Pistol Creek Golf Club located outside Hartford, Conn.