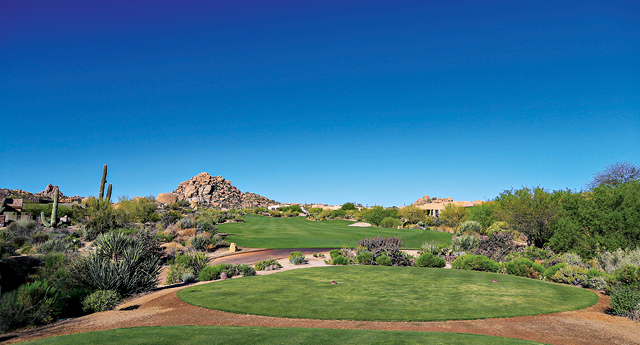 In today’s golf climate, it seems everyone is fixated on distance. Whether it’s off a tee with a driver or from the fairway with a wood or an iron, we’ve become obsessed with hitting the ball farther and not so much on hitting more fairways and greens. That’s not always a good thing, especially if you play target golf on layouts like the one you see here at my home club, Troon North Golf Club in Scottsdale, Arizona. Here, distance helps, but as you can see, there isn’t much room for shots that veer too far offline. The course is designed more as a series of targets to land the ball on, not so much a course where the fairway unrolls all to the green.

Let’s take a look at a handful of shots that not only will help you better navigate target-style golf courses, but will make you a more accurate player no matter where you choose to play.

Playing target-style golf doesn’t always mean you have to scale back on distance. In fact, sometimes hitting the ball higher not only makes you more accurate, it can help you hit the ball farther, as well. To launch the ball higher so it lands more softly and with less roll, set up with the ball a little more forward in your stance. This will help you hit up on the ball for a higher launch. Also, widen your stance. This will keep you from hitting the ball too much over your left side and, again, get the ball launched higher in the air.

Don’t get me wrong, there are some instances where lessening your shoulder tilt can help you. But come time to launch some big bombs high into the air, it’s best to hit the ball with some added shoulder tilt. By that, I mean lowering the right shoulder. Now, before you go do this on your own, notice how I’m adding tilt not by artificially raising my left shoulder, but by tilting more from the base of my spine and adding tilt without adjusting my shoulders. The last thing you want to do is fake some extra shoulder tilt by raising the left shoulder and keeping your core relatively vertical. To do it right, add tilt to your shoulders by bending to the right with the lower spine, not the shoulders or neck.

Another great way to hit the ball higher is to hit the ball more toward the top of the clubface. The top region, once dubbed “the hot spot,” is where the clubface deflects, loft is added and spin is reduced, all at the same time. You may lose some ball speed here, but the net effect of less spin and a higher launch sometimes can lead to more distance than you would have had hitting it dead-center in the driver’s sweet spot.

So consider adding some height to your tee, and it’s okay to hit the ball more toward the top of the face. If you hit lower on the clubface, generally this means you’ll create more backspin, which despite what you may think, actually can cause your drives to fly more errantly. The simple reason is, all shots have backspin, and when you hit a slice or hook, that slice-spin and hook-spin is actually backspin on a tilt. So unless you hit the ball dead-straight all the time, adding backspin actually can make your slices and hooks bigger. When in doubt, opt for less spin for more accuracy off the tee with a driver and make contact higher on the clubface.

Are you the type of player who hits straight drives on wide-open courses, but struggles with accuracy on tighter, narrow courses? Odds are, you make faster, more confident swings when there’s less danger to contend with, and you punish more fairways when the course is free and wide. If this sounds like you, play every hole as though it’s wide open! Don’t tense up and worry because there’s trouble left or right. A constricted swing is usually an out-of-sync swing that rarely hits the ball straight. Instead, swing aggressively and imagine a huge fairway. You’ll find that a confident swing is more accurate than a swing where you’re trying to steer the golf ball.