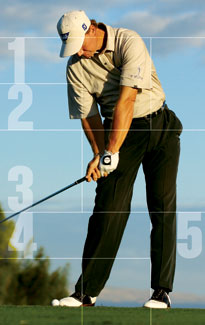 To say that Ernie Els is one of the greatest golfers of our generation is about as gutsy as laying up from 150 yards. Already a three-time major winner (’94 and ’97 U.S. Opens, ’02 British Open), Els has notched 42 professional victories worldwide (12 on the PGA Tour) in just over a decade. More impressive, Els has 11 second-place finishes to his credit, including four runner-up calls in the majors. Often dubbed The Big Easy, Els is certainly big (6’3, 220 pounds) and his swing is ridiculously effortless. It’s a study of contrasts, as he generates power not by his obvious size, but by employing the proper sequence of downswing moves. Here’s how he does it.

1. Perfect Path
As Els approaches the golf ball, his left shoulder rocks up while his right shoulder remains low. This slight raising of the left shoulder allows him to keep his head behind the ball through impact and his arms to work down the correct path. If the shoulders are level through the hitting area, it becomes nearly impossible to swing along the correct inside-out path.

2. Swing The Club
This image is a single moment in time, captured during Els’ record-setting weekend at the Mercedes Championships. But it’s part of a chain reaction–a result of all that’s occurred before it. You simply can’t work at the approach position. The key, like Els demonstrates swing after swing, is to control the clubhead by swinging it, not guiding it. Trust your mechanics and let impact happen.

3. Tempo
Els’ effortless power results from his ability to successfully combine the rotary action of the hips with a very good arm swing. Most recreational players tend to err on too much hip action, forgetting that, in the end, the arms and hands are what propel the golf club into the back of the ball and beyond. Synchronizing the lower and upper body generates power along with control of the golf club.

4. In Balance
One thing all good golf swings have in common is balance. This can’t be stressed enough. Good balance starts from the ground up, and Els certainly accomplishes this as he adopts a wide, solid base from which to swing. Throughout the backswing and downswing, Els strives to maintain this base. Even as he approaches impact, his right foot is still down with just a slight roll. This shows his knees and hips aren’t overactive; they’re serving correctly as stabilizers.

5. Pivotal Moment
Like all good ballstrikers, Els braces his left knee. This posting up allows his hips to rotate open through the hitting zone (they’ll ultimately face the target at the finish). Open hips give the arms the room they need to extend out through the shot. If the hips remain closed or don’t rotate at all, expect your shots to travel much shorter than they would otherwise.