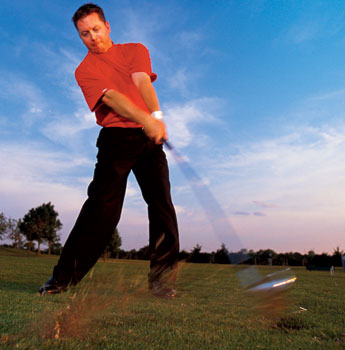 Moe Norman was considered by many to be the best ballstriker of all time. Even Ben Hogan was once quoted as saying that, “Moe was the only guy that I would walk across the street to watch hit balls.” But anyone who’s familiar with Moe Norman knows that his golf swing was a bit unconventional. Compared to today’s popular techniques, Norman’s golf swing was called single-axis, not the two planes normally associated with the modern dynamic. Taking away and returning the club on a single plane fueled Norman’s consistency and correctness at impact by “de-complexing” the swing. Is a single-axis motion the best way to swing a golf club? The debate has raged for decades. At the very least, it effectively simplifies and helps improve the most important part of the swing—impact. A comparison of the single-axis technique and the modern swing shows how.

The key difference between the conventional golf swing and the single-axis golf swing is the relationship between address and impact. At address, the conventional player sets up to the ball with his arms and hands directly below his shoulders, forming two separate lines that create an angle between the arms and clubshaft. Although this seems to make some sense initially, it makes no sense when you consider that the ball doesn’t sit below the shoulders. If you view the same conventional golfer at impact, you see that the club and arms have contacted the ball on a steeper or higher plane.

In contrast, the single-axis address position aligns the club on the same plane as the impact plane. In other words, the single-axis golfer starts the club on the impact plane. By beginning on the same plane as impact, the entire golf swing is simplified, and the likelihood of solid contact with the ball is multiplied. This was the secret to Moe Norman’s amazing ballstriking ability. 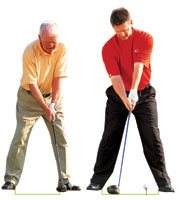 Unlike the conventional approach, the single-axis method mimics the impact position at address, negating the need for multiple planes. Arms extend from shoulder, not hang underneath.

Conventional Golfer — This view of the conventional golfer shows a narrow stance with the lead arm on a different line than the clubshaft. The trail hand is on top of the golf club and the hands start behind the clubhead. This position is significantly different from the one that will be attained at impact.

Single-Axis Golfer — The single-axis golfer begins with the hands positioned in front of the clubhead with every club. This establishes a relationship with the lead arm and clubshaft, which Moe Norman called the “rod.” This rod position is the same straight line that occurs at impact when the lead arm and clubshaft align. Once again, the single-axis position is establishing an easier starting position relative to returning to impact.

Since the traditional golfer begins with two angles at address, he or she must hinge the wrists in order to get the club onto the impact plane. Why not start the club there? 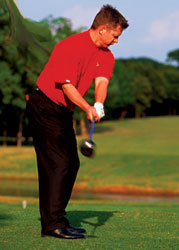 Conventional Golfer — Because the traditional golfer started with two angles at address, you can see that he has had to hinge his wrists in order to get the club onto the impact plane. Also notice the steeper shoulder plane created by the address position and the fact that the spine has somewhat tilted forward, away from the original spine tilt created at address. Proponents of the single-axis technique point to these many, varied movements as being unnecessary, adding only complication to the swing.

Single-Axis Golfer — At the midpoint in the backswing, the single-axis golfer has moved the club directly along the impact plane. This is accomplished by simply maintaining the relationship of the lead arm with the lead shoulder established at address, which allows the club to ride the single plane all the way to the top. This begins to illustrate how much easier it is to swing on plane with a single-axis motion. Notice the width of the arms and how the hands are hinging in a leveraged position. The hips have slightly rotated, keeping the spine tilt the same as it was at address, which is the same spine tilt you’ll see at impact. Also, by maintaining the spine tilt, the shoulders have moved on plane, following the arm movement according to the single plane of the arms and hands. 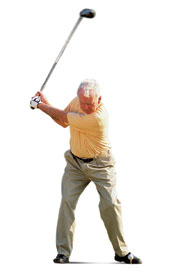 No need to drop the arms into the slot with the single-axis technique—they’re already there. 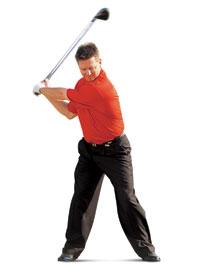 Conventional Golfer — The traditional address position forces a steeper, more vertical arm movement to the top of the backswing. You can clearly see the amount of shoulder rotation necessary to move the golf club to the top (right). You also can see how the spine has moved toward the target, almost in a reversed C position, which puts unnecessary stress on the spine. In addition, the right elbow also has been lifted and will need to drop in order to get the club back on plane in the downswing.

Single-Axis Golfer  — A key benefit of the single-axis address position is that it serves to simplify arm and shoulder movement to the top of the backswing while allowing the spine position established at address to be maintained throughout. Notice how the lead arm sits directly on the shoulder line, and that even this deep into the swing, spine tilt has not been altered (above, left). What has dramatically changed is the hinge of the wrists, which now are fully cocked and ready to deliver as much energy as possible into the back of the golf ball (the hands are the fastest part of your body, by the way). Unlike in the conventional swing, there’s no need to drop the right elbow because the straight line established at address has allowed the arms and shoulders to move on an ideal plane for square impact. Again, the single-axis technique works to simplify the swing.

Conventional Golfer — You can see the lower body rotating with the lead leg straightening and the back foot lifting, which is necessary to create room for the lifting of the clubshaft into impact. The trail elbow is slightly behind the trail hip, which often can lead to a trapping of the arm behind the body. This body rotation and trapping of the arms can be a major cause of inconsistency.

Single-Axis Golfer — Notice how the head remains behind the ball, the trail foot is on the ground, and spine tilt is maintained. The lead leg has remained flexed and stable, and since the single-axis swing started on the same plane as impact, there’s no need to move the body to compensate and make room for a steeper shaft.

While the impact positions of both the conventional and single-axis golfer will look very similar, the difference lies in how they arrived there—through multiple planes or on a single path. 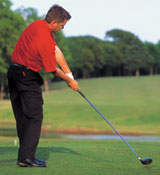 Conventional Golfer — You can see at impact that the shaft angle is steeper than it was at address. Because of this steeper impact plane, the conventional player has lifted his trail foot, lifted his spine angle and rotated his torso to be able to reach impact. However, check out the  straight line formed between the lead arm and clubshaft, with the trail arm bent. It’s the same arrangement as seen with a single-axis golfer, but it required two planes to get there.

Single-Axis Golfer — Because the shaft plane is the same at setup as it is at the point of contact, it’s often difficult to tell the difference between these two positions with a single-axis golfer. There’s no need for an upward or backward motion of the spine or an over-rotation of the hips. The single-axis golfer is able to maintain his spine angle and keep his trail foot on the ground. Throughout the swing, movement is minimal compared to traditional methods, which is the key to the swing’s consistency.

The single-axis swing’s simplicity continues into the release, where the arms power past a flexed, yet posted, lead leg and move straight toward the target, almost like a pendulum.

Conventional Golfer  — The conventional swing requires a full release of the entire body, with excessive hip rotation and the need to lift the trail foot off the ground. Also, the forearms must cross in order to square the clubface.

Single-Axis Golfer — The single-axis release position shows how the swing was based on a completely established lower body, with the lead knee flexed but stable and minimal rotation of the trail hip. Because there was no need to lift the torso into impact, the trail foot is still on the ground in the released position. The arms have essentially become an extension of the club. Easy.

The single-axis swing isn’t as odd as you once thought. If you struggle with consistency, it may be worth your while to investigate what is, at the very least, an easier way to achieve a solid impact position. For more information, visit www.swinglikemoe.com.

Many of the fundamentals of the single-axis swing can be seen in familiar Tour players from recent years. Craig Parry and Tom Lehman have similar address positions. Mike Weir has a similar mid-backswing position, with his trail foot on the ground at impact and a perfect extension of the club after impact. Mark O’Meara is almost a perfect image of Moe Norman in his release position. Also, many Tour players are beginning to shorten their backswings, stabilize their body positions and minimize rotation during the swing, all characteristics of the single-axis swing.

This story was updated for clarity and readability in September 2017