Regardless of how good your golf swing is or how crisply you strike the ball, you won’t post good scores if you don’t know how to think your way around a golf course—to score from anywhere. 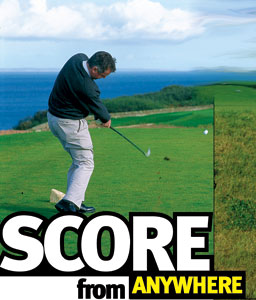 Obviously, solid technique helps, as does driving the ball long and straight. But throughout the course of a round, there are a variety of situations in which fundamentally solid golf skills simply won’t get the job done. Instead, you must be able to rely on good decision-making to put yourself in position to shoot the lowest score possible without risking double and triple bogeys. Many of the following tips might not seem earth-shattering at first glance, but in time they’ll save you a fair number of strokes. And I know from my personal playing experience that sometimes just a couple of shots here or there can make all the difference.

While the views from Scotland’s seaside links can be magnificent, shooting good scores can be difficult. Due to the typically windy conditions, shot and club selection are at a premium. Depending on which direction the wind is blowing and the shape of the target area, even a little thing like which part of the tee box you hit from can save a couple of strokes. In most instances, play with the wind rather than against it. If it’s blowing left to right, for example, favor the left side of the teeing area.

One of the most common mistakes made by golfers when attempting to drive the ball low is overswinging. Typically, a faster, more powerful swing, especially with a low-lofted club like the driver, will produce higher spin rates and shots that balloon up into the wind. Obviously, on a downwind shot, this technique can be desirable. But when you need to hit a more piercing, low-trajectory drive, the key is not to overswing. I recommend positioning the ball slightly back in your stance (more toward the middle of your body, instead of off the left foot) and making a smooth, body-driven swing. By swinging smoothly, with your arms as loose as possible, you’ll be able to take some of the spin off the ball, which helps to keep it low and under the wind. Notice how my hands are clearly ahead of the ball and clubhead as I approach impact. This shows that I’ve taken an abbreviated backswing, with the intention of simply returning the clubhead to the ball as smoothly and effortlessly as possible.

A smooth, easy tempo is critical to producing low, boring drives, but reducing the length of the backswing is also key. Not only does a shorter backswing help take some of the speed off the clubhead, but it promotes more solid impact, which is an absolute must when playing shots into the wind. 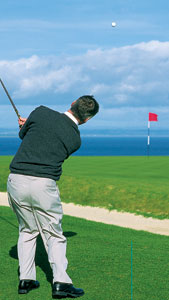 This is a situation that every golfer has faced at least once in their playing career: a shot over a bunker from a tight lie. The key here is not to try to flip the clubhead at the ball through impact, which leads to skulled, thin shots that either shoot over the green or straight into the bunker. Instead, keep your hands ahead of the clubhead at impact and remember to maintain a normal tempo.

Pitching over a bunker from a tight lie can be further complicated by a tailwind. The most important thing is to pick a target that will allow you to clear the bunker, while still providing enough room to keep the ball on the green. Once you’ve picked your target, forget about the flag and just hit the shot.

Hitting an iron shot into the wind from a tightly mown fairway can be a tough task. However, with the proper technique, it’s relatively simple. Start by placing the ball well back in your stance to promote solid contact. Depending on the wind, you’ll want to select at least one, if not two or three extra clubs than usual (to further help keep the ball low). Then concentrate on a slow, smooth takeaway and try to return the club to the address position. After some practice, you’ll be surprised how easily and consistently this shot bores through the wind.

Fairmont St. Andrews Resort (formerly St. Andrews Bay Golf Resort & Spa) and its two championship golf courses (The Kittocks, designed by Bruce Devlin and Gene Sarazen, and the Torrance, designed by Sam Torrance and Gene Sarazen) offer panoramic views of the River Tay estuary, the North Sea, the Fife countryside and the ancient skyline of St. Andrews. The hotel itself provides guests with a full range of amenities, including satellite TV, DVD movies and high-speed Internet connection (both U.S.- and U.K.-compatible), while the European-style spa offers a full range of body and beauty treatments, as well as a full-size heated pool. State-of-the-art conference facilities are also available. For more information, visit www.fairmont.com

Every golfer knows the effect wind can have on drives and approach shots, but putts can be strongly influenced by wind as well. Indeed, one of the toughest shots you can face in windy conditions is a lengthy lag putt with a significant side wind. In these situations, I like to select a target to the right or left of the hole (depending on the wind) and concentrate solely on that spot. When I strike the putt, I pay no attention to the actual hole, but simply roll the ball to my target hole, allowing the wind to take it toward the cup.

Let It Fly: Shoot The Breeze

On approach shots over hazards, the wind can actually be your friend. When possible, opt to hit shots that take advantage of the wind instead of those that try to fight its effects.

Here, I’m hitting into a left-to-right wind, with a bunker on the right and some long grass in front of the green. Instead of trying to draw the ball in low, against the wind, I almost always choose to ride the wind. In this case, the smart thing to do is aim well left of the target and hit a straight, solid shot with a nice, high follow-through. This will shoot the ball up into the wind and allow it to blow the shot over the hazards and safely onto the green.

High Irons: Play It Up

When golf instructors talk about playing shots in the wind, they almost always focus on playing the ball low. There are some situations, however, like when you have a tailwind, when it’s best to play the ball high and exploit the wind. In these cases, I recommend positioning the ball more forward in your stance, close to your left instep. Instead of taking an abbreviated backswing, allow yourself to make a full swing. When you reach impact, stay back and let your arms extend fully through the ball. The shot should rise quickly off the clubface and attain enough altitude to take full advantage of the wind. 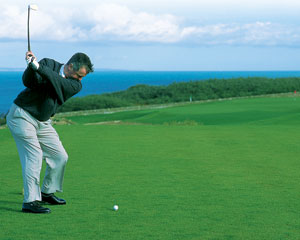 To execute the high pitch, select a lofted wedge and position the ball slightly forward in your stance. A high, balanced finish will allow you to carry the ball onto the green. To play the low shot, which I recommend most of the time, position the ball back in your stance and use a less-lofted club. Finish with your hands relatively low, and let the ball feed to the hole.

Downhill: Use Your Head

On downhill approaches like this, it’s always tempting to fly the ball to the hole. In this case, however, I suggest playing a high-percentage, low shot toward the middle of the green. Select one more club, and make an abbreviated backswing with minimal wrist cock. Don’t be afraid to put the ball on a tee—you’ll still be able to hit it low.

For a high bunker shot, open the clubface and aim it at your landing area, while you point your feet well left of the target. Take a longer backswing, and allow the club to pull your arms into a nice, high finish. The ball will come out high and should land softly.

Just as is the case with greenside pitches, bunker shots can be played either high or low. To hit a low, running bunker shot, keep the clubface square at impact and finish with a low followthrough. When you play this shot, remember to allow for a substantial amount of roll.