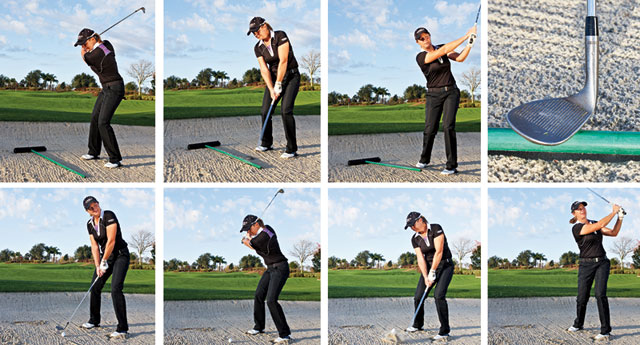 If there's one shot in golf that golfers unnecessarily struggle with, it has to be the simple bunker shot. Hitting a bunker shot is the only shot in golf where it's okay to miss the ball, meaning it actually requires less precision than a standard shot. So, as you would guess, it's all in the technique, which makes this drill I call “Rake It Up” so valuable.

To improve your sand play, first understand how the club is designed to interact with the sand. Most sand wedges have an element called "bounce," which is the angle of the leading edge and trailing edge of the sole. In simple terms, "bounce" actually does as the name implies. It helps the wedge bounce off the sand and prevents it from getting stuck. To develop how to take advantage of your wedge's bounce and how to feel the proper sensation for the bunker shot, consider making a few practice swings on top of the rake in the sand that's pointing directly at your target. (Obviously, this is a practice drill; you can't do this in competition.) Take a few light swings and get the sole of your wedge to start bouncing off the rake. As you do this, you may actually see the rake lift off the sand. This is the feeling you want to have as the club passes through the sand and helps lift the ball into the air. (By the way, don't break the rake!) As you practice this drill, keep swinging along the rake at the target.

Secondly, think of the bunker swing as a V shape, not a U shape. This means you want to steepen both your backswing and your downswing by adding some extra hinge in the wrists. As you add some extra hinge, keep your lower body quiet and favor your left side. The key is to limit your lower body movement, which will both help speed up the upper body and add some steepness to your swing arc.

BE OPEN ABOUT IT

Third, open the face of the wedge before you grip it (don't twist your hands) and experiment with how much works best for you. Some players like square clubfaces; other prefer hitting shots with the face wide open. The key to remember is that even with an open face, you want to swing the club directly at the target. Don't worry so much about where the clubface is aiming. Even if it's open to the right, I want you to swing the club directly "along the rake," that is, I like to imagine there's a rake below the ball and I need to swing the club directly along that rake. Allow the hands
to release, too. Don't feel as though you need to hold that clubface open through the entire shot.

Lastly, as you make a bunker swing, remember the sensation you developed while practicing with the rake. You want to clip the sand before the ball and actually use the bounce of the wedge to bounce the wedge off the sand. Now, practicing with the rake helps you really feel the sensation of bouncing the sole off the handle, but in
the sand there will be a lot more friction to deal with, so swing with extra speed and momentum, and hit no deeper than an inch or so into the sand. The finish position that indicates a good bunker shot always has a full rotation of the upper body, with the hands low in front of the chest. Hone in on these quick pointers, and you'll find that bunker shots are a lot easier than you first thought. Bounce your wedge off the rake!

Charlotta Sorenstam is a former LPGA Tour player and now a teacher based in Orlando, Florida.

2 thoughts on “Rake It Up For Great Bunker Play”