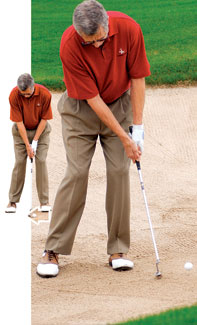 Using a putter (the good ol' Texas wedge) to escape a greenside bunker should only be attempted if the sand in the bunker is firm, the lie is decent (not buried) and the bunker itself doesn't feature a lip, or if it does, a very small lip with a rounded edge. If you try this shot without each of these conditions being met, be ready to hit two shots from the same place.

From your clean lie, address the ball as you normally would with a putter on the green, with your weight centered over both feet and with your standard putting grip. Play the ball back in your stance, which will help prevent touching the sand through impact. In this situation, unlike other bunker shots, the key is to catch all ball and no sand, so plan on striking the upper hemisphere of the golf ball with the putterface. Expect the ball to roll much like it would on the green and then pop over the lip. Because you'll be hitting all ball and no sand, and the ball may pop up when it hits the lip, don't be afraid to hit this shot harder than you would a normal putt from this distance. The off-center strike and spin from the hop will reduce the speed of the ball, so give it a good hit. With a little practice, you'll find that this shot reigns supreme and nearly takes out all the guesswork from low-lipped bunker shots.