EDITOR’S NOTE: The original form of the game, links golf, takes center stage every July when the Open Championship rolls around. From Royal Portrush in 2019 to Royal St. George in 2020 and the Old Course at St. Andrews for the tournament's 150th edition in 2021, the golf world will once again become engrossed with the creativity, variety and unpredictability inherent in the brand of golf played on those courses and all links layouts.

In this piece, originally run in 2006, a teacher from Dundonald Links — which hosted the 2017 Scottish Open — looks at the unique tests of technique and strategy that true links golf demands, in the form of three much-used shots. 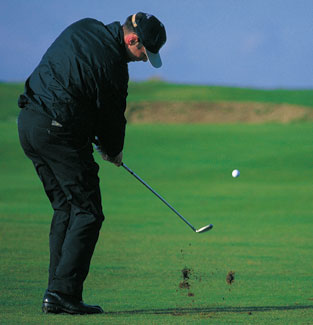 Any golfer worth his salt dreams of trying his hand on a true links golf course. Turnberry, Kingsbarns, Royal Dornoch, even Carnoustie — they all present challenges that inland courses, protected from the elements, simply can't muster. The soft fairways that prevent errant drives from running into the rough don't exist. Spongy, well-watered greens that receive approaches of all kinds just aren't there. It's a whole different style of play that favors putting over pitching and low, authoritative punch shots over high, spinning floaters. Above all, links golf demands imagination.

To understand how native players of links-style golf feel, one only has to listen to PGA professional David Thomson, who teaches at the Carnegie Club at Skibo Castle in Dornoch, Scotland. American-style golf doesn't take anything up here, he says, pointing to his head. All you have to do is hit it on the fairway and hit it on the green. There's not much to it.

Now, many of us would scoff at Thomson's assertion that target golf is as easy as that, but in reality, he's more correct than many would like to admit. Simply tee it up on a seaside track with 30 mph winds, firm, tightly mown fairways and rock-hard greens, and you'll find out. Iron shots that aren't hit cleanly will struggle to get airborne, and drives that balloon will wind up a good 40 or 50 yards shorter than expected.

Because the conditions are so much more challenging than those on most target golf courses, scoring on a links course demands a wider variety of shots. Trajectory control is key, particularly in scoring situations inside 100 yards.

In light of this fact, we retained the help of Guy Redford, who currently teaches at Dundonald, the newest course affiliated with the fantastic Loch Lomond Golf Club (designed by Kyle Phillips and located near the town of Troon). Redford is particularly well suited to provide links instruction, not only because he grew up playing in the brisk Scottish winds, but because he has been privy to many of the best traditional tips for scoring. Of course, these same techniques can be utilized anywhere the wind blows and where conditions are less than ideal.

On target-style golf courses, approaches from 100 yards and closer generally demand a high, spinning sand- or lob-wedge shot. When it comes to windswept links courses, however, this type of shot can be extremely difficult to execute, if not impossible. Not only does the wind interfere with both trajectory and accuracy, but the tightly mown or dormant fairways (depending on the time of year) make nipping clean wedge shots a difficult task. 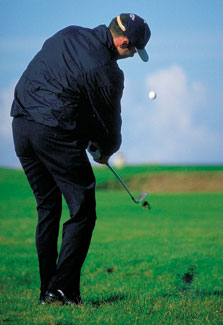 Instead, opt for a low-running shot that stays close to the ground and releases up to the green. This shot is one that target golfers probably don't try very often because of the soft fairways and greens, which are often guarded by sand bunkers. Obviously, this type of shot isn't appropriate in situations where the green is fronted by a hazard, but when the coast is clear, so to speak, it's one of the highest-percentage shots in golf.

To execute this shot, select a club that has less loft, such as a 7-, 8- or 9-iron. Position the ball back in your stance, with the majority of weight on your front foot. It's not necessary to hit down on the ball with a great deal of force, which will only add spin to the shot, making it more likely to be affected by the wind and the grass than a lower-spinning shot. Choke down slightly on the grip and take an abbreviated backswing. Then, simply concentrate on making solid contact with the ball, holding the clubface low through impact. This will help impart overspin on the ball, keeping it close to the ground and rolling hard toward the green.

The key to perfecting this shot, like any shot in golf, is practice. If you're not accustomed to playing low runners, it can be difficult at first to pick a target and determine how hard to hit the ball. You must learn to let go of mechanical, distance-oriented thinking and allow yourself to visualize the shot as it rolls along the ground and up to the green. Feel the shot and let your body do the rest. Of course, with experience, you'll better learn to judge the turf and wind conditions, which will make getting the ball close to the hole that much easier.

Although high-approach shots aren't normally associated with links golf, there are situations when it becomes necessary to loft the ball over a hazard. When confronted with this type of situation, there are several modifications to make that differ from the usual high-spinning shot normally played on target-style courses.

First, the wind must be accounted for. It can be coming from behind, in the face, right to left, or left to right. Each situation demands a different type of alteration in aim, which will be crucial to producing a favorable result.

For shots that must be started left or right of the flag, be sure to use the entire length of the green as a target. This way, if you misjudge the wind or the shot slightly, the ball will still land on the green. For downwind shots, be aware that the wind will tend to knock the ball down, bringing it in lower and harder than you might think. Be prepared to miss these shots long, and pick a target that will leave the easiest up-and-down possible.

Finally, when the wind is directly into the shot, don't be tempted to hit the ball harder. Always remember that an easier touch will produce less spin and help the ball bore through the wind. Although this is a high shot, it's still possible to hit the ball with a relatively low amount of spin. 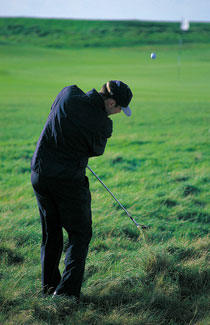 To execute the shot, address the ball in the middle of the stance to promote a slightly lower trajectory, and grip the club in the normal way. Always take enough club to ensure you'll clear the hazard, especially if the wind is directly into you. Again, it's important not to hit down on the ball too aggressively, but instead to ease into the ball, keeping excessive spin off the shot. And don't be overly afraid of landing in the hazard. Though it's not the desired result, you should always play with a feeling of confidence, not trepidation.

To execute this shot, set up as if to hit a bunker blast. Your weight should be favoring your front foot, and you should choke down slightly on the grip. It's important to open the blade of the club slightly, as you might when hitting a bunker shot. The thick grass tends to close the clubface at impact, taking the loft out of the shot. You must also be sure to swing down on a relatively steep angle. Otherwise, the club will get caught in the grass and lose the power necessary to extricate the ball.

At impact, be sure to accelerate aggressively through the grass and the ball. Any kind of tentative pass will result in a poor outcome. Also, don't release the club through the ball as you would on a full shot. Allow your left arm to chicken-wing slightly, which will keep the clubface square and moving toward the target.

This story was originally published in 2006