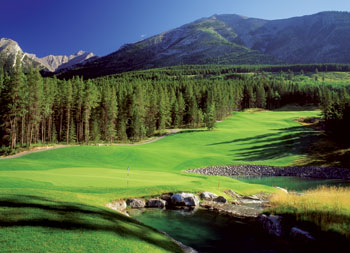 Instead of taking advantage of clear scoring opportunities from less than full-wedge distances, most recreational golfers unnecessarily struggle, often needing additional strokes to get the ball into the hole following a poor approach. Not only does this situation work to balloon your scores, it robs you of the momentum you might have gained had you made par or birdie._Ê Fortunately, it doesn't have to be this way. Over the next several pages, you'll find an easy-to-follow guide to hitting crisp and accurate approaches from short distances with varying wedges. If you can learn these techniques and put them into play when the situations present themselves on the course, you'll be in position to shave a good three to five strokes off your score and keep positive momentum active throughout your round.

Distance Challenge
The key to mastering short approaches is to learn how to hit the ball different distances with different clubs. Shots hit with a shorter or longer backswing and with more or less clubhead loft will exhibit trajectory characteristics that are better suited for some situations than others. For example, the 65-yard shot with a full lob wedge may not be the best play into a wind or if there's plenty of green with which to work. Instead, the 65-yard play with half-pitching wedge will give you more control and likely a greater chance at getting close to the hole. 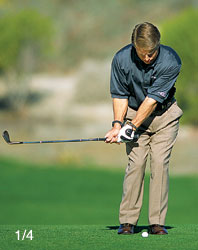 The Clubs
1/4
With your stance narrowed to a quarter of its normal width and your hands placed 1.5 inches from the top of the grip, swing the club back to a point where your left arm crosses your right pants pocket. Allow your wrists to naturally hinge. From here, swing the club to impact with an accelerating move.

1/2
Address a half-wedge shot by cutting your stance in half and by gripping down on the club a full inch. Swing the club back until your left arm is parallel to the ground. Don't forget to coil onto your rear leg on the backswing, and to allow your body to uncoil as you bring the club back to the ball and into the finish.

3/4
With a slightly narrowed stance and your hands placed a half-inch from the top of the grip, make a three-quarters backswing. From the top, execute a normal turn back toward the golf ball, making sure to line up everything at impact. Your swing should finish at three-quarters without the need to consciously halt its motion.

Full
A solid wedge full swing exhibits the elements of any full swing, including a full turn of the shoulders against the lower body, a shift in weight rearward on the backswing and toward the front leg on the downswing, and a natural release of the clubhead. Keep your hands ahead of the face to keep shots from ballooning. 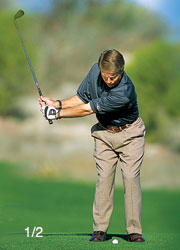 Players struggle on less than full-wedge shots for two basic reasons. First, they lack an understanding of the correct technique and, second, they fail to practice from different distances. Understanding the correct technique begins with understanding loft. In the 1970s, the standard loft on a pitching wedge was 50 degrees. On the sand wedge, it was 56 degrees, effectively creating a six-degree gap between the two. Today's standard for most pitching wedges is 47 to 48 degrees. The stronger pitching wedge lofts have created a larger gap between modern pitching wedges and the standard 56-degree sand wedge. My advice to players is to add a lob wedge with 60 degrees of loft and a sand wedge with 54 degrees of loft. This switch creates the desired six-degree gap among your highest-lofted clubs.

The Setup
The technique to hit less than full-wedges begins with the setup. The first adjustment is to grip down on the golf club. Specifically, a player should grip down one-half inch for every 25 percent they would like to reduce the distance of their shot (measure the amount you grip down on the club from your palm, not your pinkie). The reason behind gripping down on the golf club is that it decreases clubhead speed without your having to swing the club any slower. Usually, when a golfer tries to hit the ball soft, he or she will decelerate and hit the shot fat. Gripping down also allows the player to stand closer to the ball while maintaining the same posture, thus making it easier to contact the ball with a descending blow. 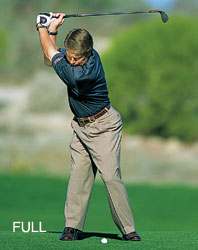 The Swing
The next adjustment the player should make is to narrow his or her stance. The percentage of stance width that should be narrowed should be equal to the percentage you wish to reduce the length of your shot. For instance, if you're hitting a half wedge, then you should stand with half the width of your normal stance. Narrowing the stance is important because doing so facilitates a proper weight shift when shortening the backswing. Think about it this way: With a shorter swing, it takes less time to swing the club to the top. Consequently, you have less time to coil onto your back leg. The only way to complete this coil with shorter backswing lengths, yet maintain proper tempo, is to narrow the width of your stance.

Once you've made the setup adjustments of gripping down and narrowing the stance in proportion to the length of the desired shot, the only thing left to do is to shorten the backswing. The key to shortening the swing is to focus on the left arm. For instance, to hit a half wedge, the left arm should be halfway back, or parallel to the ground. (Same goes for quarter- and three-quarter-length shots). Since many players haven't practiced shortened swings, they lack the awareness of where the backswing stopping point lies. Those players need to rehearse and feel these positions until they're aware of where they are in the backswing.

Once you complete your backswing, regardless of length, there's only one thing left to do: accelerate. The most common mistake in mid-wedge play is deceleration. Most players have too wide a stance, too much club and too long a backswing to hit their shortened wedge shots. When one or any combination of these mistakes exist, the natural reaction is to slow down, since you instinctually know you have too much club or completed too big a backswing. The typical results are fat and thin shots.

By practicing quarter-, half- and three-quarter shots with each wedge in the bag, you'll be able to accurately gauge the distance for each shot. The distances in-between will ultimately become a matter of feel. Players who haven't practiced their quarter-, half- and three-quarter shots leave too much margin for feel, often having no real idea how far back to swing the club for their given shot. That player will always struggle to control their distance and will certainly lack the needed confidence.

One other benefit of practicing and developing this system for your wedge play is that once your distances are defined, you'll be able to hit wedge shots the same distance, but with different trajectories. This gives you multiple shotmaking options. For instance, on one hole you may have a 65-yard shot to a back pin into a stiff wind, so you opt to hit a little more than a half-wedge. On the next hole, you turn downwind, but have the same 65 yards to a tucked pin, so you opt to hit a fuller lob wedge. These are fine points you can develop once you've built your base system.

The bottom line is that if you put the time into working on this system, you'll learn to be able to control the distance and trajectory of the ball for all your wedge shots that are less than full. When you're on the course and you've figured out the distance you want to carry the ball, you'll be able to choose a shot that gives you the best access to the pin, given the conditions. Most of all, when you're standing over the shot, you'll have confidence because you've had the benefit of practice and, more importantly, experience. The final outcome is that you'll save more pars and, hopefully, have a few more birdie chances.