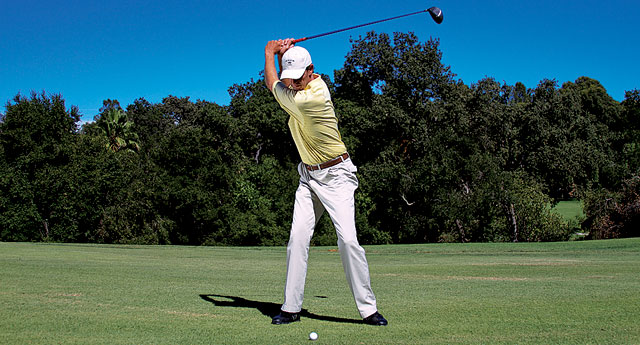 Let's face it. The driver used to be placed off the deck a lot more often than it is now. Older drivers not only tended to be smaller, but they also had more loft, which helped golfers get the ball up in the air off the ground a little easier. Also, with the advent of today's fairwood technology, it's safe to assume that some of today's fairway woods are longer than the drivers of as little as 10-15 years ago. That said, hitting a driver off the deck can still be a useful shot, if you know when and how to play it.

Before you decide to hit the driver from the fairway, make sure you have a good even lie (and please, don't try it from the rough). Second, don't position the ball quite as far as you normally would with a tee in the ground. Back up the ball to about where you play your fairway woods. Now's when trusting it comes into play. Too many amateurs try to add loft to the driver by hanging and trying to hit up on the ball. This not only will rarely work, but also can lead to really fat or thin shots. Instead, trust that the design of your driver will do its job. Most driver heads are designed to impart more spin on the ball when struck on the lower half of the clubface. So don't try to lift up on it. Make a smooth, level swing with the driver and let the club do the work!

Try this a few times out on the range before you put this shot in play. The typical ballflight with this shot is a low fade, so plan accordingly on the golf course. You'll soon see that the driver off the deck is a great shot for keeping the ball low and out of the wind, all while flying a long way. Stay level and finish on your forward side.