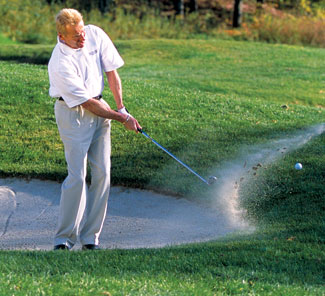 Part of being a skillful player is reading the situation, choosing the right shot and then being able to execute that particular play. Taking into account all your options is important, but most golfers never consider the versatility the game allows. For example, when faced with a bunker shot, most golfers think blast. But in some situations, thinking chip may produce the better result.

There are three conditions that should trigger your consideration of the sand-chip. The first thing is your lie. If the ball is sitting up so you can get the clubhead cleanly on the ball, the chip is a possibility. The second factor is the height of the lip. The sand-chip features a low trajectory, so you can only use it if the bunker has a very low lip. The third factor is the location of the pin–the sand-chip will run with very little spin, so it’s ideal when there’s a lot of space between the ball and the flag.

The sand-chip also is the shot of choice when the pin is on a tier where it would be all too easy to hit a normal bunker shot a foot too short and spin it back down the slope, leaving you a long, difficult putt up a steep slope.

When all three of these conditions are present, you’re primed to make your chip from the sand.

Three Adjustments
Unlike the regular bunker shot, where you take sand before you contact the ball, the idea of the sand-chip is to catch the ball cleanly, then take a bit of sand. To carry out this ball-first mandate, you need to make several adjustments to your normal chipping technique.

First, choose enough loft to clear the lip of the bunker. Select a club that will land the ball about two paces on the green, where it will run the rest of the way to the hole. That being said, don’t err by choosing too much loft–use the least amount of loft that will still carry the ball over the lip. 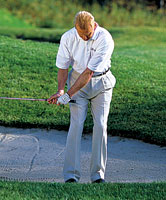 The Technique
Play the ball opposite the back foot and with your hands forward so that the shaft points at your lead shoulder. This helps ensure a low, running shot that tracks like a putt. Open your stance and bend

from your hips with your elbows bent and flared out from your sides, similar to how they bend in your normal putting posture.

The stroke is made with little wrist break and by keeping the majority of your weight on your front foot. The fixed wrists allow the butt end of your club and the clubface to move together back and then through the golf ball. The most common error is to drop down into the ball in an effort to lift it into the air. This destroys ball-first contact. Make sure you keep your spine angle intact until the ball is well on its way.

The chip from the sand requires a technique that needs to be practiced before you use it on the course. To accelerate your learning curve, draw a line in the sand in front of the ball (on the target side) to remind you to take sand only after contact with the ball is made.

PGA professional Dr. T.J. Tomasi is regarded as one of the top 100 teachers in America, and is one of the most widely published authorities on the golf swing. He’s currently director of instruction at Lyman Orchards GC in Middlefield, Conn.