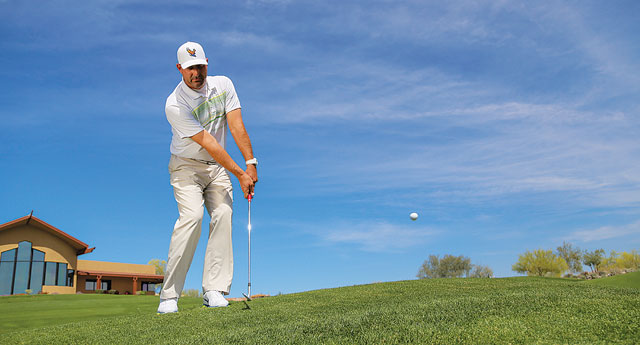 In case you haven't noticed by now, the fastest way to lower scores comes from having a tidy short game, specifically, a strong ability to hit effective chip and pitch shots from around the green. There's also a residual effect from having a good short game. When you chip well, you don't feel pressured to hit every green, which ironically, leads to hitting more greens! Let's look at a handful of short shots that will help you gain confidence and shoot lower scores.

BETTER CHIPPING
I'll tell you this, I've shot some pretty decent scores in my day, and some of them I did while hitting less than 50% of the greens. Sometimes, I've even been well below that 50% number and still managed to salvage some decent scores.

The key is having good technique. If you look at the sequence on the opposite page, you can see the classic "chicken wing" position post-impact. This happens when the mind and body both feel the need to lift the ball up, instead of allowing the loft of the wedge to do the work on its own. In this photo, check out how low the clubhead is post-impact. See how low it is? That's what you want for solid chipping contact. There's no lifting or pulling up with the hands–not ever, actually.

TRY THIS
You've maybe tried some unorthodox putting grips to help cure the putting yips, but have you ever tried one with your chips? The key to better chipping is quiet hands and wrists, and using an unusual putting grip like the one you see here actually can help you. Grip the club with your normal left-hand grip, and then put your right hand to the side and tuck the grip into the fold of the thumb and index finger. You can't get cutesy with the hands using this grip, and you'll quickly feel what a proper chip stroke feels like.

CHANGE YOUR SETUP FOR VARIETY

LOW SHOT
Once you get into the prescribed setup position for hitting a low shot, there's one more variation I want you to include. Get the shaft vertical! When you do this, not only do you de-loft the wedge at impact, you allow it to be swung more like a putter, which will help keep the ball low. Remember to keep the hands quiet through the stroke, limiting wrist hinge on the backswing and into the finish. With practice, you may find this low-chip shot to be a very useful one when you have a shot that requires only a small amount of carry and a lot of rollout.

MEDIUM SHOT
To hit the medium shot, again, the key for success is to rotate the body and keep the hands nice and quiet. As you can see in this sequence, my wrists don't hinge that much, and I manage to keep the clubhead low on the way back and low through the followthrough. You can see the back of my watch in all four photos. Also, notice how, through impact, my shoulders have rocked and opened, along with some opened rotation of the hips. That's actually how I recommend you hit chip shots, and use the rotation of the upper body and not the small, hard-to-control muscles in the hands and fingers.

HIGH SHOT
Hitting the high shot means taking the high-shot setup and then lowering the hands so the shaft is on a flatter plane. When you do this, you allow for more wrist hinge going back and through, which helps hit the ball higher in the air. Notice, though, that my basic motion isn't much different than the medium shot. I still rotate mostly with the upper body and use my body as the main source of momentum for the stroke, not my hands.

OPEN UP
Hitting out of the sand is one of those areas where I see students struggle. And the funny thing is, bunkers are where we tend to place the lowest expectations, meaning that most of us are satisfied just to get the ball out of the sand, and if we happen to knock it close to the pin, that's a bonus.

To ensure sand success, I like to make sure we can get the ball airborne. Doing that means opening the face and using more bounce under the club. The more open you get the face, the more aggressive you can be with your shot, and I find that being aggressive is almost always better than getting too willy-nilly and trying to finesse it. So open the face and strike the sand behind the ball with more momentum than you're maybe used to.

ACCELERATE
You've probably been told that it's important to accelerate the clubhead when hitting in the sand, and while I agree with that, that doesn't help if you tend to strike down into the sand on too steep an angle or you accelerate and then stop the moment the club enters the sand. Instead, I want you to use the wrists to accelerate the club, allowing the back of the clubhead to hit the sand, not the leading edge. This maintains and even accentuates the bounce of the club and prevents you from digging too much. It will also produce the "thump" sound in the sand, not the "thud" that amateurs often hear. So don't try and dig or gouge the ball out of the sand. Opt more for bouncing the club off the sand and let it enter and exit the sand with an accelerating stroke!

TOSS SOME SAND
Want to make sure you're in the right position at the top of your backswing when hitting from the sand? Try this fun drill. First, gather a clump of sand on the face of your wedge as I have here. The rest is simple. I want you to imitate your bunker swing in slow motion, and be sure you hold the sand on the face long enough so you're able to fling the sand behind you as you can see in the lower-left photo. If you can do that, you'll do a great job of holding the face open to your path, which then makes it a lot easier to get the ball up and out of the sand.

DROP IT!
By allowing the sand to fall behind you and not slip off the face early in the backswing, you'll be less likely to strike the sand with a square or even closed clubface. It takes some repetition to achieve, but after practicing this drill a few times, you'll develop a strong sense of the clubhead through the stroke and avoid digging too much into the sand. Give it a shot!

Derek Nannen, PGA, is the director of instruction at the Eagle Mountain Golf Academy in Scottsdale, Arizona. Visit eaglemtn.com for more information.