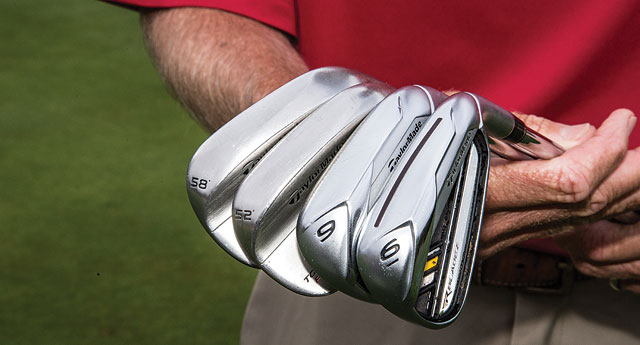 Hey, sometimes no matter how well you practice and prepare to play your best, you're going to have days where you struggle to hit greens and shoot lower scores. This is what makes the short game so important. You can have an off day when it comes to ballstriking, but if your short game is good, you can save some serious strokes and prevent what otherwise might have been a disastrous round. The following pages outline a few shots (and shotmaking decisions) that you ought to know come time to save a round of golf that just isn't going your way. Follow my advice, and you'll take pressure off the rest of your game and still shoot some decent scores.

CHOOSE WISELY
When it comes to hitting short shots around the green, don't limit yourself to just one club. I use a variety of irons and wedges, depending on what type of shot I face. And, yes, I do use a 6-iron from time to time. It's a great club for hitting short shots with maximum roll.

PLAY FOR MAXIMUM ROLL (WHEN YOU CAN)
Speaking of maximum roll, it's always easier to control the ball while it's on the ground versus when it's in the air. The simple (and not only) reason is, the sooner you get the ball rolling, the less you have to worry about where the ball should land and how much spin will affect the shot. If you normally fly the ball closer to the hole with hopes it will check up consistently the way you want it, I have news for you: It won't. Your lie, the slope you're on, even the firmness of the green and your contact, all affect how much backspin you'll have on the ball. So, instead, plan on using as much green as you can, and get used to practicing your chips that roll more than they fly. This isn't always the case for every shot, but for most, more roll is the way to go.

MANAGE YOUR SET UP
I've been teaching golf for many years and I'm still surprised to see so many players ignore the importance of setting up correctly for chips and pitches. Usually, they lean back and hope to lift the ball up into the air.

To clear the record, setting up for a short shot is just as critical as any other. Get into an athletic position with the hands forward, the ball slightly back in the stance and your weight centered, or even slightly forward, if you prefer. Remember, you have plenty of loft, so no need to hang back and try and lift the ball up. The loft will do the work for you!

Another cause for poor chipping is from too much backswing motion. If you take too big of a backswing, you're likely to decelerate at impact, causing the hands to flip (scoop) and the arms to constrict, two things that you want to avoid come time to chip better.

Try to limit your backswing, and remember, even though it's a short shot, you have to accelerate through the hit. That means the clubhead should be moving its fastest after contact with the ball, not before.


Hitting a pitch out of thick rough requires a steep angle of attack to ensure ball-first contact. To create that, it doesn't mean you lift the club up abruptly on the way back. All you have to do to steepen your angle of attack is add some extra hinge to the wrists.

As you start the backswing, hinge the wrists quicker than you would normally. This will steepen your swing considerably. The key is not to overdo it! Hinge your club so the left arm and clubshaft form a 90__ angle. Any more hinge than this is too much and you'll struggle with releasing the club through impact. So stay tilted and follow through, and don't be afraid to make a divot!


HEAVY ROUGH? HIT THE TEE
Here's a great drill/swing thought for managing the rough. Imagine the ball is on a tee. The goal with the shot is obviously to extricate the ball, but more importantly, you want to hit the tee, as well. The best way to clip the tee is to swing aggressively and hit it with the leading edge of the clubhead. If you actually can lift the tee out of the ground, that's even better.

Go ahead and try this drill without a ball and do it a few times until you can consistently clip the tee. It doesn't have to come out of the ground, but if it does, it's a sign that you're doing it right. Next, play some pitches from deep rough with the same visual picture. Imagine the ball is nestled down in the rough on a tee and you need to hit that tee with the leading edge of your club.

Do that, and you'll instinctively swing a little harder with more acceleration, which, by the way, is another must-do from the rough!

STAY CONSISTENT WITH THE SLOPE
Most greens slope, to some degree, from back to front. And, coincidentally, most missed approach shots end up short of the green, meaning you're going to have a few uphill chips every now and then. The trick is to mimic the slope as best you can. Align your setup along the angle of the slope with the ball in the back region of your stance. As you swing, keep your weight over your left leg. If you slide to the right leg, you'll get stuck there and have a hard time making good contact with the ball.

RETURN TO SETUP
When it comes to the full swing, your setup and impact position ought to be pretty different. But when facing uphill chips (or sidehill and downhill ones, for the matter), the goal is to remain stable and limit as much motion as you can. This is why I like to see my students get back to their setup position at impact when hitting delicate chips and short pitches off uphill lies. (Notice that, at impact, I haven't rotated at all.)

Try to keep your weight stable over your left side and make a short, controlled stroke that, at impact, looks just like your setup position. Because of the slope, you're basically hitting up a ramp, so use a less lofted club to control the trajectory. Also, use a rocking motion of the shoulders as the driver of your stroke, much like you would with a putter.

STAY CENTERED!
The first and foremost goal from the sand is to get the ball out of the sand. Ironically, to get the ball up and out, you have to swing down and through! To ensure you hit down into the sand, make sure you keep your weight favoring your left side. If you drift to the right, you'll likely release too soon and hit too far behind the ball. Instead, swing from the left side and finish on the left side with the clubhead in a low position post-impact. Hit down and through the sand behind the ball, not up and away.

SEE THE TEE...AGAIN
Whip out that tee again! Like the shot from the rough, trying to clip a tee beneath the ball is a great drill to help improve your ability to escape the sand.

Having the image of breaking the tee will ensure that the clubhead is deep enough into the sand and that you're accelerating through the shot.

Try this drill until you can consistently hit the tee underneath the ball. Then use a ball and see how easy it is to get it out of the sand!

STAY UPRIGHT
If you're finding some success from the sand, but still struggle with hitting the ball up and over high-lipped bunkers, consider a swing that's more up and down and not around, i.e., get steeper and more upright. This will make it easier to strike the sand with a square or open clubface. If you tend to swing on a flatter or more rounded swing plane, it's likely you'll strike the sand with less loft on the clubface. Also, a steeper swing engages the wrists, and they tend to hinge and unhinge more actively in the swing. More wrist action coupled with a descending blow into the sand behind the ball will help prevent you from digging too much. Try to get steep and engage the hands more. You'll hit it higher!

Sometimes when you really miss, you find yourself on surfaces that you probably never practice on. So is the case with a tight lie on hard dirt (aka hardpan). To play this shot successfully, imagine it like you would play from the sand, only with a few modifications. First, don't open the clubface. If you do, that will add unneccesary bounce to the shot, making it impossible to make clean contact. Second, play the ball slightly back in your stance so your swing's lowpoint is just in front of the ball. Next, make a steeper bunker swing and descend into the ball. Unlike the bunker shot, you want to catch the ball first, not the dirt!

After impact, don't restrict the hands from releasing and turning over. Instead, keep them low and allow the clubhead to swing through the hit faster than the handle does. Think in terms of trying to make a divot in the dirt after you make contact with the ball. The hardpan is firm, so if you catch the ground anywhere before the ball, the clubhead will bounce up and cause a skulled shot. So hit down on it!

CHOOSE THE RIGHT BOUNCE
Choosing the right bounce on your wedges can help more than most golfers know. A great place to start is by evaluating the types of courses you normally play. If you play on soft, wet or fluffy grasses and rough areas, consider using wedges with more bounce. If you play on tight and firm surfaces, lower-bounce models may help. Also, know that as you work your way down in loft with your wedges and into your irons, you're also working your way down through clubheads with less bounce. So if you need to hit a shot that requires ball-first contact off a tight lie, consider using a lower-lofted wedge or even a short or middle iron to get the job done.

PUT WITH AN EDGE
Or maybe we should call this tip "Putt With A Wedge." Either way, the concept is simple. If you find yourself with the ball against the collar, using a wedge's leading edge to roll the ball may be a lot easier than trying to make solid contact with your putter. To hit this shot, simply set up the same way you would over a putt and make your putting stroke. The goal is to try and catch the ball's equator with the leading edge of your wedge. It may seem tricky at first, but with a little practice, you'll find it's easier to do than trying to hit down on the ball with your putter, which actually pushes the ball farther into its indentation on the green, causing it to pop up and roll somewhat erratically.

As Dan Martin states in his article "Use Your Senses" in this issue, putting with a wedge also helps with improving your putting concentration, so it's a win-win, as far as I'm concerned!

One thought on “Short Game Strokesavers”