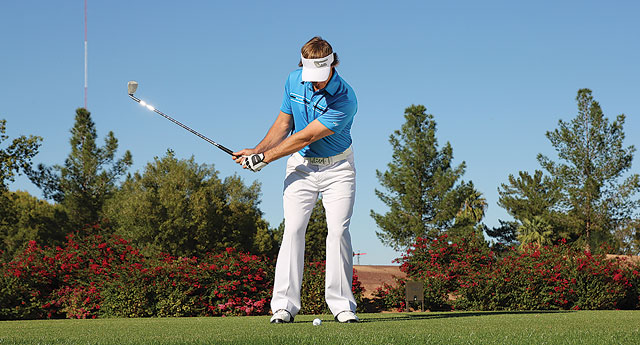 The secret to shooting lower scores isn’t hitting longer drives and hitting more greens. Sure, doing those things can lead to more birdies and pars. But to shoot really good scores, and to stay consistent, you have to keep your short game up to snuff. No matter how hard you perfect your swing, mistakes are going to happen (we’re all human), and you’re going to miss a few greens and be faced with some shots around the green. It’s here where amateurs waste a lot of strokes. So I’ve put together a handful of tips and swing thoughts that’ll help you tighten up your short game and start shooting lower scores.

Let’s get started, shall we? Class is in session!

Get Low To Shoot High

So you want to hit a high pitch or flop shot over a bunker, tree or some other obstacle? Here’s what I suggest. Think of a basketball player about to spring up for a quick rebound after a missed free throw. Have you ever seen a power forward try to jump from the upright position? Probably not. They squat down, load up power and release and extend up to jump and get that ball.

In pitching, obviously, there’s no jumping and rebounding. But a common adjustment you’ll see all of your favorite players make is getting a bit lower with the legs and handle of the club. Notice the contrast in styles between a high pitch and basic chip seen here. Adopting this setup posture, while also pulling the handle slightly away from the target with an open face, is the perfect start to a skyward launch!

NO!
The opposite of the high shot is the low-running chip. Here your posture will be much taller with the feet narrowed to about the width of a clubhead. Although it’s commonly taught this way, getting the ball way back with the shaft leaning considerably forward can prove to be a disaster, as this alignment can produce too much dig, with the leading edge into the ground. A big no-no.

YES!
A ball that’s more in the center, along with a shaft that has a little forward lean, will produce much better results. Keep in mind, the bottom of your swing will occur where the buttons of your shirt are; as long as your chest is a bit forward of the ball, there’s no need to have it way back in your stance. With the shaft leaned only a bit toward the target, you’ll maintain some bounce on the sole, which allows the head to slide through the grass without the dig!

TRY!
Not convinced? Try this drill. Stand firmly on your left foot with your right foot drawn back and toe pointed down. All of your weight should be on your left side with the center of your chest over the front foot. Position the ball forward in line with the laces of your front shoe. Hit some chip shots from this position and you’ll quickly see that perfect contact is more a component of chest position relative to the ball, not ball position relative to the feet!

If folding up creates height, then widening things out a bit will produce the opposite effects. Allow your arms to extend on both sides of your swing with minimal wrist action. You’ll create a shallower strike with less speed, thus creating a lower launch.

To hit a high pitch, or flop shot if you will, I like to think of keeping my hands and arms close to my body. Doing this means I have to allow my wrist and elbow joints to quickly fold up on both sides of the swing. As you can see in these contrasting sequences, one shot is for a low runner, while the other is for a high floater. The high shot has what I call “fold and throw.” That means, in addition to the arms and hands folding close to my torso, the clubhead is allowed to “throw” a bit past the handle into the hit, as well, as a means of creating maximum loft.

Hitting creative shots around the green is a component of understanding how to control distance and trajectory for any situation. Being that wedges are designed for shotmaking versatility, this process largely involves learning how to use your hands to deliver a variety of lofts with the same club.

Here I’ve hit a flop shot, and my hands played a pivotal role in doing so. The following page shows you what hand I used to hit this shot.

On the other hand (literally!), hitting high flop shots tends to be a right-hand-dominated move. To practice, grab a sand or lob wedge with just your right hand. Create a wider stance and try to hit a few flop shots. At first it’s pretty challenging, but this one drill has cured the pitching woes of some of the world’s best players. The key is to be patient and swing in rhythm. That means allowing your body turn and arm swing to work in harmony without trying to “muscle” the shot. Let gravity work in your favor, and contact will effortlessly occur. Just as the left-handed swing was dragging the handle toward the ball, the right-handed swing will actually feel as if you’re “throwing” the head past the handle through the hit. This motion produces maximum loft, sending the ball easily up and over.

Another great way to control the trajectory of your pitches, and also to gain better feel and rhythm is to hit shots swinging with only one hand. To start, let’s look at how the left hand works. A left-handed swing employs what I call “drag.” This means that the driving of the left hand forward into the strike effectively pulls the handle ahead of the clubhead. This handle-first attitude, delofts the face producing a low-running hit.

After a few practice strokes, go ahead and swing with both hands, but in your mind, still focus on feeling a left-hand-dominant movement. You’ll be surprised at how quickly your chipping will turn the corner with this one simple drill.

In the bunker, here’s a swing thought I want you to have. The sand shot really isn’t that unlike any other shot, except for the fact that you’re hitting off the sand. It’s the only shot in golf where you’re better off hitting an inch or so behind the ball! That should make things easier, right? In a perfect world, yes, it does. But too many amateurs overcomplicate the bunker shot, thinking they have to shovel the ball out of the sand and lift it to safety. When, in reality, a bunker shot is a pretty easy one.

Try this the next time you find yourself in a greenside bunker. Pick a target about an inch behind the ball. Once you get it, ignore the golf ball completely. Don’t even look at it. Stay focused on that spot, and set up over that spot as though a golf ball was right on top of it.

Once set up, here’s all you need to do. While still focusing on that spot, I want you to swing your wedge and scoop a dollar-sized divot of sand right on top of it and try to splash that divot onto the green. So that means you need to hit it hard enough, deep enough and with enough speed in order to blast your divot out toward the hole.

Try that. Take the focus off the golf ball, since you’re not trying to make clean contact with it anyway. The goal is to hit the sand behind the ball, and let the mound of sand formed between your ball and clubface lift the ball softly into the air and up onto the green. With a few tries, I bet you’ll start swinging more confidently and aggressively in the sand, which are two keys toward becoming a better bunker player. 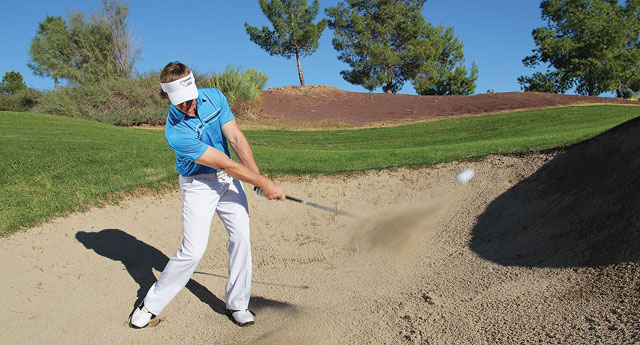