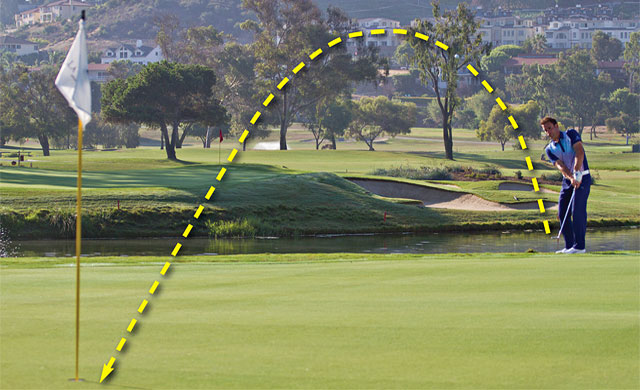 When you think about it, short shots don’t get the attention they deserve. Much has been said about hitting long drives, even making crucial four-footers. But what about the shots in between shots? The short game is arguably the easiest place on the course to save strokes and shoot lower scores. It’s also a great place to waste strokes, if you aren’t doing things properly.

Let’s take a look at some of my favorite shots from around the green to help increase your prowess from 50 yards and in. Keep in mind that the short shots are what you should probably spend most of your practice time on (we can argue whether putting requires more/less time later), and learning to be creative is key to getting up and down.

You’d be surprised how many students don’t know the proper mechanics for the basic chip shot. It’s not the most complicated shot in the book, but it’s probably one of the most overlooked.

To hit a good chip shot, I encourage all my students to play the ball off the right instep and stack their left arm over their left leg. This will naturally position your weight predominantly on your left side, and also level out your shoulders a little more.

When it comes to the stroke, I actually don’t think there’s one right way to get the job done. Some are better at chipping using a body-driven stroke and quiet hands, while others are better at a more handsy motion. The key, no matter what stroke you employ, is where you are at impact. As you can see here, my impact position (third photo above) is relatively close to what I looked like at setup (even though the photo caught me slightly postimpact). With a full swing, mimicking your setup isn’t such a good idea, but with short shots, it can be really useful.

Another tip I like to give my students is to keep the left hand flat through the stroke, especially at impact. Try it yourself and keep the back of your left hand flat and firm through the stroke. See if it helps with your impact while chipping. If you tend to collapse the left hand during your chips, you’ll have a hard time staying consistent and hitting solid chips. But with a flat left hand, you’re consistency will improve almost immediately.

If you really need to elevate the ball off the ground and get the ball in the air, follow these guidelines. First, don’t set up to the ball and then open the face! Instead, grip the wedge with an open face first, then set up to the golf ball.

Second, get aggressive! The flop shot isn’t really a finesse shot. It’s a power shot, and you have to accelerate through the stroke. So get ready to swing harder than you would when hitting a regular pitch from this distance. Third, don’t go to great lengths to try to lift the ball up into the air. To add that necessary loft, situate the clubshaft with some negative shaft lean. By that, I mean play the ball a bit forward in your stance and lean the shaft away from the intended target. From here, stay aggressive and allow the hands to release through the shot!

Another good rule of thumb for this shot is to keep your hands close to your body as you hinge, unhinge and hinge again through the followthrough. By staying close, you’ll be forced to hinge a lot quicker. That’s the trick for hitting high flop shots, folks.

Sometimes pitch shots that fly high and stop quickly aren’t the types of pitches you want to hit. What if you want a midheight flier that takes two hops and releases 3 to 6 feet toward the hole? For this type of result, try the dead-hands pitch shot.

To hit this shot, the critical variable is how the hands work through the stroke. In essence, the hands ought to deaden. By that, I mean the hands are merely an extension of the arms. Yes, you hinge your wrists and they release, but they do it a lot slower and later in the stroke. So, to hit this type of shot with dead hands, you have to be ready to turn more with the body through the stroke. In the photo sequence, notice how much my body has rotated through the strike. That’s what you want. Also, in the finish position, check out how low my hands are and how the shaft is practically horizontal. That’s an indicator that I’ve hit this shot by using the rotation of my body as the driving move, not the release and flick of the hands.

Try this shot on your own and imagine having dead, inactive hands. You’ll hit softer pitches that fly lower and have some release when they hit the green.

One of the most practical short shots when you’re perched above the green that’s sloping away from you is the cut toss shot. It’s a shot with some added backspin to help slow down the ball when it lands on the green. To hit this shot, first weaken your left hand and get your left thumb to rest on the top of the grip. This will prevent you from closing the clubface at impact (we don’t want that here).

Second, play the ball a little forward in your stance, and open your feet to the left of the target. You want to actually swipe across the ball while the club is moving forward, and opening your stance makes this easier to do. From here, address the clubface at the target and swing along your feet line. Let the club stay open to your path (but square to the target) as you make the stroke, pinching the ball between the ball and turf. Finish the move with the hands low and to the left.

The short-sided bunker shot is one of the toughest shots in golf, even for seasoned pros, but with the right know-how, you’ll have better luck. First, because you need to get the ball airborne quickly, you need to swing with a wide-open stance and an open clubface. So set up with the face square to the target, only open your stance way to the left. The ball should be 1 to 2 inches forward of center, just ahead of where the wedge bottoms out in the sand (it’s a good idea to experiment with the correct ball position for your swing). As you swing, don’t swing the wedge toward the target! Swing to the left, hold that face open and splash that sand, meaning take about a 1- to 2-inch-deep divot underneath the golf ball.

Second, I like to think of making a V in the sand, based on how far I am from the target. If I’m close, I make a wide V, where the left line of the V is my feet line and the right line is the target line. As always, you should swing along the feet line! The farther back you go, the more narrow your V becomes.

Try this next time you’re in a bunker. By simplifying things in the sand, you’ll get a better feel for your natural bunker-shot style and start hitting better sand shots.