In grade school I can remember my math teacher standing at the chalkboard trying to explain some abstract topic like the Pythagorean theorem, square roots, or prime numbers proudly touting “mathematics is present in everything we do in life.” One of the more useful topics that year was the concept of common denominators in fractions. Defined by the dictionary as a feature shared by all members of a group, when applied to the game of golf it could be something present on every shot like the grip, or stance width, or ball position. In the short game — golf chipping tips particularly — we also have common denominators, or parts of the swing that are present in every shot we hit from the smallest chip shot to the largest pitch. Get these pieces right and you’ll be well on your way to hitting it closer to the hole and having more fun around the greens. 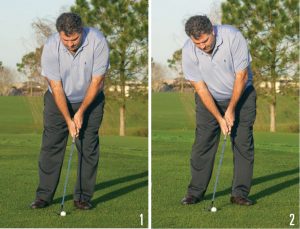 The swing motion in the short game is very different from you see in the full swing. The length of the swing is often much smaller and the body moves much less. It stands to reason then that the set-up should also be different. In order to properly control where the club strikes the ground you have to make a few adjustments:

Photo 1: Here you can see the shoulders are level with very little tilt and the spine is vertical to the ground. The chest is moved forward 1-2 inches with the weight favoring the lead (left) leg.

Photo 2: That’s very different from the normal, full-swing set-up you see here with a tilted spine and lower trail (right) shoulder. The weight still favors the lead leg but is accomplished by pushing the lead hip toward the target. 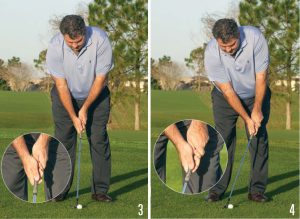 Associated with the change in body position and weight distribution at setup, the lead arm and grip are also important. Being able to manipulate and manage trajectory in short game shots is a necessity and a functioning grip and lead arm is important in allowing the club to work properly.

Photo 3: The arms are soft and bent, hanging directly under the chest. Both hands are placed on the club in a neutral to slightly weak position with the thumbs directly on top of the grip.

Photo 4: The position of the hands, arms, and grip in this image is problematic. The arms are straightened and stiff, pushing the club and hands forward toward the target and out from under the chest. Both hands are placed in a very strong position on the club with the thumbs rotated to the side
of the grip. This position makes it next to impossible to release the club properly and control trajectory. 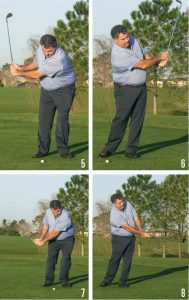 Managing the speed of the club is a must for distance control when making shorter swings. This is one of those crucial golf chipping tips. Excessive acceleration or deceleration of the clubhead through impact is a consistency nightmare and making sure the swing length is symmetrical on both sides of the ball is the best way to manage the clubhead speed and distance control.

Photos 5-8: In these images you can see two different lengths of backswing, each correlate to a finish position that matches in size. The distance the ball travels in the air can be controlled by the overall length of the swing; the swing length in the top images (Photos 5 and 6) would hit the ball much farther than the bottom image (Photos 7 and 8). 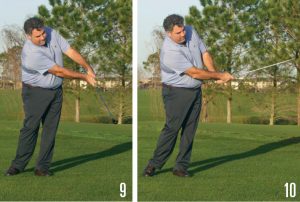 Common advice throughout the golfing world is that you should always “hit down” on the ball and keep your “hands ahead” through impact. While both of those statements are usually true in the full swing, things aren’t so simple when we’re talking golf chipping tips. Golfers often make a serious error trying to follow that advice and it can lead to very poor performance around the green.

Photo 9: Here you can see what happens when you try too hard to “hit down” or have your “hands ahead” through impact. It leads to an awkward finish position that can lead to mis-hits and distance control issues. 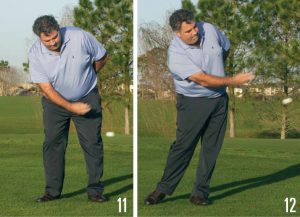 COMMON DENOMINATOR 5: ‘GO WITH IT’

There is no doubt that our bodies move differently when making less-than-full swings, as the motion is smaller and slower with much less momentum. However, you should still make every effort to move your body athletically despite the small and slow nature of short game technique. Too many times golfers stay flat-footed and don’t allow the body to shift and rotate naturally as the club swings toward the target. Think about how you would move if you were simply throwing a ball underhanded off the side of the green. If you’re not moving the same with a club in your hand then you’re living dangerously!

Photo 11: Nobody with any athleticism would throw a ball this way … weight hung back with the body rigid and stiff as the arm throws the ball.

Photo 12: In this image the body is moving much more naturally to the throwing motion … weight gently shifting toward the target and body slightly rotated open as the arm crosses the chest to throw.

Allowing the clubhead to release properly through impact is paramount to hitting the high, soft floating ball that lands gently on the green and stops near the hole. This drill will help you to get the feeling of what an appropriate release should feel like.

Photos 13-15: Place three balls on the ground in line with the target approximately 12-14 inches apart. Setup to the mid-dle ball with it slightly forward in your stance and try to hit it without touching either of the other two balls on the ground. If you can pull it off it means your swing has the right amount of “UP-DOWN-UP” and you’ve released the clubhead properly. Get it right and you’ll be hitting it higher and softer than ever around the greens.