The short game is where you can save the most strokes. You can hit only so many 300-yard drives or stiff iron shots from the rough or fairway. Inevitably, you're going to hit an errant shot from time to time. But the short game, specifically with regards to your putting, is the one place where you can strive for consistent results. And no, that doesn't mean you'll drain every putt, but with the right fundamentals, you can make a lot more putts than you would with poor fundamentals and the wrong kind of practice routines.

I'm here to share a few of my favorite tips and drills to help get your short game back on track, especially if you haven't been playing much golf lately. To get started, check out the picture to the left. Notice how my eyes are closed? That's not a mistake.

Practicing with your eyes closed is a great way to retrain your body and mind to get used to making smooth, pendulum-like putting strokes. If you want, go ahead and set up over a golf ball on the practice green. Read the putt, judge the distance, then close your eyes and stroke the putt. Then open your eyes and judge the results. Keep practicing until you can gauge the length of the putt with your eyes closed. This will, in turn, help train the body to recognize how hard to stroke a putt from varying lengths from the hole.

Now, let's get down to the nitty gritty. All great putters have a solid setup, which in our case, means setting up to the ball in a comfortable and athletic position. In the photo above, notice these few key points: The ball is positioned slightly forward of center. This will help me catch the ball on a slight incline, thus helping the ball roll faster with an end-over-end roll. My head is centered and square to the target, and my hands are slightly in front of the ball. This slight forward-press position also helps me make a solid pass at the ball and hit the center of the putterface.

But, you may be asking, Which arm should drive the putting stroke? The reality is it's both. The left arm is the puller, and the right arm is the pusher. The key is to use both arms in unison to prevent the hands from collapsing through impact. If you do that, the putterhead will outrace the hands (see top left photo, opposite page), and you'll have inconsistent results. But, if you manage to keep the hands working in unison, the upper body will become more engaged in the stroke, and it's likely your wrists won't collapse, and smoother strokes will be easier to attain. I like to use a golf ball between my wrists as I practice, as a handy reminder.

BAD!
If your wrists break down through impact, you have a problem. In fact, if the putterhead is ever in front of the hands, you run the risk of actually hitting the top half of the ball, causing it to dig into the green and pop up off the ground immediately after contact.

GOOD!
Eventually the putter will release and outrace the hands, but in this photo, you can see my wrists are still ahead of the clubhead, relative to the shaft. Strive for this followthrough position and you'll quickly see results.

Putt With Left
With only your left hand, try to maintain a flat wrist through the putting stroke. This will help with consistency and contact.

Putt With Right
Using only your right hand, try to hold the angle formed by the back of your right wrist through the stroke.

Controlling the distance of your putts, both long and short, is a task many amateurs overcomplicate. To simplify, check out the photo above and notice the four tees and the ghosted putterheads above them. The two outer tees represent a longer putting stroke; the two inner tees are of a shorter stroke.

Now here's the kicker. Whether you have a long or short putt, the same rhythm ought to be used for both. In other words, long putts don't need to be long, slow strokes, and short putts shouldn't be quick, jabby strokes. Think in terms of both long and short putts (and all putts in between) as being on the same metronome. A short stroke putts at a smooth 1-second-to-1-second rhythm, and a longer putt is maybe a 2-second-to-2-second rhythm. You don't want to be 2-seconds to 1, or 1-second to 2 for any putt. The key is to maintain a similar stroke speed for all your putts, and simply adjust your seconds as needed, based on the length of the putt. Just be sure to stay consistent and keep the backswing and forwardswing even! Use a stopwatch and dial in your rhythm, and stick to it with all your putts. Another common flaw I see from students who struggle with their putting is their tendency to lift the putter with their arms, as opposed to developing a rocking motion of the shoulders. When you lift, you lose a sense of your putting arc, which then leads to a host of problems that, no doubt, result in more bad putts.

A great way to develop a rocking motion of the shoulders, as opposed to a lifting one, is to practice a few strokes with the hands down on the shaft. If you can manage to keep the putter grip in the center of your stomach and not touching your arms, you'll quickly get a feel for making a putting stroke without the need to lift and pull up on the putterhead. Give it at least 10 practice strokes. Then come time to make a real putt, remember what the drill felt like and groove the rocking, not lifting, motion into your putting stroke.

I'm a big believer that the most repeatable stroke is one that travels on a simple arc, from inside the target line to back inside the line. If you try to putt square-to-square, you'll see that it requires a lot of manipulation of the hands–which, by the way, is far from natural, considering we stand to the side of the ball and putt from an angle, not from directly above the ball.

Here's a great drill to practice grooving a solid, inside-to-inside stroke. Take a club, and position the grip end on a straight line at the target (using a flat putt). Then with some tees, trace a backswing that curves inside that target line. Now go ahead and start rolling some putts, using the club as a guide for your target line and the tees to help guide you along an inside-to-inside arc. As the putter passes through and makes contact, it's perfectly all right to allow the putterhead to release and close through the putt. And by close, I mean the putterhead remains square to the arc but closed relative to the target line. If you do this, you'll soon get a feel for a very natural putting arc.

Now that you're putting is refreshed and back in shape, don't neglect the common chip shot that on some days, occurs more often than long putts do.

In this case, I have a simple chip from just off the green and I want the golf ball to fly at a medium height and roll a few feet forward toward the hole. To hit this shot, I place the ball in the back of my stance, just off the inside of my right toe. Now, here's where I work some of my putting fundamentals into my chipping. Like a good putt, chipping requires you to keep the hands in as constant a position as possible to help produce predictable results. For this shot, I concentrate on keeping my hands ahead of the clubhead at all times, which like a putt, will help me to make solid impact time and time again. As with putting, I like to think of both hands working together and evenly through the stroke, so if you want to practice a few one-armed chips while holding a flat left wrist and a cocked right wrist as you swing, go right ahead. It's a great way to get a feel for the individual roles the hands play as they coordinate together into one motion. 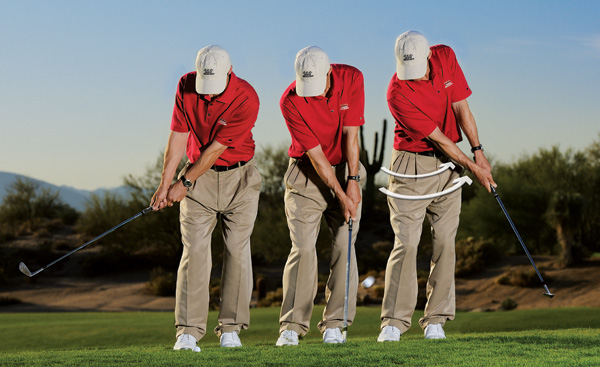 Unlike with putting however, my hips will have more rotation through the shot. That's understandable, considering how much longer the club is and the strength I need to get the ball up onto the green. But other than that, my chipping stroke is a lot like my putting stroke. Practice the one-armed drills and get used to putting your chips as I'm doing here. You'll quickly see that improving your chips will lead to shorter putts, which with these fundamentals, you'll be making a lot more of.

Dale Abraham is the director of instruction at Desert Mountain in Scottsdale, Ariz. For more information, visit desertmountain.com.