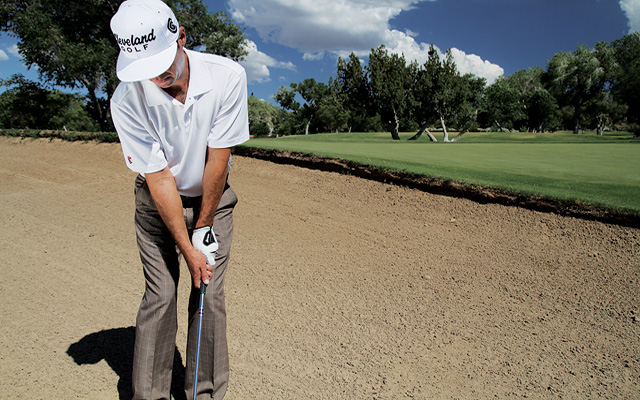 Grip it right!
HOW YOU GRIP THE CLUB can greatly influence the type of shot you want to hit. Here are two grip positions. The circled grip is my standard hands position, and the cutout photo below shows a faster hands position.

Faster you ask? Allow me to explain. Typically, when we see a grip like the one below, we think of it as a weak grip, since the hands are situated to release sooner and, in terms of full swings, produce weaker shots. In the sand, a weak grip actually can help you hit the ball higher and make the ball stop faster. Just remember, weak only applies to the early release of the wrist hinge, not actual grip pressure. Be sure, no matter what type of hand position you choose, you grip the club with enough tension so the wedge doesn’t slip in your hands as you make contact with the sand. Experiment and see what works best for you.

BUNKER SHOTS can be awfully counter-intuitive. Seems the more you aim left, the more your shots fly to the right. In reality, that’s how things are supposed to work, but it’s not impossible to hit straight shots. The key is in managing your angles. To keep it simple, consider that for every degree open you rotate your stance, match it with an open clubface. As you do that, situate the target right in between the two angles. From here, be sure to swing along your stance and not right at the target! You’ll soon see that your sand shots will fly better.

Plant Yourself
NO MATTER WHAT TYPE of sand shot you intend to hit, always make sure you have a steady footing. If you slip and slide through the shot, no doubt you’ll have a difficult time hitting the kind of shots you want to hit. Plant your feet into the sand just enough so they stay secured through the shot.

Continue practicing this drill until the ball rolls and the line doesn’t wobble from side to side. If you can consistently do that, then you’ve found a stroke that’ll stay on the line you’ve intended.

BEFORE YOU STROKE your putt, take a Sharpie and mark a line on your ball with the Line-M-up tool (finetunegolf.com). That’ll help you align your ball exactly where you want it to go.

SET UP FOR IMPACT

THE SETUP AND IMPACT POSITIONS may look similar, but they’re actually quite different. At setup, the body should look poised to make a hit, with your weight centered, the club hovering above the sand, and the shaft vertical to the ground.

At impact, there are three main differences. First, my weight has transferred to my forward leg. You can’t hit great sand shots off your back leg! Second, the shaft is leaning toward the target. This is a must for consistency. In fact, it’s the loft of the wedge that’ll lift the ball, not a lack of shaft lean. And third, because I need to hit down and into the sand, my knees are flexed more at impact than they were at address. If you can concentrate on making these three differences at impact, you’ll see that hitting sand shots is a lot easier.

Watch It!
One of the best ways to make a full swing, inside a bunker or out, is to allow the head to rotate through the shot. By doing so, you’ll swing more freely and without any restrictions. As far as watching the golf ball, go ahead! Just make sure you stay in position as you swing through the shot.

Why you ask? The main reason is that, with a typical bunker shot, you want to hold the clubface open longer than you would a normal shot–meaning, in order to hit the ball straight with an open face, you have to swing along the direction of your feet and body, and not toward the target.

If anything, play your next bunker shot as though you wanted to slice it toward the hole. This will instinctively help you both swing from outside the target line to inside the target line, as well as make it easier to hold the clubface open through the sand shot.
Just remember, a good bunker player doesn’t try to lift the ball from the sand; rather he or she uses the sand to push the ball up, and the clubhead slides through the sand and under the golf ball.

NEED MORE PROOF? Because you swing along your open body line (open relative to the target), you have to keep the clubface open through the shot. It also helps get the ball airborne quickly, as well as imparts more spin for a quicker stop on the green.

That said, how much is too much? Eventually the hands will rotate, and the clubface will close. The key is in maintaining the rotation of your body. The more you rotate through the shot, the easier it is to keep the clubface open through the bunker shot.

Just remember, if your goal is to hit a high bunker shot that stops quickly, the trajectory and bite isn’t going to come from flipping your hands through impact. It’ll come from an aggressive rotation of the body through the shot with the clubface open.

USE SPEED, NOT MUSCLE, TO REACH THE TARGET

DON’T DIG A HOLE IN THE SAND. Really, to hit solid shots out of the sand, the more you try to dig deep and use muscle to excavate the ball, the more likely you’ll find yourself hitting more than one shot from the same bunker.

The key is to think “speed,” not “strength.” By thinking speed, you’ll be more likely to make a more complete swing through the ball, as opposed to hitting down into the sand as you would in a chopping or hitting motion. And when it comes to speed, for that matter, we’re not just talking about the hands. As the previous tip alluded to, good bunker shots require the entire body to get activated and make a rotation.

The bigger the body rotation through the shot, the less the hands have to get involved. The less the hands are involved, the easier it is to hold the clubhead open through the shot and the better your bunker shots will be! So think speed, not strength. You’ll find that type of mentality will help prevent you from stabbing into the sand and instead swing right through it.

IN THE SEQUENCE ABOVE, check out my feet. Notice anything unusual? If you notice my back foot (my right foot), it stays flat-footed through the swing. I do this because first, by keeping a stable footing, I lessen the risk of slipping or sliding through the shot. Second, the more rigid my lower body is, the faster my upper body will rotate across the ball.

Try this technique the next time you’re practicing your bunker shots. Allow your weight to shift as it naturally would; just do it with both feet on the ground. I’ll bet you’ll pick up some upper-body speed in no time.

UNDERSTAND HOW THE WEDGE WORKS

JUST ABOUT EVERY WEDGE YOU CAN BUY can be played at least two different ways. You can tell by looking at the wedge’s sole. Along the center of the sole, if you’re going from heel to toe, you’ll see a bevel in the contour. This is what’s referred to as the wedge’s bounce angle. The greater the bevel in the sole, the higher the bounce angle, meaning the wedge becomes less diggy and actually more prone to bounce off the sand. The less bevel, the lower the bounce angle. This will make the club dig more easily into the sand.

The wedge’s bounce angle can be amplified just by opening the clubface. When you do that, the leading edge lifts up, and the sole minimizes digging and lifts the ball up in a hurry. The opposite effect would be to play the wedge square. This brings the leading edge way down toward the sand. It’ll want to dig into the sand like a knife and won’t want to bounce as an open-faced shot would.

SWING WITH THE SLOPE

MATCH THE SLOPE FOR BETTER BUNKER SHOTS. The best way to play a bunker shot on a slope is to match your swing to the slope as best you can. To do this, you’ll have to manipulate your weight and body position. In the case of the photo here, the ball was sitting on an incline toward my target. That meant I had to align my shoulders parallel to the slope, and situate my body as perpen-dicular to the slope as I could by placing my weight more toward my back foot. This meant I had to work harder at making a weight shift toward my forward leg. As for the rest of the details, everything was played just as though I were on flat ground. The key with this shot, and with all bunker shots, is to make things as simple as possible.