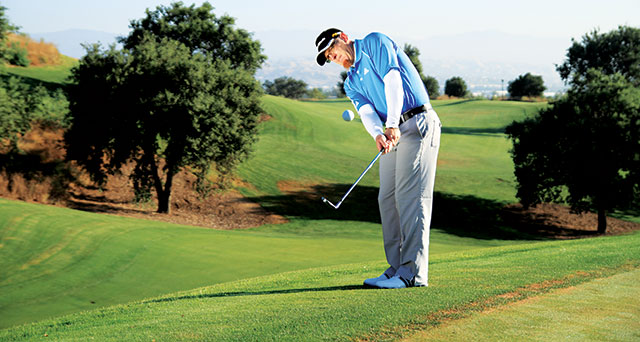 Old School
The best way to chip the golf ball isn't the way you might have been taught. In fact, chipping is arguably the most misunderstood aspect of scoring, mainly because there are countless ways to get the job done. Many golfers tend to follow a series of mechanics that have been taught through the years, starting with an extreme forward press of the hands (see photo above). If you do this, not only do you run the risk of stubbing the wedge into the turf, but it also makes solid contact harder to achieve.

New School
The right way to chip is, in my opinion, also the easiest. Start by addressing the ball in a more neutral position, with the shaft still leaning toward the target, albeit less than before. A good rule of thumb is to address the hands slightly in front of the ball. As for proper ball position, play the ball in the back center of your stance.

By addressing the ball in a more neutral state, you're allowing for a more natural, less-forced motion through the shot. To take it even further, consider how the clubhead rests on the ground. The trick is to avoid as much surface-area con-tact through the shot as possible. Lifting the heel slightly off the ground will help the wedge to glide through the shot with less chance of grass or debris getting in the way of the shot.

Distance Check
How far you stand from the golf ball also makes a big difference in your ability to hit good pitch and chip shots. And, like putting, getting the right direction is best attained by situating your eyes just inside the golf ball. This will help you better see the direction in which you want the ball to go, as well as help improve your posture so it becomes easier to rotate the club back and through the shot. Also, if you're going to err one way or the other, err with the ball too far from rather than too close to you. If you get too close, you can't swing freely through the ball.

Closed Face
Another misconception about good chipping is the one about keeping the clubface facing the target as much as possible. At impact, yes, you obviously do want the clubface facing the target. But on the backswing, a closed clubface will only lead to awkward positions at impact. From this position, I'll have to excessively rotate my body to make up for a clubface that's already too closed at impact, i.e., I'll pull it.

Another problem with this position is the stress it puts on my hands. Because the clubface is closed, I can't fully rotate the hands. If I try, I'll end up hitting down too steeply onto the golf ball. Which as you might guess, makes it impossible to hit consistent chip shots. A fat, stubbed or thinned shot is just a matter of time.

Experiment with a couple waist-high practice swings. As you rotate back and through, keep the clubface angle square to your body. As you do so, you'll see the clubface open and close relative to the target line.

If you stay square, you'll not only hit straighter shots, but also find it's easier to correct bad alignment in a hurry.

Rotate The Body
You can't hit good pitches and chips by trying to push the ball toward the hole! Let your body rotate, just as it does with any regular swing. The biggest difference isn't so much that the swing is smaller; rather with delicate pitches and chips, your body weight ought not to shift laterally as much it does with a full swing. Instead, allow your body to rotate; just be sure to keep excess weight shift to a minimum. Stay centered over the ball from start to finish.

More Contact
At the moment of truth when hitting shorter shots, how you come into contact with the ground is more critical than it is with full iron shots. With full iron shots, you take divots on the target side of the ball. With chips, instead of taking divots, you actually glide across the turf. Plus you swing a lot slower, and how you make contact with the green stuff then is even more important. In the case of the photo to the left, it looks as though I've hit a decent shot, but notice how low into the grass the leading edge of the wedge is. I actually stubbed this shot, and both the ballflight and spin rate of my ball were lower than I had wanted.

Less Contact
With less friction comes less deceleration through the shot. Not only does this help add a little more backspin, but avoiding too much surface contact also prevents me from opening or closing the clubface at impact, two things that send the ball off the intended line.

If you have a depressed lie, then more surface contact is necessary to hit the ball. With ordinary lies, brush across the top of the grass and let the wedge's grooves and lofts do the work for you in getting the ball up and airborne.

If i had selected the right wedge, then maybe I wouldn't have totally whiffed this shot! Many amateurs think that the closer they get to the hole, the higher-lofted wedge they ought to use. Well, this case proves that theory wrong. I'm actually on a downhill/sidehill just off the green. I played the shot correctly, with my shoulders aligned to the slope and the ball in the right position. Heck, I even made a good swing. The problem? My 60-degree had too much loft, and I slid right underneath the golf ball.

Hold The Face Open To Lob It
A good lob shot means hitting through the golf ball with an open face so the ball flies up and stops in a hurry. To hit this shot, you have to be able to go against conventional wisdom and make a swing while holding the clubface open as long as possible through the shot. To do this, you have to master the art of swinging outside-in–that is, from outside the target line to back inside the target line on the forwardswing. If you can master that, holding the face open will be a lot easier to do.

Activate The Lower Body
Although much has been said about how the upper body should perform, it's just as important to know how the lower body should work during the swing. My advice? Let the lower body get active in the swing. Don't restrict your motion. That isn't the same as adding excessive lower-body motion; rather, as your body rotates, so too does your lower body. With the pitch shot I'm hitting here, notice how my right knee is rotated in through the shot, and my hips are opened as I finish the swing. For chip shots, you'll rotate less, but the point is to allow your lower body the necessary motion to make sure the clubhead is square to your upper body and you can swing freely without any forced restrictions. Do that and you'll see how being comfortable over your short shots is key to helping you hit better shots from around the green.

Execute Effectively
You may know how to play a variety of golf shots, but knowing when to play what is just as important. And in case you were wondering, the way Phil Mickelson hits high and short lob shots probably isn't the way you should do it. In other words, this means playing lower shots whenever possible. Why? Simple–lower shots have forward momentum and are more likely to reach the hole than a high, finesse shot is. With a lower shot, you need to factor distance and direction, whereas, a higher shot requires you to assess trajectory, spin, distance and direction. So when you can, hit the lower shot and use the contours of the course to your advantage. You'll save par more often.

n Brady Riggs, PGA, is one of the most sought-after instructors in Southern California. To learn more, or to book a golf lesson, visit bradyriggs.com.

One thought on “Save More Pars”