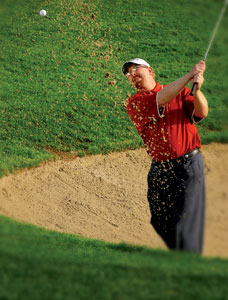 Like any aspect of the game, improving your bunker play takes practice. But practicing the wrong technique will do little but further ingrain whatever mistakes you're already making. As a result, instead of getting better, you'll probably just get worse. The good news is, the fundamentals of solid sand play are actually pretty simple, and can be learned quickly provided you take the time to make certain your setup and execution are correct.

The key to becoming confident in the sand is to make your goals realistic. Pulling off miracle shots that stop within gimme range takes a tremendous amount of talent and expertise. Don't get greedy trying to get the ball close to the pin every time, at least initially. Start by learning to get the ball on the green consistently, with a chance to make a par-saving putt.

Setup
To assume the proper position at address, be certain the ball is located toward the front of your stance, near the left heel. The face of the club should be open slightly, depending on the depth of the bunker. The more height you want on the shot, the more open the clubface must be. Position your feet fairly wide apart to promote balance, and point them to the left of the target with at least 75% of your body weight on the front foot.

Finally, grip down slightly on the shaft for enhanced clubhead control, and work your feet into the sand until you feel your footing is stable and secure.

_ÊBackswing
For the best results, take the club up quickly in the backswing, which will promote a steep angle of attack. A wide stance with the majority of weight on the front foot and a swing with minimal rotation will promote this type of backswing. Be certain to take the club up to the top with your arms, not by cocking your wrists or turning your body. The length of the swing should always be relatively full, even on short shots.

_ÊImpact
At impact, your weight should move even farther toward the front foot while your knees continue to remain flexed. Contrary to what most recreational golfers believe, the club shouldn't strike the ball from an outside-in swing path, but should instead come straight down the target line and then move left immediately after impact. The clubhead should enter the sand approximately two inches behind the ball and should pass through the sand on a flat trajectory. This will displace enough sand to throw the ball out of the bunker and onto the green. Any attempt to scoop the ball out of the sand will most likely result in a poor shot.

Finish_Ê
The length of the followthrough should be shorter than a full shot due to the lack of body rotation and the lack of release of the club through impact. The clubface should remain fairly open into the finish to allow the ball to come out softly and on the intended target line. Your arms should stay close to your body, with the speed of the swing, not its length, determining the distance the shot travels. 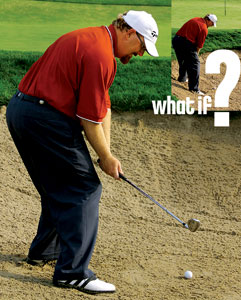 ...you have a downhill lie?
The key to playing a downhill sand shot is to set up with the ball in the middle of your stance, with your shoulders angled evenly with the slope of the bunker. Choke down a bit on the club to accommodate the location of the ball and the steepness of the slope. Expect the ball to come out lower than normal with plenty of spin, and aim accordingly.

...the ball is in a buried lie?
Set up with the ball in the middle of your stance with the clubface square or even a bit closed (the worse the lie, the more closed the clubface should be). You need to swing hard at this shot to make sure it gets out of the sand. Keep in mind that this type of shot will come out with very little spin, and the ball will roll quite a bit when it hits the green.