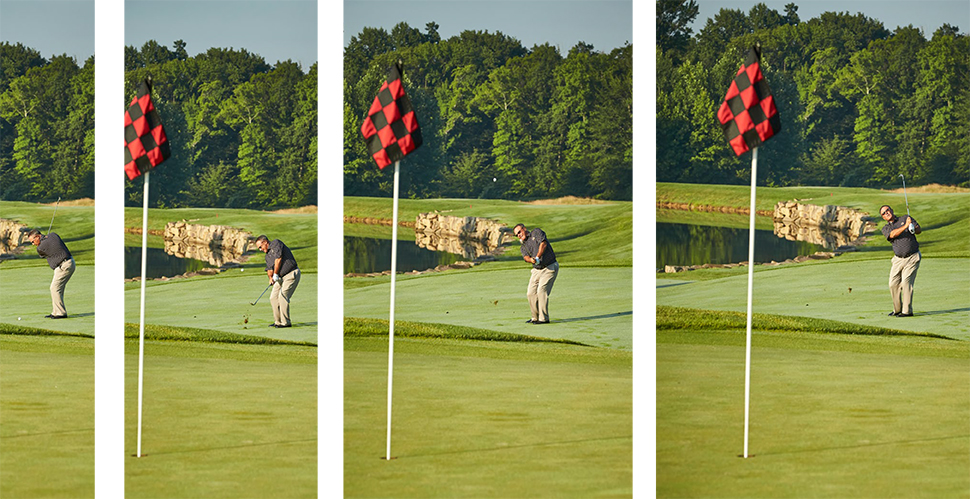 I have been blessed throughout my journey to pick the brains of so many great teachers as well as many great players of both my generation and the present one. While not always agreeing upon “how to skin the cat,” each lent a wealth of knowledge. At the end of the day, what I most learned was there are in fact many ways to get “it” done. Take golf wedge play, for instance: I believe I’ve earned a high degree in that part of the game.

One of my favorite shots to hit is, in fact, far-reaching in the ways you can pull it off. I love wedge play. I guess it’s the way I have been led in my development, both as a teacher of this creative aspect of golf as well as a player of shots that are so much fun to hit. I have had several expert influences in this area and I must recognize them strictly because nothing in this article is my original thought but a shared influence of several great short game minds. Thank you Bob Vokey, John Elliott, Tom Kite, Craig Shankland and, of course, my dear friend whom I miss very much, Seve Ballesteros.

Seve had a magical way of hitting so many miraculous shots around the putting surface, from what seemed like absolute jail to kick-in range. John Elliott, the great and highly underrated instructor from Ocala, Florida, first explained to me that the leading edge (he called it the “digger,” Photo 1) and the commonly referred to “bounce “or “sole” (he called it the “skidder,” Photo 2) must be under-stood before you can become a great wedge player. Craig Shankland, the ultra-talented coach now located in Daytona Beach, echoed many similar points.

We have all experienced the dreaded chunk. We play it back in our stance, hands forward and club face squared up. Well, of course, then the digger will dig. Conversely, using the bounce/skidder properly, along with several other more neutral set-up conditions around the putting surface, will allow you to execute dreamlike results.

John and the others mentioned above explain that two aspirin are not the whole bottle in reference to things like ball position, weight forward and hands forward. In fact, because of Elliott, Seve, and Vokey I’m much more neutral with my ball position and weight distribution. Along with these set-up conditions, and with the exception of a ball in deep greenside rough (Photo 3) or a ball in a buried lie in a bunker, I ALWAYS lay the club open (Photo 4), allowing the skidder to rest against the turf and keeping other aspects of my set-up very neutral. I’m now in a classic anti-DIG position.

GRIP IT TO WIN 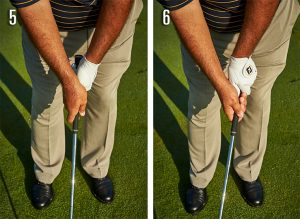 If I want to hit the highest softest shot possible to a tight pin — perhaps behind a bunker — in addition to a neutral set-up and the employment of the skidder I might also weaken the grip, or dial both hands more left on the shaft if you’re a right-handed player, as I’m doing in Photo 5 (Photo 6 shows a “normal” grip position employed for most other shots). Seve was the master of the face/skidder and weak grip combination to hit the softest, most beautiful pitch shots that landed like a butterfly with sore feet.

STAY OUT OF THE HOOD

You’ll rarely see square or hooded club faces with highly skilled players, again unless their ball is buried in deep greenside rough or in a bunker “fried egg.” They understand that the bounce (skidder) of the club is there as a friend. I remember telling Bob Vokey that I have always wished they (whoever “they” is) had never called the sole of the club the bounce, adding that had it been called the skidder from the beginning (thank you, Gene Sarazen) the average player today would be five shots to the good. Bob smiled and agreed. The recreational player who doesn’t understand or has never been coached correctly hasn’t a clue nor the confidence to lay a wedge open and properly apply pressure against the turf with the skidder without any hint of a dig.

Use the images in this article, along with the messages from my mentors, to go out to your local short game area and EXPERIMENT. Be creative. Play with combinations of weight distribution, ball position, face/skidder conditions at address, and your grip placement. You’ll have a blast. Enjoy.

If I can be any further help or answer any questions please feel free to email me at tpatri@mindspring.com or visit me at www.tompatri.com.