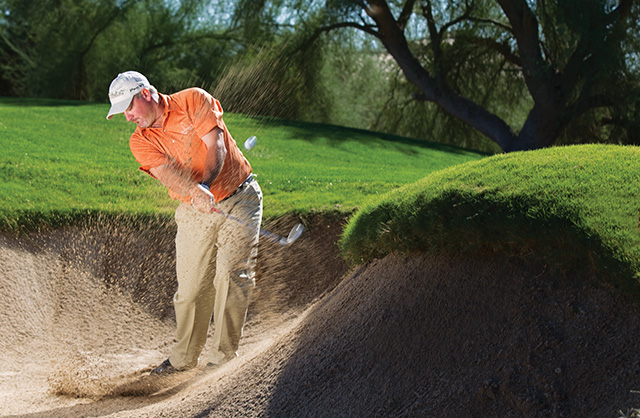 1. BURIED IN THE BEACH
While a buried bunker lie might be a bad break, it’s certainly not impossible to get it up and down from here. But you need to blast it out onto the green and factor in how it’ll behave after it lands.

As you can see in these photos, I have to adjust my setup and swing to ensure that my club enters the sand with a steep descending blow. This angle of attack ensures that my club will dig deep enough for the ball to blast out.

However before I go into greater detail about that, it’s important to set up to the ball correctly. First, don’t open your clubface at address. Keep it square instead. While this might seem counterintuitive, it’s correct, because otherwise, you’ll be descending so steeply (and deeply) into the sand that the clubface will actually dig a hole and pop the ball out, then open at impact. If I hit this shot with a typical open clubface and swing steeply into the sand, the face would shut, and I’d smother the ball. (The bounce would be exposed and not dig enough into the sand in order to get the ball out.) As a result, it wouldn’t go anywhere.

Next, notice the difference between a typical, flatter backswing plane and the more vertical one I use here. Swinging steeply ensures that the club descends severely so that my club knifes into the sand. A flat entry will result in either a bladed shot or one that doesn’t take enough sand and leaves the ball in the bunker. I suggest practicing both these moves–the square clubface and the steep downswing–before putting them into play.

Finally, and most importantly, you must prepare yourself for how the ball will behave once it hits the green, that is, without much spin so that it releases and rolls quite a long distance. If you’re short-sided, it’ll be tough–virtually impossible–to stop the ball near the flag. However if the flag is farther away, then you can let it run out. It’s a tough break, but sometimes you have to take your medicine and not let it affect you. The goal here is to get the ball out of this lie and onto the green, and bounce back on the next hole.

2. POWER HOOK.
New urethane-covered golf balls can really put spin on your wedge shots. But what if you don’t always want a ton of spin? What if you actually want the ball to run out? If you find yourself just off the green in short grass–either the fairway or rough–and you want to take some spin off your shot, then it’s time to play the power hook chip.

Here’s how to do it: Place the ball forward in your stance and pull your right foot back. This encourages an inside-to-out swing path and makes you release the head of the club as if you were hooking the ball. This naturally puts right-to-left spin on the ball, not cut spin. Watch it roll!

3. THE LOW SHOT
To keep your sand wedge chip shot relatively low, you need to first alter your setup. As you can see here, I’m standing closer to the ball than normal. This helps keep the shaft forward, which delofts the golf club through impact. (I must remember to have a little pivot on this shot or I’m apt to stick the club into the ground. And that leads to chunky shots.) Note that I’m also leaning the club shaft forward, toward the target. This delofts the club even more, which will turn my 56_¡ wedge into a lower-lofted one that’s easier to control.

This is really a simple shot because of the lack of moving parts going on, unlike that of a pitch shot or full swing. All that I’m trying to do is get the club moving up the target line with enough height so that when I come down to the ball, I’m making a descending blow. It’s critical to remember that there’s a small pivot in these shots. The pivot helps take away your flippy wrists and also gives you a little power so your swing can stay shorter on the followthrough. That’ll help you get rid of those nasty, penalty-causing double-hit chips!

4. THE LONG ROUGH CHOP
To escape gnarly rough and get your ball safely onto the green, you sometimes have to take a big chop at the ball. And to do that, you need to learn how to use your sand wedge’s bounce.

Open your clubface wide so the back edge or bounce is on the ground. This helps prevent the club from digging into the ground after your steep descending swing. From there, firm up your grip and make a steep swing so that your club shaft is nearly vertical to the ground. A swing that’s too flat won’t be able to cut through the grass. Also, without a firm grip, your clubface will get caught in the grass and turn over. This leads to low, left shots rather than higher, softer ones. In particular, keep your left hand firm so the clubface stays exactly how you want it.

5. BLADED WEDGE
If your ball comes to rest against the collar of the greenside rough, it can make for a really tricky chip. It’s hard to make solid contact, so the best thing to do is to actually blade it with the leading edge of your sand wedge. To pull this off, place the ball forward in your stance, just opposite your left heel. Moving it ahead in your stance ensures that your club won’t be descending and hitting down on the ball, but rather ascending and making contact at the ball’s equator or just above it. This generates topspin so the ball rolls smoothly, like a putt, and onto the green.

In addition to forward ball placement, grip your sand wedge like your putter and make a pendulum-like putting motion with your arms and shoulders. Hover the club just above the grass so you don’t dig down into the turf and let the head sweep through the shot. Definitely practice this one a few times before you try it on the course so you know how the ball will come out.

Jeff Yurkiewicz, PGA, is the head golf instructor at the Grayhawk Learning Center in Scottsdale, Ariz. To learn more and to book a lesson, visit grayhawkgolf.com.