The fastest way to lower your scores is to hone your game from 100 yards in. Yet few people spend the time practicing this area. It might seem like a drag, but it isn’t. It’s the area where you can let your imagination run wild.

I believe the creativity and imagination you need to score well from around the green starts with golf’s fundamentals: grip, posture, clubface aim and alignment. Take your typical pitch shot. By simply tweaking your setup, your shot’s shape will be altered. This makes it easier to hit shots with different trajectories, spins and velocities. And figuring out those ingredients is vital to getting the ball close or into the cup.

After reading through my 15 tips, practice them in a variety of situations, either at your club’s practice green, at a local par-3 course or during a twilight round when you can hit a couple balls and practice a variety of shots. Hit from awkward stances, good and bad lies and different scenarios like having to spin a low pitch shot so it bites enough to stay on the green. I promise, the time you put in around and on the green will pay dividends.

PUTTING
1. Green Reading. Architects design greens so water can easily drain off them. Otherwise, water will accumulate, stagnate and generate disease. Another reason architects want to move water away from bunkers is that they don’t want them to fill up with puddles. While greens slope away from sand bunkers, they drain into most grass bunkers. Keep both of these design characteristics in mind the next time you play. Even though it might appear that your ball will slope toward sand bunkers, it never will.

FAST FACT!
A golf cup’s diameter is 4.25 inches. Its size came about by chance when two golfers at St. Andrews inserted a discarded drain pipe into a worn-out hole.

2. Build Your Alignment From The Ground Up.
After you’ve read your putt and determined what line you want to start the ball on, place your feet together and aim them down that line. It’s easier to see your target line from this position. This eventually helps you get your stance square to your target line.

3. Keep Your Hips And Shoulders Parallel.
Whether you’re on the green or in the bunker, your hips and shoulders must be parallel when you address the ball. Research that I’ve done at Dr. Frank Jobe’s Biomechanics Lab at Centinela Hospital in Los Angeles shows that your putter tracks your hip line in the followthrough nearly 90% of the time. If your hips are open or closed, your putter will more than likely mirror that path and travel on either an inside-out or outside-in path. It’s imperative that your hips and shoulders are parallel to your target line; otherwise you’ll pull and push putts all day.

4. Speed Drill.
Notice how my legs are crossed and that I’m using a cross-handed grip? I don’t normally putt this way, but that’s okay because I’m looking with precise focus at the tee, just beyond the cup. By focusing intently at my target, I’ll find my speed–not necessarily the correct line, but the proper speed. Practice this drill with a tee beyond the cup (so you hit your putt with enough oomph) and you’ll never leave one short again.

BUNKER PLAY
5. Grip For Short Bunker Shots.
When you have a short bunker shot, point the butt end of your club at your belt buckle. To do this, first change your grip so that it’s more similar to how you’d hold your putter (where your grip is more in the palms of your hands). The clubhead should be slightly ahead of your hands. When you swing the club back, quickly hinge your wrists, setting the clubhead behind your hands. This will create a steeper angle of attack into the ball and help pop the ball up. As with all bunker shots, keep the clubface open to your shoulder and hip line.

6. Grip For Long Bunker Shots.
When you have a longer bunker shot, use your regular grip and address the ball so your hips and shoulders are open to your target line (but not as open as they are on a short bunker shot). Aim the clubface at your target so that it’s slightly open to your shoulder and hip line.

Because this is a longer bunker shot, allow your shoulders to rotate up to 90 degrees to your hip line in your backswing. Your swing naturally won’t be as steep because your hands are in front of your belt buckle. (When your hands are ahead of the clubhead, your grip is neutral and, hence, your swing plane will be shallower.)

7. Swing Along Your Shoulder Line, Not Your Target Line.
When you play a bunker shot, you should swing along your shoulder line, not down your target line. This helps deliver an open clubface into the ball. As your swing path travels down your shoulder and hip line, the ball will pop out of the sand on your aim line.

FAST FACT!
Gene Sarazen is credited with inventing the sand wedge in 1935. He flattened the spoon golf club’s face and added a leading edge to help it slice through the sand.

8. Finish Your Swing.
Most players worry too much about getting the ball out of the bunker. Focusing on this makes them finish at the ball. As a result, the club gets stuck in the sand, and the ball stays in the bunker. If you concentrate on finishing your swing, however, it’ll help you get your ball out of the bunker. Have a clear image of your target and accelerate through the ball and finish your swing. You won’t leave another ball in the beach.

CHIPPING
9. Set Your Hands Ahead Of The Club.
At impact, the hands must be even with or ahead of the ball with every shot. A simple way to ensure this happens when you chip is to follow this easy two-step drill:

First, place the clubhead in front of the ball, then cock your wrists back without moving your arms. That sets the clubhead behind the ball, but keeps your hands ahead. When you swing, use your shoulders to control the club. Simply turn them so your arms and hands stay connected with your body and the clubhead returns to its same position at address.

10. Fluffy Lie.
When your ball is sitting up in the grass, the goal is to pick it off the top. Although you can use any club you want, I suggest you hit either an 8- or 9-iron. (Hitting a sand or pitching wedge increases the chances that the club’s toe will rotate in. Ultimately which club you use depends on how long your shot is.)

Hold the club as you would a putter because a regular grip tends to dig the toe in the ground, and a putter grip will produce a softer shot. Point the club’s butt end at your belt buckle and stand about the same distance away as you would a putt. Keep your shoulders level and make a putting stroke using your larger muscles. It’s really that simple.

11. Down Lie.
When grass gets between your ball and the clubhead, it slows down your clubhead and produces a shot with little, if any, spin. This not only makes it harder to finish your swing, but also makes the ball fly farther than usual (and harder to control).

To combat these so-called flier lies, make a steeper swing so you leave the club on the ground to make it pop out. To do this, hinge your wrists steeply in the backswing and come back down steeply. Turn your shoulders slightly, and simply return the club to the ground. 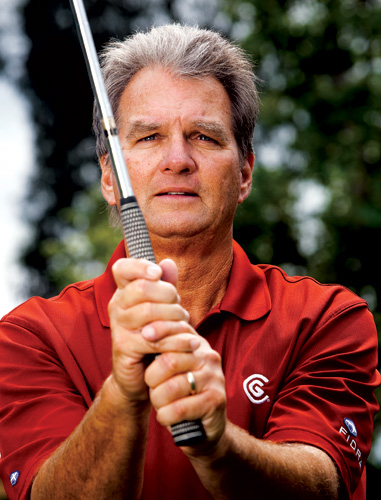 PITCHING
12. Visualize Your Shot Before You Swing.
When you visualize an action (hitting a golf shot, driving a car, etc.), you use up to 80% of your brain’s neural structures that you use to perform the rehearsed action or behavior. Consider that Jack Nicklaus first visualized his ballflight, then the swing that would produce that flight. I want my students to do the same.

Too often, golfers think of what they should not do (don’t chunk it, don’t slice it) when they should really think about what to do (draw it hit it at the pin). Unfortunately our brains don’t discriminate between do and don’t; they just recognize the images of what we say.

The next time you play, whether you’re pitching or hitting a tee shot, work on visualizing your shot. Pick very specific targets (the corner of the flag, a leaf in the distance) and imagine the shot you want to hit toward that intended target.

13. Target And Ball Position Determine Trajectory.
Where you place the ball in your stance changes your club’s loft at impact and your shot’s trajectory. The farther back you play the ball, the less loft your club has and the lower the ballflight will be (hands moved ahead of the ball subtracts loft from the club). Similarly if your hands are even with your belt buckle, you’ll add loft to the club and hit it higher. Don’t get too cute. Just change your ball position to control your trajectory on pitch shots. It’s the easiest way to mix up your shot selection.

14. Abbreviate Your Finish For More Spin.
To add more spin to your pitch shots, drive down and through the ball and hang on when you finish, releasing more of your body and less of your hands. Make an abbreviated backswing, and then as you swing down, retain the angle between your left wrist and the clubshaft. This increase in lag (the club and your forearm should form the letter L) helps you load power in the full swing.

You should abbreviate your finish also so that your followthrough is the mirror image of your backswing L shape. This ensures that you’ll pinch the ball and get more spin. Play the ball farther back in your stance to get more spin, too.

15. How Your Wedges
Dictate Shot Type. Like your putter, wedges are your scoring instruments. They’re designed to get the ball close to the cup. But they come in a wide range of lofts, from 48_¡ to 64_¡. Many Tour pros carry four wedges with them. A key thing to keep in mind is that you should leave a maximum of four degrees between each wedge. If I carry a 56_¡ and my next lowest wedge is a 50_¡, the gap is too big between my clubs.