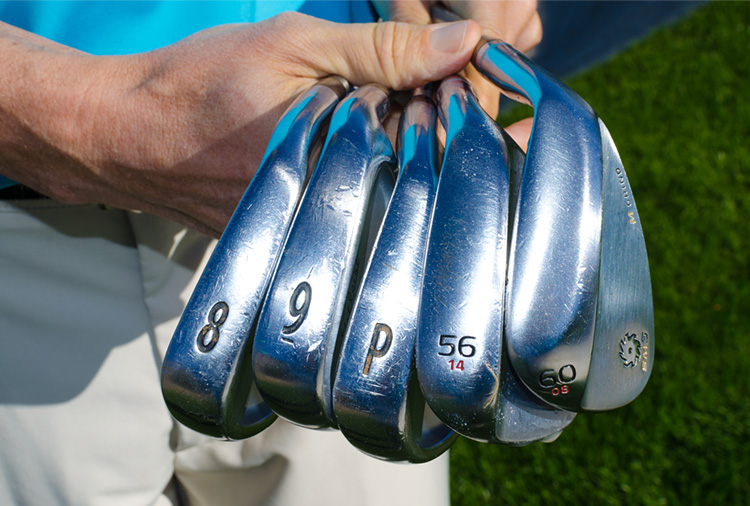 If I accidentally hit a little too close to the ball, say one inch behind, the ball will fly further but spin more and stop quickly, still giving me an acceptable shot. If I’m not using enough club, I would have to hit one inch or even a half-inch behind the ball, and if I hit a little too close to it, I would hit the ball first — causing it to go flying over the green and into whatever trouble is lurking on the other side. Not good.

Some of you may be thinking or worrying about how using a less-lofted club might not clear the lip of the bunker. Don’t. Your pitching wedge, 9 and 8 iron have less bounce than a standard sand or lob wedge. A typical pitching wedge will only have six to eight degrees of bounce while an 8 or 9 iron may only have four to six degrees of bounce. This is important because you have to open the face more at address with a club that has less bounce (Photo 3). Opening the face also adds loft and will get the ball over the lip of the bunker. Give it some practice and you will see that it makes one of the hardest shots in golf a lot easier.

GET OUT EVERY TIME WITH THE ‘SURE-OUT’ METHOD

Do you struggle with inconsistent bunker play? Try the sure out method for more reliable results. This greenside bunker method keeps your swing radius constant and the bottom of the swing in the right arc in the right place, 2” behind the ball. From soft sand set up as follows:

Stance about hip to shoulder width apart and your weight just slightly favoring your left side, 55-60%. (Photo 4)

Play the ball just left of center (toward the target) with the clubface slightly open (right of target). (Photo 5)

Without using your wrists and adding any arm swing to the motion, focus on turning your belly button back away from the target and then back through toward the target (Photo 6).

You should finish with your belly button facing the target and your weight and upper torso over your left leg (Photo 7).

Once you get the hang of hitting greenside bunker shots this way, you can eventually allow the wrists to hinge and help hit the ball higher and softer.

>>Drill: Start with the butt end of the grip in your belly button and grip down on the club below the grip (Photo 8).

This drill should give you a good feel of allowing the large muscles of your pelvis and torso to control the shot. Trouble happens when the little muscles of the arms and wrist take over and the big muscles don’t move.