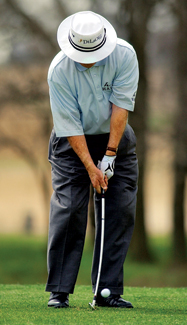 The plethora of multiple wedge offerings is fantastic. They’ve made extinct the old saying a sand wedge is the only wedge a good player needs. That adage came from Greg Norman, who I bet has added a lob wedge to his set since. Nevertheless, despite owning the tools for hitting any number of specific yardages from 125 yards and in, most short shots you’ll face will require something much different than a full swing from one of the two or three wedges in your bag.

Say you have a 45-yard shot to the green. They don’t make a 70-degree utility wedge for that scenario. Instead, you’ll have to choke down and make partial swings with either your pitching wedge, sand wedge, gap wedge or lob wedge. Now, throw a bunker between you and the pin. Your shot options narrow a bit. But do you make a 75-percent swing with your lob wedge or a 50-percent swing with your sand wedge? Confusing, huh? Not only are you torn between two clubs, but you’re also stuck between two swings.

What if I was to tell you that it’s possible to handle any short yardage situation from 85 yards and in with a single swing? Wouldn’t that be nice? Well, that’s certainly a reality. You can create different trajectories and distances from a single swing by simply learning to open and close the face of your sand wedge. Maybe The Shark was right; a sand wedge is the only wedge a good player really needs. The key is to control the face. Here’s how.

First Things First
Most recreational players have a difficult time with short shots when, in fact, those should be the easiest to execute. Wedge shots feature less speed with a shorter shaft and don’t require the turn, coil and weight shift as do full-swing shots. The number-one mistake amateurs make with a short shot is failing to set the club. By that I mean they rush it from the top, using way too much lower body action and creating sudden bursts of power that either destroy contact or make consistently hitting specific distances next to impossible. 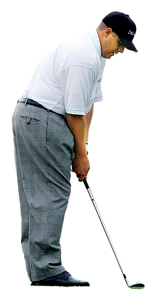 The setup is key. For starters, create an open stance. The short-game swing is too short to effectively transfer weight from the rear foot to the front foot. So, preset it. Flare your front foot open and plant your weight on your left side (for right-handed golfers). Since you’re not looking for power, go ahead and pin your right elbow to your right side–this will help keep your club on plane. As for the takeaway, move the club away with your hands and maintain a steady head. Shoulder high is about as far back you’d want to take your hands.

If you can get to this position, you’re set. From here, the worst thing you can do is panic. With a short swing, many golfers feel they don’t have enough energy stored to hit the ball the desired distance. Trust me, you do. With a wedge shot, centered contact is more important than speed. So, at the top, be patient. Don’t rush the downswing. In fact, during your practice, take the club to the end of the backswing and pause. Then begin your downswing, which, like the backswing, is fueled by the arms and hands. Remember, your lower body and left side are already turned out of the way. If you’d like, focus on moving your hands along the same route they took away from the ball. Once you reach impact, fight the urge to raise the hands into a high finish. I’m sure you’ve heard me say this before, but it bears repeating: In golf, you shake hands like a gentleman; you don’t high-five. In other words, postimpact, extend your right hand as if you were going to shake with a person standing immediately to your left along your target line. See how your right shoulder turns underneath your chin as you do so? That’s a forgotten key that pays big dividends.

Notice how I’ve failed to mention the head. That’s done purposefully, for in a good wedge swing, the head remains back and relatively still and always remains between your two shoulders. If you’re prone to shanking your short shots, the culprit might be your head. In a shank, the club at impact is closer to the ball than it was at address. If you move your head down, your body, arms and shaft will follow. Now, the hosel is in the way. Same goes if you typically strike short shots thinly. This time, your head is moving up. Keep your head steady and allow your right shoulder to move fluidly underneath it. 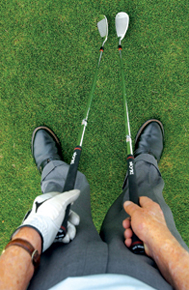 Check The Toe When Squaring The Face
A perfect swing can yield an off-line shot if what you thought was a square face at address was actually open a few degrees. It’s a common phenomenon among the recreational ranks. For foolproof face alignment, check the toe of the club and its relation to the hosel. Simply eyeing the face won’t work.

Learn The Short-Shot Basics
The wedge shot is not a full-swing shot, so it needs special attention at the setup. Since there isn’t enough time in the wedge swing to get your left side out of the way and shift weight to your front foot, set your weight forward at address and adopt a slightly open stance. Now all you need to do is take the club back and through (without rushing or overaccelerating). To guarantee centered contact, hitch your right elbow to your side and keep it there until impact. This is an effective way to keep the club on plane and make clean, crisp contact with the golf ball.

The golf swing is both down and through
In its simplest form, the short shot is simply down and through. Your hands lead the club down to the ball, then the rotation of your rear shoulder under your chin leads it through. At the finish, you should be able to shake hands with an imaginary person on your left, which means the hands remain low.

Open For Business
With a grooved sand wedge swing, you now have all you need to hit a variety of distances and produce varying trajectories. Opening or closing the face at address accomplishes this. For less distance and more loft, rotate the face open. For more distance or to produce a lower trajectory, simply close the face.

When opening or closing the face, never look at the center of the club. Doing so can give you an inaccurate reading of just how far open or closed you’ve rotated the face. Instead, look to the toe. Imagine a line running from your stance line through the hosel. How does that line look at the toe? If it’s left of the toe, then the face is open. If it’s right, then the face is closed.

For both open- and closed-face shots, use the same stance described above. Of course, the more you open the face, the more left of target you should align your feet at address, and vice versa for closed-face shots. Regardless, both shots require a slightly open stance with the majority of weight situated over the front hip and leg.

Flight Control
Let’s imagine a 30-yard shot. If the pin were up, I’d opt to open the face and hit a high shot that drops and stops immediately upon landing. If the pin is back, then I’d close the face and hit a lower shot, planning to land short of the pin and letting the ball run to the hole once it lands. Either way, I make the same swing with only a slight change in backswing length. This seems to be where most recreational players have difficulty. Maybe this bit of advice will help. For the first shot, the 30-yard high-lofter, I take my hands back to my waist. For the lower shot, I stop my backswing at my knees. From these two 30-yard options, I can build backswings to match varying lengths. Say the shot is 60 yards. To hit it high, I open the face and take my hands back to shoulder level; for the low runner, I’ll stop my hands at my waist.

The next time you practice, bring only your sand wedge. Pick a target 30 yards away. Open the face and see how far a backswing you need to land the ball that distance. Now, close the face and see just how much you need to shorten your backswing to hit the same yardage. It’s a perfect way to learn distance control and improve your wedge swing at the same time. In a single practice session, you’ll groove a feel for specific yardages without much effort. 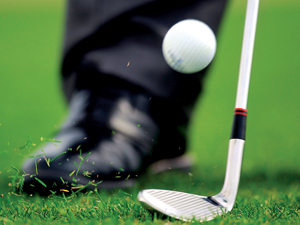 Spin
Many of my students ask how they can add more spin to their wedge shots. Adding spin is key–it affords yet another option from short distances. Typical instruction says that in order to add spin, you must pinch the ball against the turf. That’s true, but in trying to create the pinch, most golfers simply speed up on the downswing, a huge no-no. The first step is to understand how spin is created. Spin results from the ball rolling up the clubface, a phenomenon affected by the size and depth of your grooves. The more the ball rolls up the face, the more it will spin. It makes sense, then, that for more spin, ball contact should be made lower on the face, giving the ball more time to roll up the grooves. Enter scoring lines 2 and 3. For the most spin, create contact near the bottom grooves rather than those in the middle or toward the top. Usually when I offer this advice, students scull the ball. Crucial to this technique is striking the ball with a descending blow. In a good wedge swing, the club moves down and through. If it only moves down, be prepared for a fat shot. If it only moves through, expect to hit your next chip from beyond the other side of the green.

Conclusion
March Madness is over, and the NBA playoffs are in full swing. If you’re like me, you’ve watched a lot of basketball on TV the last few months. I’ve also watched how the good teams rise to the top–with skillful guard play. The guard is the most important position on a basketball team. Guards run the plays and they dictate tempo and control the offensive, passing the ball to the open man and sometimes driving the lane for a layup. Funny, the typical point guard is the smallest member of the team, yet his or her contributions are the biggest. Slam dunks, turnaround jumpers_Ê and alley-oops may garner the most cheers, but they mean nothing without the guard setting the scene.

The same scenario applies to golf: the short game is the least exciting, but it means everything to your game. Big hits are impressive, but if you drive it to 100 yards of the green and can’t do anything with it, well, then you’re not going to advance very far. In my 50-plus years of teaching, I’ve always emphasized the short game. Turning three shots into two will make you a better player than adding 10 yards to your average drive. If you’re already a decent wedge player, great. But if you really want to become a short-game expert, you must learn how to effectively close and open the face to match the situation at hand.