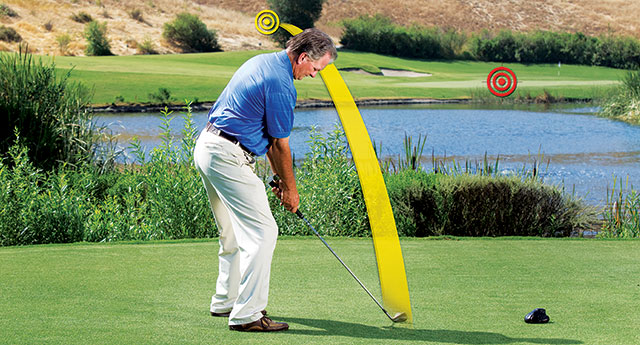 Play It Safe
You might be asking yourself why I'm not aiming at the green on this shot. I'll give you a hint: See all that blue stuff? I don't want my ball to go in it!

With so much water guarding the front of the green, I feel as though it's just too risky for most higher-handicappers to challenge it. (In fact, while we were shooting this tip, a group of golfers played through. Two players dunked their tee shots in the water, and the other two tugged them so far left, they went out of bounds. I can't be sure, but I'd guess the results would not have been the same if only the fairway lay between the ball and the green.)

If you're at all uncomfortable with a visually (and mentally) challenging shot like this, play it safe, as I'm doing here. Take one less club and aim toward safety (in this case, the fairway). After hitting there, I had a relatively easy pitch shot to a wide-open green. I walked away from the hole happy that I didn't lose any unnecessary shots. In situations like this, play it safe, and your scorecard will reflect your wisdom.

TAKE AN EXTRA CLUB
Most amateurs don't hit the ball far enough on their approach shots. Instead of hitting a smooth 5-iron, they typically try to muscle a 6-iron. Unfortunately that usually leads to overswinging and mis-hits, not to mention over-the-top swings that produce the dreaded big slice (if the clubface is square or open) or a pull (if the face is shut).

Consider my situation here. I've got a lot of trouble between me and the flag: a long lake and a kidney-shaped bunker–two places I really don't want my ball to find. So, rather than trying to career my shot, I'm simply going to take one extra club and make a smooth, balanced swing (in this case, a 9-iron instead of a wedge). Good, solid contact will do more to launch my ball the right distance than will tensing up and taking a massively wild swipe at it.

The next time you're in this situation, take one more club, maybe choke down on it and swing smoothly and within yourself.

CHECK THE WIND...THE RIGHT WAY
You've probably seen Tour pros throw grass clippings up in the air to check the wind (see inset photo here). While doing this isn't necessarily wrong, it's only one ingredient to finding how hard the wind is blowing.

Tour pros also check the wind by looking at the surrounding trees. It makes sense. After all, golf balls fly higher than your head height (and the height those grass clippings reach). Sometimes, the wind in the trees blows harder than the grass you toss; other times, it blows softer. Always go with the trees.

Keep an eye on the flag, too. See if it's flapping and how it compares to the wind in its vicinity. If it isn't flapping, that doesn't mean the wind isn't blowing up above it.

CONTROL YOUR SPIN
Check out these two photos. On the left, I'm playing the ball well back in my stance, and my hands are ahead of the ball. This closes the clubface and decreases my club's loft, not only making the ball go lower, but also adding more spin. It's the kind of shot that better players like to hit because it largely decreases headwinds, and with the increased spin, makes it easier to control the ball when it lands on the green.

In the photo at right, I'm playing the ball more forward. This adds loft to the club and allows me to hit the ball higher with less spin. Be careful–with reduced spin, golf balls tend to hop on firm greens, and are more susceptible to the wind, either shortening or lengthening your shot distance, depending on which way it blows.

PLAY THE RIGHT BALL
The fastest (and cheapest) way to improve your game is to play the right ball. Too often, higher- handicappers buy balls that the Tour pros play, when, in reality, they should play a two-piece distance ball.

First, be honest and assess your strengths and weaknesses as a player. Figure out where you need help. Do you need it off the tee or around the green? Both? I bet, if you're a higher-handicapper, you need to increase your distance by a good 10-20 yards and can't consistently control your approach shots and how much spin you generate around the greens. In that case, up your distance so you have a shorter club on your approach shot. Next, buy a sleeve and see how these new balls feel when you putt. If you can add a few yards to your game and feel confident rolling this new rock, then I'd say you've found your ball.

GET OUT OF TROUBLE FIRST
If you find yourself unable to make a risk-free shot, then get out of trouble first. Chances are it'll help you avoid making a big number.

Take a look at the photos on this page. To hit a medium-length sand shot as I'm doing here, take the club away on a slightly more inside path than normal. Getting your club started on an inside path (and staying on an inside path into and through the downswing) will ensure that you make a shallower swing path and ball-first contact. (Typical bunker shots, where you hit the sand first, travel on a steeper path.)

DON'T ALWAYS FIRE AT THE FLAG
It's tempting to hit toward the flag on every approach shot. That's why superintendents take great joy in placing them in dangerous locations, like just over a water hazard, or, as you see here, just beyond a bunker and a water hazard!

When you see flags tucked like this, take a moment to reconsider what your target should really be. Just because the flag is there, doesn't mean you should hit toward it.

Here you can see that I'm aiming to the left of the flag, where a strip of grass divides the two bunkers. Not only does that help me psychologically (it's always easier to hit over grass than a hazard), it also guards against dumping it in the bunker if I'm a little short. I'll land in grass and not be faced with a really challenging bunker shot.

Here, I'm faced with a challenging shot to a flag just to the right of a bunker. If I usually slice the ball and I aim at the pin, the ball will end up well right of the flag (and skip down into a looming water hazard). But if I aim left and play for my natural shot shape, then the ball will likely land close to the flag (even if it's tempting to aim at the flag because of that bunker guarding the left side of the green).

All too often weekend warriors try to pull off shots that only Tour pros routinely get away with. Rather than hoping for a career shot, do what Snead suggested and Dance with the one you brung.

CHOOSE THE RIGHT WEDGE
While wedges might not be the sexiest clubs in your bag, they are, outside of putters, the ones you hit the most during your round. (I bet you hit them more than you hit your driver.) So it's vital that you find one (or three) that fit your game (and your usual course conditions).

Wedge variations are virtually limitless, so make sure you factor in how much loft you need (48_¡-64_¡) and what bounce angle best serves your game (higher-bounce models perform best on softer conditions; lower-bounce models on harder turf). As a rule of thumb, I'd suggest four degrees of loft between your wedges.

Other personal preferences like head shape, color and weight also determine what kind of club you end up buying. Where to start? Try our 2010 Golf Equipment Buyer's Guide, online now at golftipsmag.com.

PLAY YOUR APPROACH LIKE A PUTTER
From the fairway (or rough or sand), try to see exactly what awaits your approach shot. If, as in the situation you see here, you're faced with a benign landing area, consider playing your approach shot like a putter. That is, low and running.

Play the ball back in your stance, choose a lower-lofted club (like a 7-iron) and chip your shot so it rolls down the fairway and up onto the green. Obviously if there's a water hazard or bunker in front of it, choose instead to hit a wedge and hit it higher so it carries the hazard and lands softly near your target.

In general, if you have a lot of green to work with, keep your ball low. It's easier to control, and your chance of success is far, far greater.

Dr. David Wright, PGA, is considered one of America's top 100 golf instructors. He teaches at Arroyo Trabuco Golf Club in Mission Viejo, Calif. Visit him online at wrightbalance.com and gripsize.com.