90 Degrees Makes It Right
The following pre-putt alignment routine is one that I developed with Patrick Burke and teach to each of my students. Its success has been so dramatic that many have adapted it to the full swing. It’s easy to learn and remember as long as you think in right angles.

The first step is to not get lazy when reading the putt. When you crouch down or stand behind the ball to determine your target line, do so with your feet together to keep you from opening or closing your body lines and distorting your view of straight.

Once you’ve determined the line, walk to a point roughly three feet behind the ball so that if you drew a line from it through where your ball lay, it would intersect the target line at a right angle. This step establishes the 90-degree angle that’s so crucial to successful alignment. Now, simply walk toward the ball and take your stance, again keeping your feet, shoulders and putterface square to your line.

After you’ve taken your stance, rotate (don’t lift) your head toward your target to verify your alignment. Any adjustment greater than a slight shuffle should necessitate starting the routine again from the beginning.

If you find difficulty in achieving a square setup with this routine, augment your practice with three cardboard slats. The slats serve as guides to ensure that your right angles are in place before you begin your stroke. One slat should point from the ball to your target; the second should point along the same line but in the opposite direction (away from the target); and the third should point toward you and form right angles with the other two slats. The Wright Angles of Alignment is a tool I’ve developed for putting alignment practice that sets these lines and angles automatically. 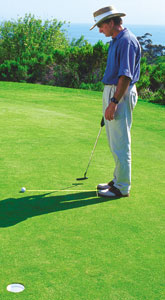 Practice the above mentioned alignment routine with the Wright Angles of Alignment or cardboard slats to verify or guide you into a square setup. After a while, the routine will become instinctual and you’ll reinforce in your mind’s eye what square not only looks like, but feels like, too. The guides should also be used to develop the most reliable of putting strokes–one that travels straight back and straight through along the intended line. 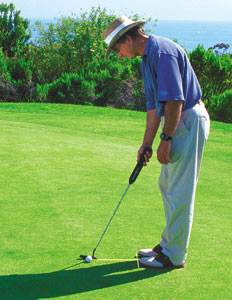 Final Thoughts
Developing a straight, natural putting line and squaring your body lines and putterface at address aren’t the only determinants of a successful putt. In perfecting your putting game, focus on these four key fundamentals.

Grip: Research shows that if you grip the putter too strongly or too weakly, you’ll aim the putterface right and left of your target, respectively, even if you perceive your putterface as being square at address. Strive for neutrality.

Forward-Press: If you forward-press, be certain that your hands remain neutral (that is, under your shoulders).

Remember, it’s hip to be square. Be neutral and balanced. If you must favor a particular weight distribution, make it one that features more of your weight placed over your front foot. This will ensure a stroke that continues down the target line after contact with the ball is made.