How many times have you faced this situation: you just missed the green and short-sided yourself to the hole, meaning you don’t have much green to work with between your ball and the cup. You have a little rough to carry so you can’t putt or bump and run the ball onto the green. You need a golf flop shot. 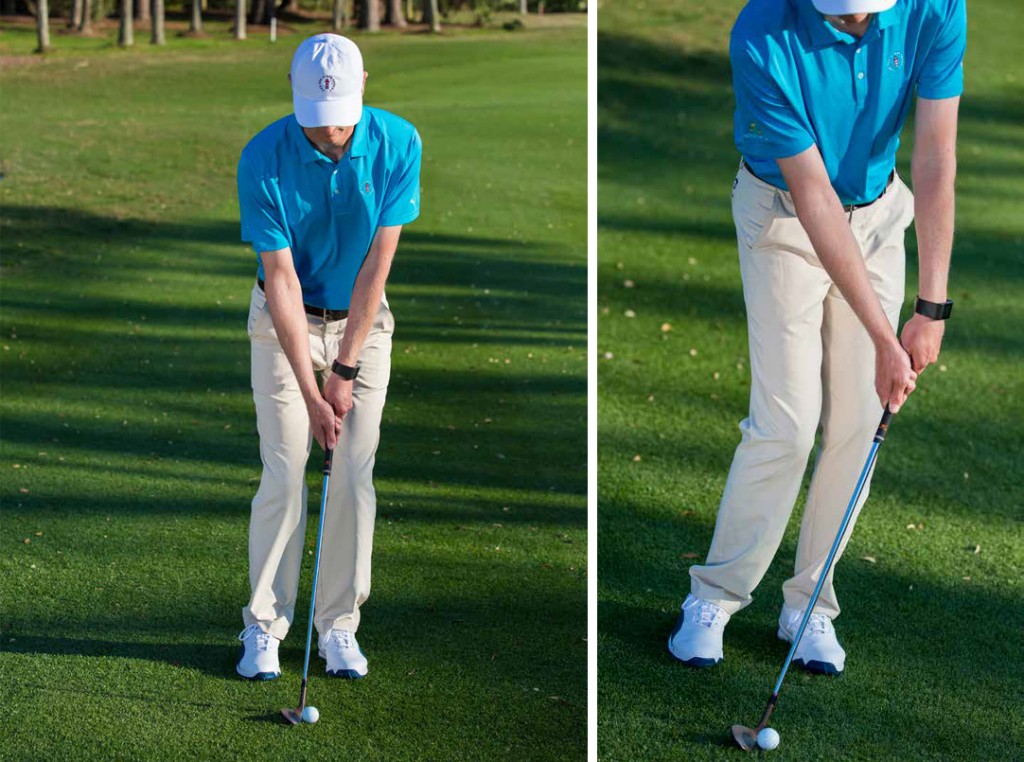 HOW TO PLAY THE SHOT

The key to playing this shot is returning the shaft at impact to less than 10 degrees of shaft lean in the most consistent way possible (left photo above). With a limited shaft lean at impact, instead of “handle dragging” through the hitting zone (right photo above), the ball will launch around a 40-45 degree angle, which means it will land around the same angle. This descent, along with a little spin that comes on any well-struck shot, will make the ball drop softly onto the green. 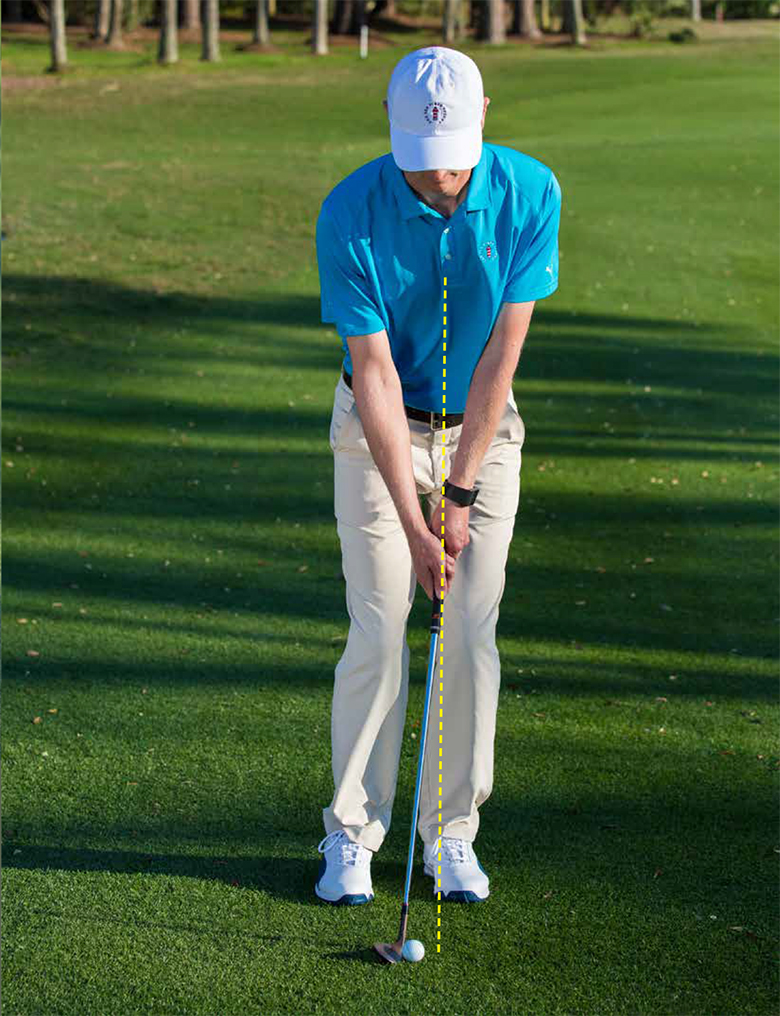 Take a narrow stance so that the outside of your shoes are under the edges of your hips. Position the ball in the middle to slightly forward of middle in your stance with a slight shaft lean (10 degrees maximum) and feel that you have 60 percent of your pressure on the front side of your body, as in the photo above. This will position your sternum slightly in front of the ball on a flat lie. Finally aim the clubface where you want the ball to land. 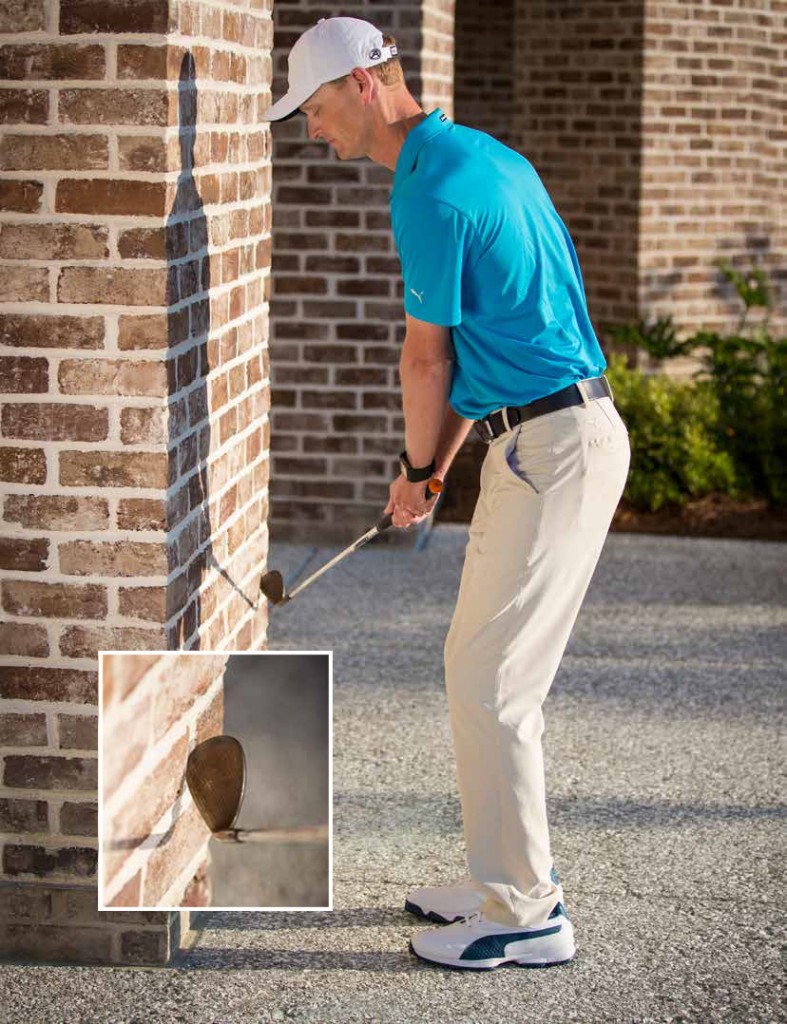 As you swing the club back, feel that the hinging of your wrists are limited so that the club face “rotates” naturally. If the club face becomes overly “closed” or “face down” going back, the club will dig into the ground too much at impact. To feel the movement of the club, try the following exercise: Set up next to a wall (no ball needed) and swing back, feeling the toe of the club head ride up the wall. 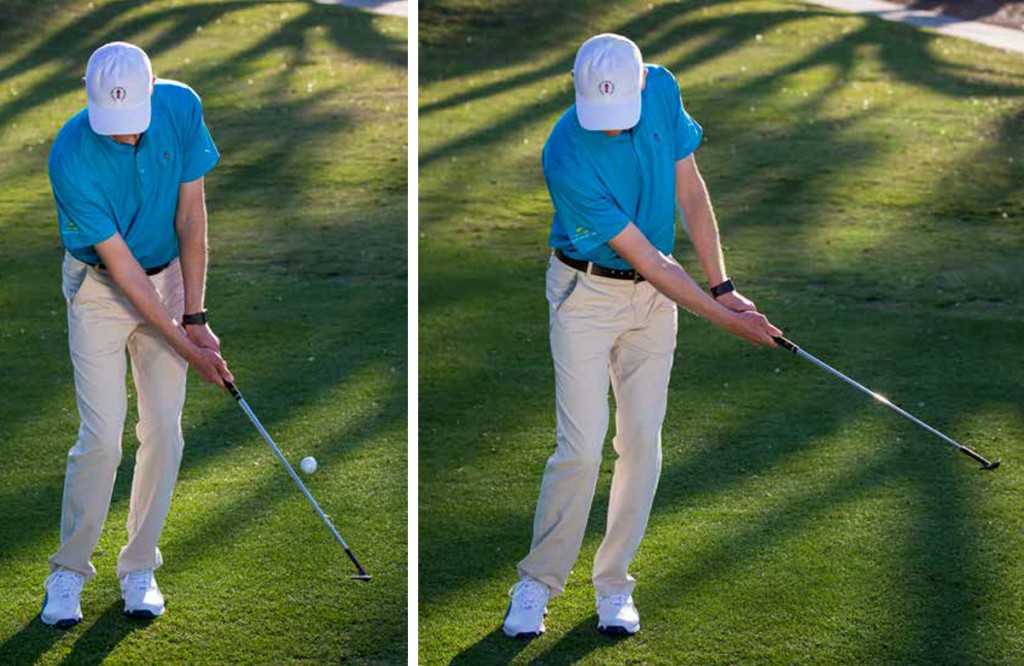 THE DOWN AND THROUGH SWING

The objective on the way down is to return the shaft angle close to its starting position, which is much easier to achieve with the “limited wrist hinge” feel on the way back. Another key to this shot, especially the extremely short-sided flop, is that you need a shorter through swing than backswing. By creating a shorter through swing, the club head will line up with greater ease with the shaft at impact. You will feel that you are “reverse twisting” the handle at impact to allow the clubface to slide under the ball and add more loft and increase the launch angle, as in the left photo above. Finish the swing with the club face looking up to the sky (right photo above).

To investigate how far the ball would roll out on a flop landing at this angle, I had five golfers of scratch handicap or better hit a shot that landed between six and seven yards away from them onto a relatively flat green. I had each golfer hit five flops with their lob wedge, launching the ball at 40-45 degrees and five launching at 32-37 degrees. All shots were hit using Titleist Pro-V1 balls and measured using TrackMan radar.

Next time you are spending some time in the short game practice area, work on adding this shot to your arsenal. As you can see in the results above, using the descent angle of the ball to reduce the roll on the green is a must when you are short-sided! Become comfortable with the set-up and work on the big to small backswing to through swing ratio. You’ll enjoy getting up and down more often.

Tim Cooke is Director of Instruction at Sea Pines Resort on Hilton Head Island, South Carolina. Read more about him and his golf school at www.seapinesgolfinstruction.com and follow him on Twitter @TimCookeGolf