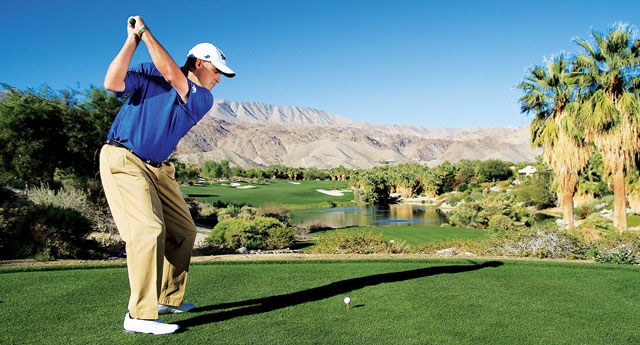 It’s a new year. It’s a new you. It’s time to kick those bad swing habits and make 2011 the year you play your best golf ever. I’m here to help you do just that, only this time, I’m going to help you make some immediate fixes that don’t require long hours at the practice facility. Nope. I’ve got 10 fixes for you that, in a matter of minutes, ought to help you drop those unwanted strokes and shatter your scoring barrier.

Most golfers who top their tee shots (you know, the ones that barely make it past the ladies’ tees) do so because they try to hang back and hit up on the ball. Ironic, isn’t it? Sometimes the harder you try to hit the ball higher, the more you’ll top the ball and drive it straight into the ground. In fact, some golfers top the ball so often, that they don’t realize the ball careens off the ground a few inches in front of the tee before it gingerly flies down the fairway. To cure the topped shot in a hurry, imagine you’re hitting two golf balls at the same time. The first is where you normally tee it up. The second is a few inches in front toward the target. By concentrating on the second ball, you’ll be more inclined to make a sweeping motion through the first ball, thus preventing the topped shot. And in case you’re wondering, a good drive is the result of a slightly ascending arc–something that will naturally happen when playing the ball forward in your stance with a driver. Don’t force it.

It’s awful, isn’t it? Sometimes a slice comes out of nowhere, and when it does, it usually gets worse by the end of the round. A great way to kill a slice right away is to monitor your grip pressure. If you grip the club too firmly, your hands won’t release quick enough, and you won’t be squaring the face at impact. So loosen your grip pressure–just don’t go so loose that you can’t hold the club securely. Second, as you can see in the photos, I like to wear a watch when I play. It reminds me that the back of my left hand (the watch face) ought to face the target at impact. If the watch is facing up or to the right, a slice is imminent. Wearing a watch is a great way to train and remind yourself where the hands should be at impact, thus killing that nasty slice.

This shot is particularly frustrating because not only is it weak and embarrassing, but it’s likely to leave what’s often called an idiot mark on the crown of your driver just above the face. Nobody wants that. Most golfers who pop up their tee shots do so because they swing too hard with their upper body and, as a result, hit the golf ball at a very steep angle. The trick to stop the pop-up shots is to relax the upper body and initiate a bigger and better rotation of the lower body. By doing that, you’ll effectively shallow-out your plane, and your arms will follow your body instead of leading it. The result? A more level swing plane and nary an idiot mark ever again. Relax those arms and use more body!

A thin shot is generally better than a fat one, but not if there’s trouble looming behind your target. In any case, hitting it thin isn’t unlike topping your tee shots with a driver. In most cases, it’s because the golfer is trying to lift the ball off the ground and into the air. This is the last thing you want to do! A successful golf shot is one that hits down into the turn and uses the loft on the iron to lift the ball upwards. Also, check out my left side around impact. See how my left arm is not only straight (indicating I haven’t tried to lift the ball up), but also stacked over my left leg. This is what you want to look like at impact. So think stack your left side and you’ll thin it less often. 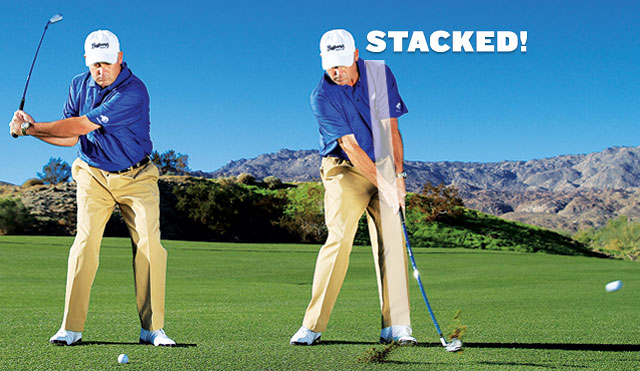 Hitting it fat? Like a thin shot, you’ve got to stop trying to lift the ball into the air! Allow the club’s loft to handle the lifting, and concentrate on getting your weight off your right side on the downswing. To do this, initiate your downswing with a slight bump of the hips toward the target. By doing this, you’ll center your body’s rotation more over the golf ball, helping to avoid hitting the turf before the golf ball. If you’re hanging back, you’ll be hitting it fat! And by the way, let’s say you’re making a good swing and still hitting it fat. Sometimes a simple adjustment in ball position (move it back) will make all the difference. Get that ball just in front of the lowest point on your swing arc.

Hitting a shank is one of the worst shots in golf. It not only can send the ball a mile offline, but it reeks havoc on one’s confidence, often causing the golfer to tense up with the yips–thus making a shank even more likely. Most shanked-pitch and short-iron shots can be avoided if you remember one simple tip: Keep the head and upper body from leaning too far toward the golf ball during the swing. Because you’re using a shorter iron and your spine angle is greater than with a longer iron or wood, excessively leaning toward the ball becomes a lot easier to do. When this happens, you have little to no hope, as the clubhead is most likely to strike the ball on the heel, or worse, on or near the hosel. The next time you find yourself shanking the ball, try standing more upright at address, and retaining a more upright upper-body posture through the shot. This may steepen your swing a bit, but it will also keep that hosel away from the golf ball at impact.

Having a short pitch shot ought to be an easy one, right? Not if you have a tendency to chunk ’em. In most cases, chunked pitches come from an improper spine tilt at address. If anything, most golfers have too much negative spine tilt (the right shoulder is lower than the left). This causes the low point of the arc to move too far back in the stance, and you’ll hit the turf before the ball. To correct this fault in a hurry, consider a more level spine tilt at address, i.e., don’t raise your left shoulder so far above your right. A more level shoulder position will move your low point forward to help you hit the ball first, then the ground.

Bladed chip shots are never pretty, especially when you’re trying your best to get up and down to shoot a low score. Like a few other flaws I’ve covered in this article, bladed chips usually come from trying to lift the ball from off the ground. Again, this is a big no-no. To stop this nonsense once and for all, practice hitting a few shots with a tee about three to four inches in front of the ball. As you make your stroke, make sure with each chip, you clip that tee and pop it up off the ground. This mind/body memory trick will help you stay down and through over your chips and stop blading the ball and wasting strokes around the green.

The best way to control the direction of a short chip shot is to use your putter. But if the shot doesn’t call for a flatstick, make sure you have good aim when using your wedge. The simplest way to do this is to retain the Y-position formed by the arms and the clubshaft through the stroke. This minimizes the opening and closing of the clubface and helps you mimic a putting stroke. By making this type of stroke, you can simply set your aim and then concentrate more on distance control–which, in most cases, is more important than direction anyway.

What’s the root of most three-putts? It’s not necessarily that golfers miss a lot of short putts; rather, their lag putts aren’t that great and their short putts are longer than they ought to be. And the secret to better lag putting? Confidence and distance control. First, you need confidence to get the ball to the hole (short putts never go in). And second, you need to know how to manage the right distances to set up easier second putts. A great drill for this is to practice from varying lengths around the green and use a club about two feet behind the hole. As you practice, try to make every putt, but also try to keep your misses between the hole and the club. If you can consistently keep your misses one to two feet behind the hole, not only will you make more long putts, but you’ll also find yourself with shorter short putts and fewer three-jacks!

Tom Stickney, PGA, teaches at Bighorn Golf Club in California and The Club at Cordillera in Colorado. For more information, visit tomstickneygolf.com.