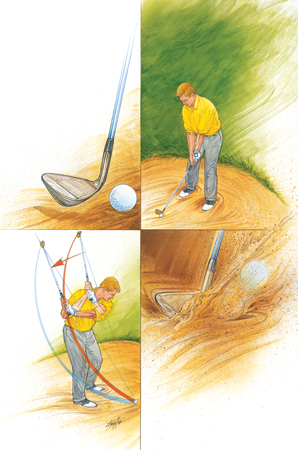 Bunkers elicit a common reaction from most recreational golfers. That reaction is fear–fear of leaving the ball in the bunker, fear of blasting it over the green, fear of looking foolish, etc.–and it stems from misunderstanding how a sand wedge is designed to function.

Look at your sand wedge. Notice how the trailing or back edge of the club is lower than the leading edge. That angle is called bounce and it’s what allows a sand wedge to slide through the sand. To create this sliding action, the back edge must enter the sand before the leading edge, which is designed to dig into the ground.

In order for the trailing edge of your wedge to strike the sand first, your bunker swing must include four essential components. To discover if you’re using the proper technique, try to hit 15- to 20-yard shots from a greenside bunker with a 7-iron. To pull off this shot, your technique will require the critical features of a successful bunker swing, which are as follows.

1. The clubface must be open at address Opening the face effectively exposes the all-important bounce of your sand wedge, which allows it to easily slide under the golf ball. With the 7-iron shot, you’ll need to open the face a good deal in order to create enough height to carry the lip.

2. You must sit down in your stance Get set with most of your weight in your heels, with your stance open to the target line by five to 10 yards.

3. Swing the club on a shallow plane–or more around your body_Ê This flatter (compared to steep) swing is what allows the trailing edge of the club to enter the sand first. Your divot should point left of the intended target.

Practice shots with your 7-iron until you can successfully blast out of the bunker three of every four shots. Then, try the same shot with your sand wedge, using the same principles. With the sand wedge, you won’t need to open your stance or clubface as much and your swing plane won’t be nearly as flat, since you’ll be standing closer to the golf ball. The best part of the 7-iron drill is that it instills confidence. After all, if you can hit a 7-iron out of a greenside bunker, how easy will it be with a sand wedge?

Rob Stock is an assistant golf professional at Farmington Country Club in Charlottesville, Va., and is a former Dave Pelz Short Game instructor