Short game has been my passion since I realized that it is the biggest equalizer in golf. Not everyone is able to hit the ball solidly nor should we fool our students into believing they can, but everyone can learn to be a good short game artist. We all know the importance of putting and distance control, but it’s time to discuss chipping instruction, especially to juniors, though there’s plenty here for adults, too.

I teach students at the Lion Golf Academy two options to chip. Option one is higher in the air, option two is lower in the air. Obviously, it really all depends on the lie, position, and situation you are in, but I can tell you that most people, adults and juniors alike, hit too many high shots.

Why? Maybe because we think it is better. Maybe because we see flop shots on TV by the best golfers in the world who spend hours a day practicing those shots and admire the talent it takes. I agree there is satisfaction in accomplishing them but is it worth the gamble? If you want that rare shot that may give you the joys of tour players with a very low success and a high risk rate, then go ahead. But don’t expect your scores to improve, or to gain the ability to learn the art form of scoring. 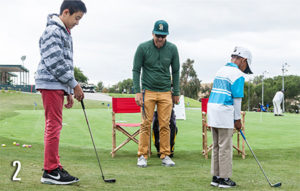 Paul Runyan, better known as “Little Poison,” was one of the best short game artists of all time. Standing 5 feet-7 inches tall and weighing 125 pounds, he won nine PGA Tournaments in a single season in 1933 and won 29 total PGA tournaments including two PGA Championships. This man earned that nickname and he owed it entirely to his short game. He didn’t hit it long enough to reach many holes in regulation but found a way to still score by relying on the greatest equalizer in golf, his short game.

There was a story of him beating Ben Hogan in a round of match play, and the reporters asked Hogan how he enjoyed Paul Runyan’s game and company. Mr. Hogan replied only as he could: “I never saw the man other than the tee box and the green, and I liked him better on the tee box.”

My students are aware of the “little poison” only because I teach them his style of chipping. Hands high, weigh left, swing left, stay left, and usually with a 6 or 7 iron, as I’m demonstrating in Photo 1. It is a very basic motion with very little to no wrist movement and resembles that of a putting motion. The ideology is to keep the same motion and swing arc, but just change out the clubs. It deals with math, and ratios.

The 9 iron will probably carry 50 percent and roll 50 percent, while the 5 iron will carry 15 percent and roll 85 percent. It all depends on the slope of the green, angle, lie, position of shot, etc. It requires the player to walk the shot beforehand and think about where they wish to land the ball, and how much break and run they wish to use (like a putt) then choose the club that allows that ratio.

You would have to have the student practice an awful lot with each club to get the ratios, but make sure the swing doesn’t get further or change. That is the beauty of it. When it comes to the high/low option choice, I al-ways teach my students to look low first, and as a last resort to look high if you “have” to flop it.

In the high option you have very little control with a longer swing, usually hitting it a short distance. On the low shot, you have more control and learn to read the chip like a putt, and it is a shorter motion that is easy to duplicate and goes further. Less is more!

To help the students discover and test this theory, I usually use bright red chairs so it’s easy for them to see the goals (Photo 2). I ask the first set of students to hit a high flop shot that has to go over the chairs (Photo 3); they get three shots each. If they are lucky enough to clear the chairs, then those shots qualify for our closest to the pin contest.

This is a great drill to help the student learn through experience which shots are a higher percentage than others without forcing that decision on them. When you involve the student to make those decisions through experience, you will be amazed with the increase of growth on both decision making and planning and executing.

Utilizing what we know about putting through distance control only gets amplified through chipping. The idea is to teach the student that everyone can plan and execute the short game. It only takes time, and a little patience with each student starting with fundamentals like grip and stance (Photo 4).

I am a huge believer that the full swing is mostly talent driven, but the short game from 30 yards and in is mostly correct practice and time investment. It’s something we can all agree on that most people still fail to do. Most people would rather spend hours on the range learning how to hit shots that equals 40 to 50 percent of your game on the course.

If most people switched that ratio to putting and chipping, the national handicap would go down rather quickly. We have just been trained to believe that distance off the tee and spending thousands of dollars a year on new equipment is the secret. If I added up all the 10 yards every manufacturer has promised me over my life of golf, I would be able to hit the ball over 3,000 yards. Don’t drink the Kool Aid, folks; correct practice, and time on the green and surrounds will make you a better player.

I challenge everyone as a family to get out on the chipping green, putting green, and practice bunkers and spend some good quality family time and do these drills, and come up with your own game to help you learn and practice — and most importantly, to stay on that practice green.

Next time: Full swing mechanics and drills; how to have fun with your child on the range and learn at the same time.