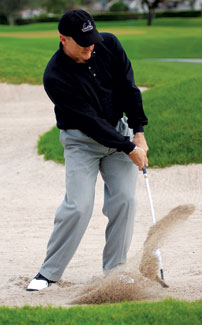 There aren't many shots that touring professionals fear, but if you had to choose one, the buried lie bunker shot would probably take the cake. It's a shot even more feared among amateurs who have no idea how to approach it, let alone how the ball will react off the clubface and once it hits the green. I've always believed that a buried lie isn't a cause for despair, but rather an opportunity to demonstrate your short-game prowess. With some adjustments to the normal bunker setup, you can accomplish the goal of getting out of the bunker and onto the green every time.

Begin by choosing the most lofted club in your bag, which for most is a sand or lob wedge. Set up to the ball with a slightly open stance and with your feet worked into the sand an inch or so for stability. The stance should be narrow (feet shoulder width apart) and your weight should favor the front leg. This helps you hit the ball sharply with a steep blow. Play the ball slightly forward of the middle of your stance and choke down on the shaft to compensate for digging into the sand with your feet.

Sounds like a normal bunker shot so far, right? The difference with a buried lie, however, is that if you open the clubface too much, you actually can hurt your chances of getting the ball out of the sand. Here's why: When you open the face too much, you add what's called effective bounce to the sole, thus making it difficult to sweep underneath the ball in order to get it airborne. With an open face angle, you'll catch the top part of the ball, essentially killing any chance at an easy recovery._Ê

The correct way to address a buried lie in the bunker is with a square or even a slightly closed clubface (relative to the target). What this does is reduce the clubhead's bounce angle, helping you use the sand between the clubhead and ball to lift the ball up and out. Plan on striking the sand at least two inches behind the golf ball with a steep and accelerating blow. Remember, the club doesn't need to come into direct contact with the ball. Instead, the digging action of the clubhead as it moves underneath the ball will force the sand to push the ball up and onto the green. Since you'll be hitting the sand well behind the ball, be sure to swing harder than you normally would if the ball was sitting up. Hold the face square for as long as possible through impact and expect an abbreviated followthrough. You'll find that the ball will come out of the bunker lower with less backspin, causing the ball to roll forward upon impact with the green.

As you can see in the photo, I've not only held the clubface square through impact, I've clearly hit the sand before the ball. You can see this by the clump of sand that's ahead of the ball in the air. Experiment with what face angle, either square or slightly closed, works best for you. Remember to keep the face square and hit down into the sand before the ball with more force than usual. In no time, the buried lie will be no more feared than a regular bunker shot.

PGA teaching professional John O'Leary III is the director of instruction at the Arnold Palmer Golf Academy (APGA), located at the Bay Hill Club & Lodge in Orlando, Fla. At the APGA, game improvement is directly related to the fundamentals that Arnold Palmer learned from his father, which were instrumental to his success. For more information, visit www.apga.com.