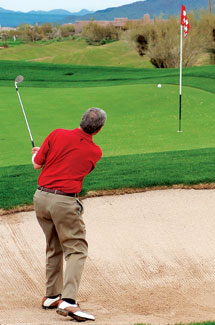 Bunkers are the only place on the golf course where you’re not always required to hit it perfectly. It’s okay—even encouraged—that you sometimes hit it fat, hold the face open through impact and minimize your weight shift and rotation. So why, then, are golfers terrified of what seemingly should be one of golf’s easier shots? Astonishingly, the top player on the PGA Tour through 20 rounds of golf this year—Luke Donald—has nearly a 90 percent success rate from the sand. There’s no reason you can’t be at least half that good.

I’ve concluded that it’s not the sand that’s the problem; rather most golfers just don’t understand the basic principles behind how the ball is going to react in a bunker. Will the ball pop out with a high or low trajectory? Will it roll on the green or check up and stop? Do I have to swing hard or soft? These are the kinds of questions I hear most from golfers who haven’t a clue on what to expect, how to swing and what club to use from the sand.

The first step to taking the guesswork out of bunkers is to first and always analyze the situation and then decide what club to use and what shot you need to execute. Most amateurs do those steps in the exact reverse. They grab their sand wedge, address the ball and then decide what needs to be done. Sound familiar? If so, we need to change your routine.

Putt It Out
Sometimes the best way to get out of a bunker is to not hit the ball at all. Try putting it instead. Like all shots from the bunker, you must first assess the situation and determine if the putter is the right choice.

Using a putter (the good ol’ Texas wedge) to escape a greenside bunker should only be attempted if the sand in the bunker is firm, the lie is decent (not buried) and the bunker itself doesn’t feature a lip, or if it does, a very small lip with a rounded edge. If you try this shot without each of these conditions being met, be ready to hit two shots from the same place. 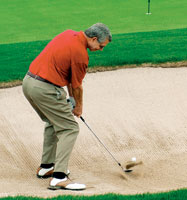 From your clean lie, address the ball as you normally would with a putter on the green, with your weight centered over both feet and with your standard putting grip. Play the ball back in your stance, which will help prevent touching the sand through impact. In this situation, unlike other bunker shots, the key is to catch all ball and no sand, so plan on striking the upper hemisphere of the golf ball with the putterface. Expect the ball to roll much like it would on the green and then pop over the lip. Because you’ll be hitting all ball and no sand, and the ball may pop up when it hits the lip, don’t be afraid to hit this shot harder than you would a normal putt from this distance. The off-center strike and spin from the hop will reduce the speed of the ball, so give it a good hit. With a little practice, you’ll find that this shot reigns supreme and nearly takes out all the guesswork from low-lipped bunker shots.

Middle Iron
If you find yourself in a bunker with a medium-sized lip, in firm to medium sand with some green to work with, this shot is an absolute lifesaver. There are three reasons why I prefer this shot to a standard bunker blast from this position: 1) It gets the ball rolling on the ground quicker than does the play with a sand wedge, and it’s always easier to control distance and accuracy when the ball is on the ground than when it’s in the air; 2) It’s more difficult to know exactly how far to fly the ball to get it close to the pin than it is to simply get it moving along the putting surface; 3) It does not require sand-first contact—a tricky play for most high-handicappers.

With your 7- or 8-iron (depending on what trajectory you prefer), address the ball with your weight and hands forward, but with the ball positioned in the middle-back region of your stance. Your feet should align slightly open of your intended target, with the clubface facing the target and your shoulders parallel to the target line. To get a feel for the proper position, think of the stance and swing you’d used for a greenside chip. Choke down on the iron, and with a descending blow, hit down onto the ball. Notice how my body is quiet and most of the motion is in my arms. Unlike a typical sand blast, in this case, you want to hit the ball first, and the sand second. The ball will come off the face low and with roll, so make sure you have some green to work with. Think of the 1⁄3-2⁄3 rule: the ball will carry 1⁄3 and roll 2⁄3 of the way toward the hole. Another great thing about this shot is it’s an effective way to control trajectory and distance from those hard-to-play fairway bunkers within 100 yards.

Pitching Wedge Pick-And-Chop
On occasion, you’re going to encounter a shot that’s either sunken or semi-buried in the sand. Despite what you may think, this shot isn’t as difficult as it looks. The key is using the right club for the job, which in this case is the pitching wedge.

The pitching wedge, like a sand wedge, has plenty of loft, but more importantly, pitching wedges have lower bounce angles than sand wedges. What this means is the pitching wedge is more effective at digging into the sand, which is critical for playing from sunken lies. Address the ball with your feet slightly open and the ball in the back of your stance, with a stronger than usual grip. Make sure your hands are forward and the clubface is square or even slightly open to the target. The key here is to minimize body turn and make a steep, descending blow into the sand precisely where the ball and sand come into contact. I like to call this the pick-and-chop shot. Be sure to take the club back more upright than usual and descend into the ball with no followthrough. The club should stick into the ground, and the ball should lift out of the sand with plenty of height. Unlike a regular sand shot, this shot will produce some roll. Notice how my body remains relatively quiet, and my arms do most of the work.

Equip Tip: Sand Savers
The industry has recently unleashed several models made specifically to erase the difficulty of extricating the ball from a bunker. The Hogan Sure-Out is a modern iteration of The Hawk’s famed specialty club. Nowhere near as traditional is the F2 wedge, engineered with an onset hosel to encourage sand-first contact. MacGregor’s V-FOIL EZ-OUT features an oversized back structure to help the club glide through the sand. The crescent-cut sole on the innovative Solus wedge allows the golfer to add or remove bounce as needed.

Traditional Sand Wedge
Whether you have a good lie or a bad lie, the traditional sand blast is an effective shot when you haven’t much green to work with or you’re faced with a huge lip between your ball and the hole. Begin by choosing either a 56- or 60-degree wedge, and address the ball with your body aligned to the left and the clubface aimed to the right. If you aim your body 20 degrees left of the target, then be sure to open the clubface 20 degrees to the right of the target.

When playing the traditional bunker blast, make an effort to swing along your body line—not the target line (remember, your body is open to the target). When you do this, you’ll find yourself taking the club back on an outside-in club path, which is ideal for helping you keep the clubface open through impact. In this shot, there’s no release or flipping of the hands. Hold the face open as long as possible, and be sure your right hand remains under your left (for right-handers). Remember to open the clubface when you take your grip. Don’t grip the club and twist your hands to open the face—that’s a big no-no. Unlike the aforementioned bunker shots, in this case, you want to make contact an inch or two behind the ball, with a full followthrough. To negotiate different distances, simply adjust the degree your body and face angle are from the target. On closer shots, address the ball more openly. On longer bunker shots, address more squarely to the target. With this shot, you’ll generate some spin, so expect the ball to fly most of the way, hop and skid to a stop.

Playing from the bunkers requires an open and creative mind. But to really become proficient, like everything else in golf, solid bunker play requires solid practice time. Experiment with these shots and concentrate on how the ball reacts to these four different approaches. In no time, you’ll find yourself more confident in knowing exactly what to do.