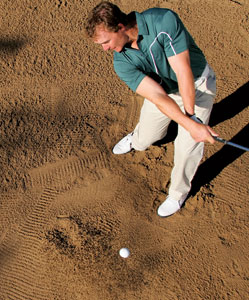 If only we could tee up every golf shot. We’d always have perfect lies, where no grass or trees or sand could get in the way of making clean contact with the ball. Of course, that isn’t the case. Between the tee and green, we have to surrender to the course and play the ball as it lies. That means adjusting to a number of challenging circumstances, such as plugged bunker shots and awkward stances. For this story, I’ve concentrated my efforts on just those types of lies–the ones you get where you look to your playing partners, throw your arms in the air and say anybody have any suggestions? Take time to practice these shots, and you won’t wonder what to do the next time you’re faced with an awkward lie._Ê

Downhill Lie This shot is probably the toughest to tackle, as you not only have to contend with the slope, but with the edge of the bunker as well. The first thing I do is adopt a stance that creates balance. As you can see, I’ve done that by placing my right foot outside the bunker. Secondly, notice that I’m playing the ball back in my stance with my shoulders tilting downward to match the slope. From here, it’s all about finding and feeling the angle of attack to help me clear the lip and get the club safely into the sand behind the ball. To get the job done, I’ve adopted a fairly abrupt, upright motion.

Ball Below Feet A key point to remember when the ball is below your feet is that your posture requires quite a bit of bend from the hips to ensure that you get down to the ball. Instead of a rounded swing (like when the ball is above your feet), think of your swing going more up and down, like a Ferris wheel. Another key point is to remain committed, stay in your posture through impact and finish your swing!

Ball Above Feet When the ball’s above your feet, it’s imperative that you create a swing that follows the contour of the bunker. Stand a little taller, and grip down slightly on the club’s handle. Then make a swing that’s relatively shallow and rounded, not upright. Since a ball above your feet will tend to produce a shot that flies left after contact, make the necessary alignment adjustment, and aim more to the right._Ê_Ê_Ê
_Ê_Ê_Ê

Plugged Lie Escaping from a plugged lie requires keeping your clubface square (the only time you’ll do so when hitting out of the bunker). With most of the ball beneath the surface of the sand, you’ll need to get some dig out of your impact, so play the ball in the center of your stance and adopt a severely upright swing, picking the clubhead up quickly, then chopping into the sand and exploding the ball out and onto the green. Since most of your force is downward, don’t try to swing into a traditional, full finish. Instead, leave the clubhead in the sand with an abbreviated followthrough. This shot will come out low and void of any spin, so plan accordingly.

Uphill Lie When confronted with an uphill lie, play the ball forward in your stance, much like you would a standard bunker shot. The key point, however, for uphill lies is to get your swing and shoulders to match the slope of the bunker. The ball will come out high and short, so a little more speed is necessary to fly the ball the correct distance. In addition, be careful that you find solid footing, as the upward slope will tend to push your body away from the target and lead to bladed shots.

Jeff Ritter is the Director of Instruction at the ASU Karsten Golf Academy in Tempe, Ariz. To learn more about his teaching and to read some of his other tips, visit www.jeffrittergolf.com._Ê