The dictionary defines a fundamental as the basic function or movement of something. The game of golf has its own set of fundamentals. They serve as our basic framework for golf instruction and help us work within the laws that govern ball flight and ball control. However, as instructors and coaches we sometimes inadvertently misuse the word “fundamental.” We sometimes end up presenting a simple motion preference or unique individual swing characteristic as a rigid, inflexible fundamental. I call these “anti-fundamentals” and since they are often individual in nature and not applicable to the golfing population as a whole, they can often be very damaging to your swing and score, especially in the short game.

In fact, nowhere in the game are “anti-fundamentals” more prevalent than in the world of short game instruction. In the following tips I’ll share with you the five most common.

ANTI-FUNDAMENTAL 1: BALL BACK AND LEAN FORWARD

I hear this one all the time when talking to golfers about their wedge game. They mistakenly believe that hitting sharply down on the ball with a lot of forward shaft lean, as in the photo at left below, helps to ensure they catch the ball first and get clean contact. In fact, the exact opposite is most likely to happen. When you de-loft the club that much you remove any bounce from the bottom of the sole and use too much of the leading edge. That effectively turns the club into a small shovel and greatly reduces your margin for error. 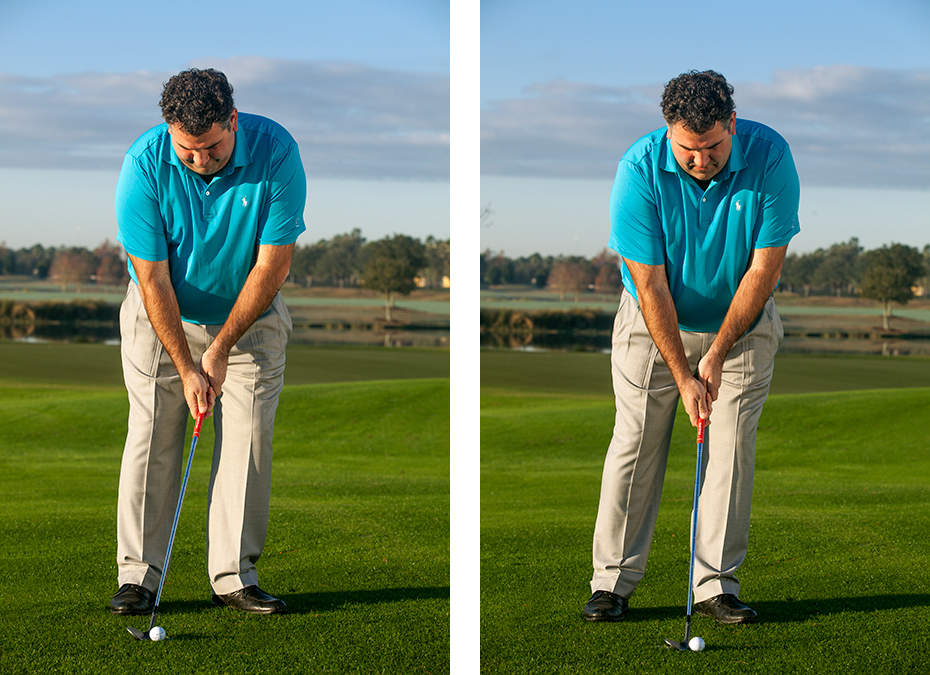 If you’re going to lean left you’d be far better off moving the ball closer to the middle, or slightly forward, in your stance and using a more neutral (standing straight up-and-down) shaft lean, as in the right photo above. It makes the club much more functional because you’re utilizing the bounce properly. 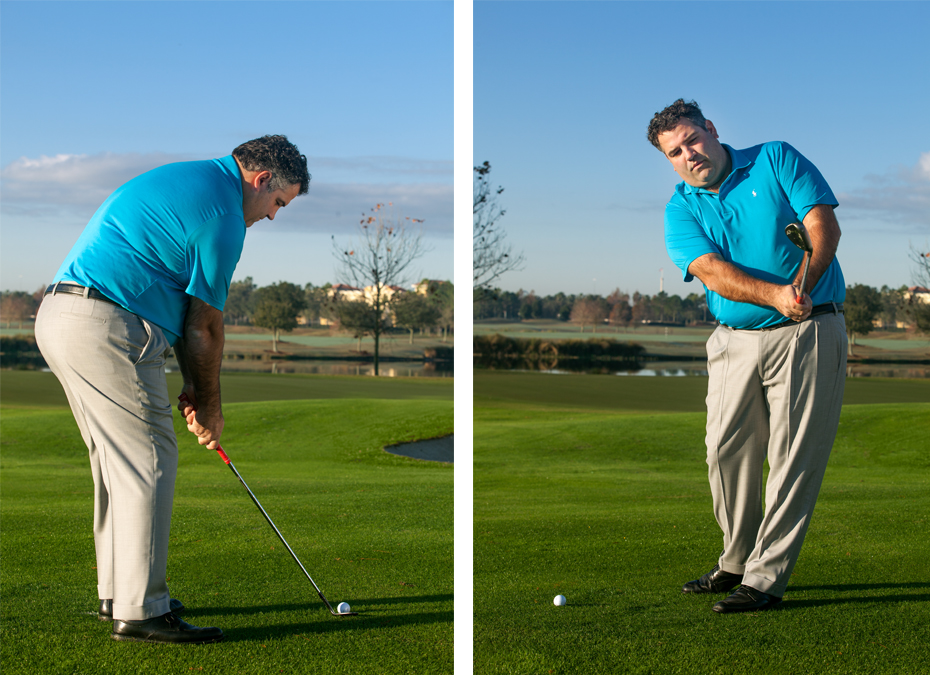 I’m not really sure where this one came from but it’s probably the most prevalent — the idea that if you’re going to hit a chip or pitch you should open your stance and swing the club left through impact, as in the photos above. If you swing the club left of your target line then you have to open the face to get the ball to actually fly toward the target. That discrepancy between the path and face makes it much more challenging to gauge starting direction and puts wicked sidespin on the ball. Neither of which makes it any less challenging to get it close with a wedge! 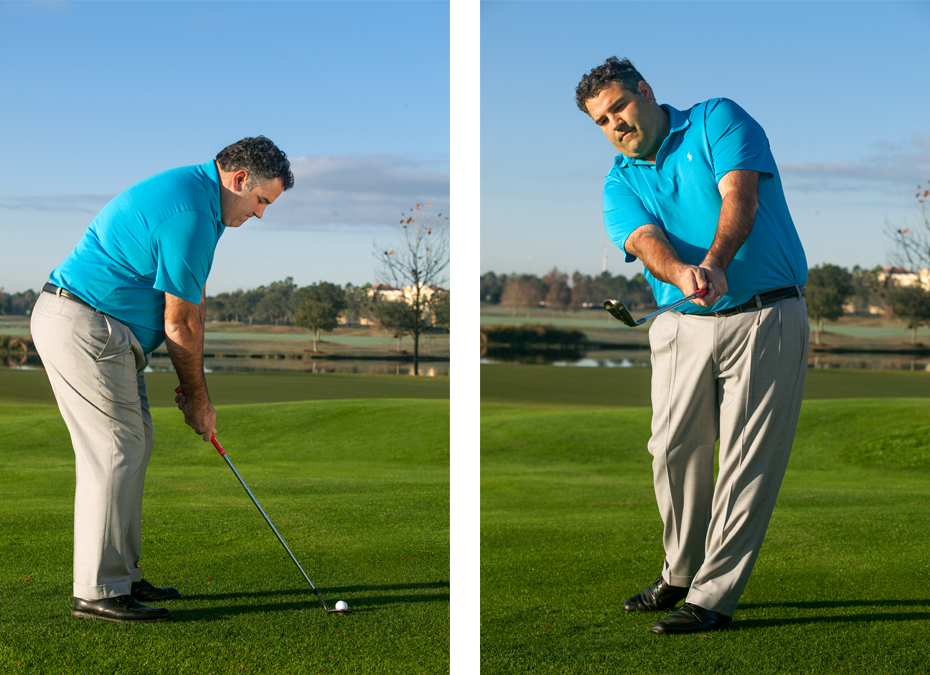 Instead of aiming and swinging left, just set your body up square to your intended target and swing naturally along your foot line like you would with any other club, as in the photos above. If you need to open the face on your wedge to add some loft go ahead and do so. Because of the significant loft on your sand wedge or lob wedge, a face angle change will not affect the direction the ball flies like it would with an iron or wood.

ANTI-FUNDAMENTAL NO. 3: ONE CLUB FOR ALL SHOTS

Imagine a carpenter showing up at your house to do repair work and the only tool he brought with him was a screwdriver. That’s exactly what happens when you try to use only one wedge — a 60-degree, for instance — to hit all different shots around the green. 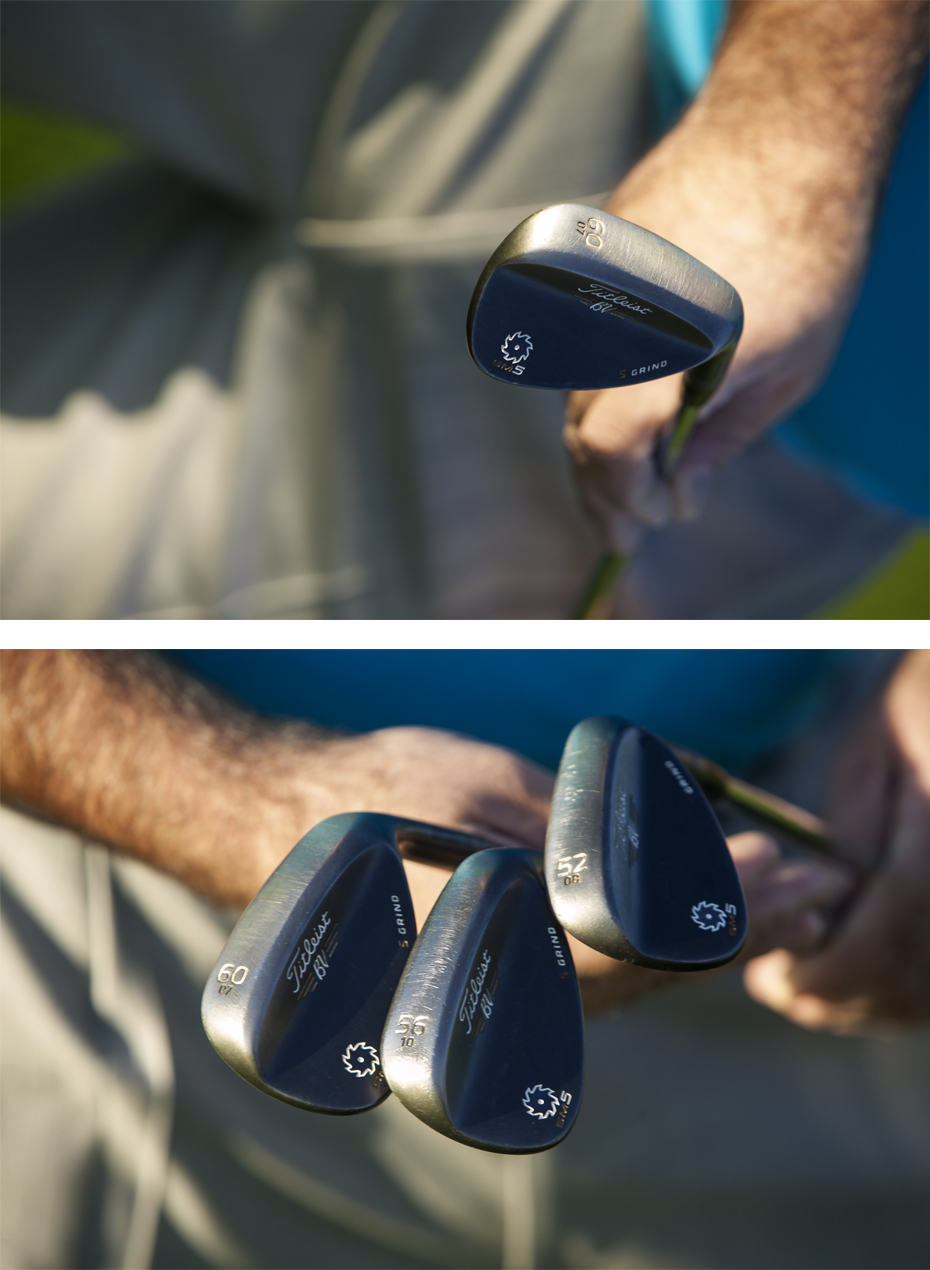 Statistics tell us that whether you shoot 68 or 108, over 70 percent of your shots will be hit with less than a full swing. Just like the carpenter needs a multitude of different tools to suit the task at hand, so do you when faced with an endless possibility of short game shots during a round. Instead of carrying only wedge to hit every shot, consider making room in your bag for three or four wedges, as in the photo above; your 5-wood won’t mind taking a break this season.

ANTI-FUNDAMENTAL NO. 4: CHIP WITH STRAIGHT ARMS

This is an old one. “A chip is just a putt with a lofted club,” or “keep your arms straight so you don’t flip the club” are comments I hear every day as I walk around the practice green. Here’s the thing: a chip shot is NOT the same as a putting stroke, and I’ve never seen any other athletic endeavor using a stick and ball that is performed with “stiff” arms, as in the photos below. 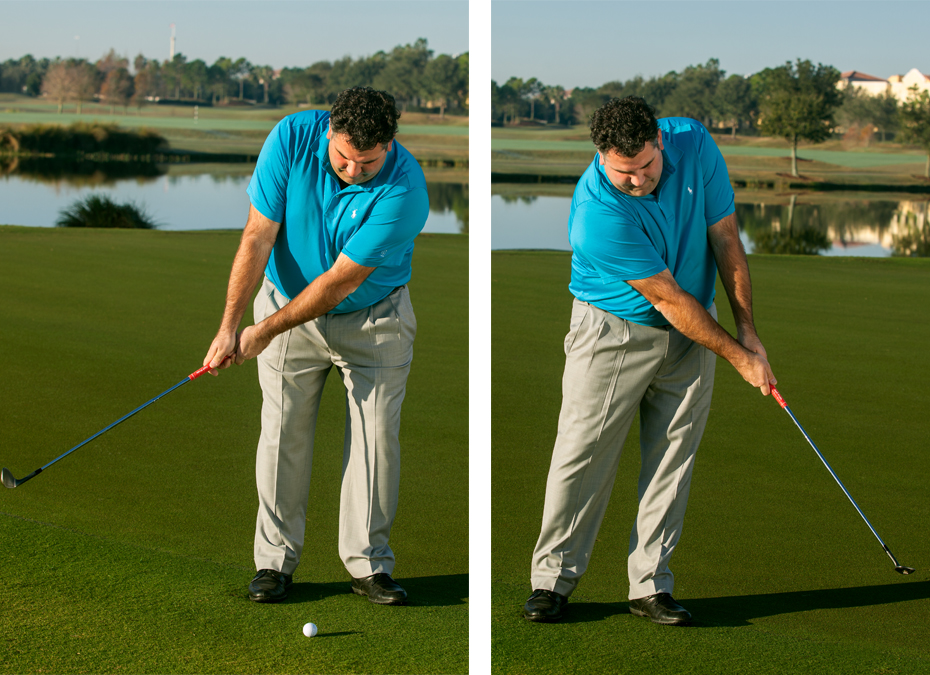 If I were to hand you a ball and ask you to stand in a golf posture and lob it underhanded onto the green, you most certainly would not do so with stiff arms. Your trail arm would gently fold on the backswing and the wrists would hinge the club up slightly, and the same would happen on the other side of the swing in the follow-through, as in the photos below. The motion comes from the softness and lack of tension in the arms as the swing begins. It provides you with the same feel for distance control as if you were simply tossing the ball. 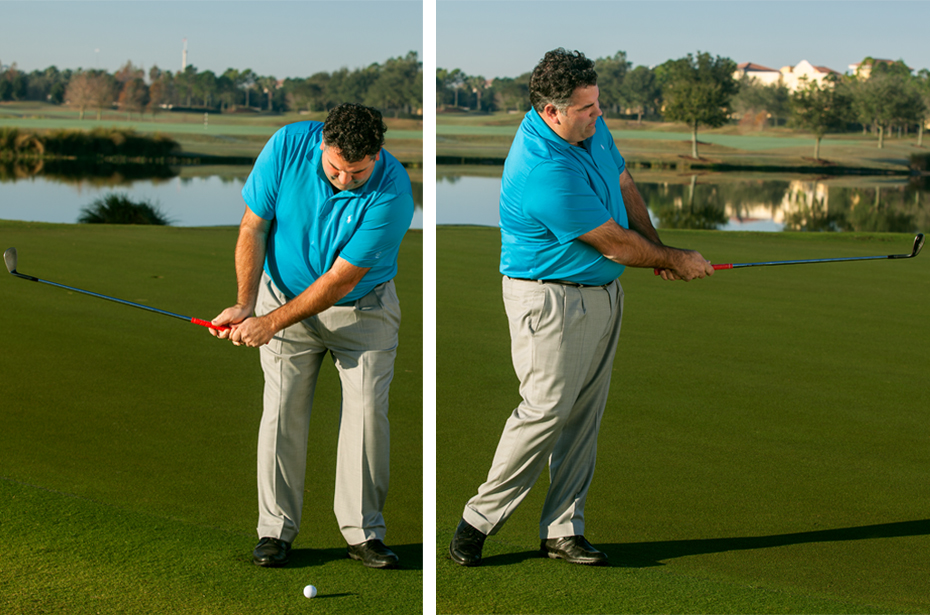 ANTI-FUNDAMENTAL NO. 5: LEAN FORWARD AND HIT DOWN IN A BUNKER

This has the potential to be one of the most damaging anti-fundamentals of them all. Because we don’t actually strike the ball (we should hit the sand 1-2 inches behind the ball), being a good bunker player requires total control over where the club enters the sand and depends heavily on being able to regulate the amount of sand between the clubface and ball. Both are extremely difficult it you’re taking a large, deep divot of sand…which is exactly what will happen if you have too much weight on your forward foot and you swing down steeply into the bunker, as in the photo below. 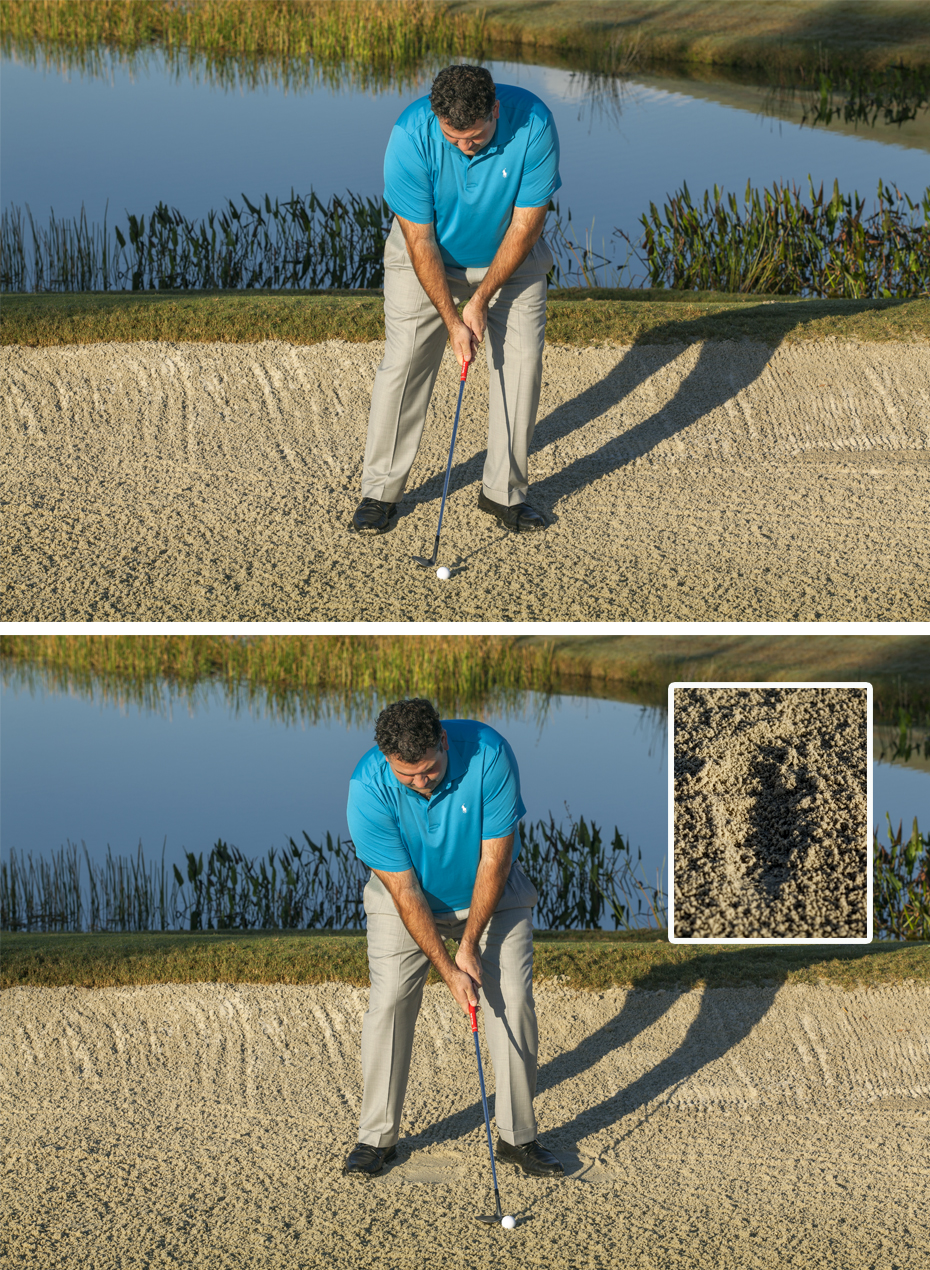 You’ll find it much easier to play shots out of the bunker if you make a longer, shallower divot that minimizes the amount of sand you take (see inset photo above). In order to do so you must make a swing with a flatter bottom that barely “skims” the sand as it hits the ball. This is accomplished with a set-up that has the ball forward and the weight 50/50 and NOT favoring the lead leg. The photo above shows this proper set-up. From that position you simply make a normal swing like any other shot out of the fairway and the loft and bounce on the club will do the work for you.

The next time you’re out on the course for a practice session or a round, watch out for these “anti-fundamentals.” Don’t be afraid to try something different or new with your short game and you might find you really like the results.

Brandon Stooksbury is PGA Director of Instruction at Idle Hour Club, Macon, Georgia and co-author of “The Wedge Book — An Owner’s Manual for Your Short Game.” Visit him at www.brandonstooksbury.com