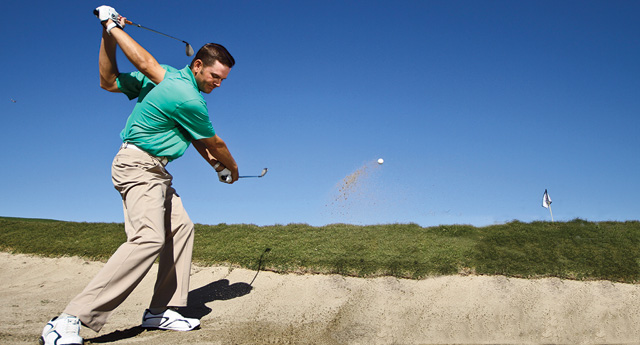 A bunker shot should be one of the easier shots you encounter on the golf course, theoretically. It’s one of the very few shots that doesn’t require solid contact–in fact, in most cases, it’s preferred that you purposely miss the ball and hit the sand first. The key, however, is knowing what type of sand you’re dealing with and knowing what small adjustments you need to make to produce good results. Let’s look at three key sand types–fluffy, normal and firm–and learn how to play successful bunker shots from all three types.

FIRM SAND
For all bunker shots, even from hard, compact sand, you want to try to hit approximately two inches behind the ball and create a divot that’s roughly 1.5 inches deep. Some have compared the divot size to a dollar bill.

For the setup, play the ball in the center of your stance with the hands forward. Keep your weight favoring your left side. And, unlike other bunker shots, you want to play shots from firm sand with a square or even slightly closed clubface. That’s because you want to reduce or eliminate the bounce of your wedge to ensure you get plenty of digging action. I tend to grip the club a little firmer, which helps prevent twisting through impact. By the way, make sure you have good footing in the sand. Just because it’s firm, it doesn’t mean you shouldn’t try to dig the feet in a little to prevent slipping.

SQUARE OR LOSE THE FACE
A square or even closed face at setup will lower the leading edge closer to the sand. A lower leading edge means the club will dig more, which is exactly what you need here.

You also want to create a more vertical swing plane, which more likely resembles a Ferris wheel than a merry-go-round. This vertical swing motion will also allow for more dig, which is necessary to create a big enough divot to propel the ball out of this situation. Notice in the upper right photo how vertical my clubshaft is. That’s what you want!

In addition, you want to feel the hands staying more ahead of the clubhead through impact. This, again, allows the leading edge to enter the sand first, creating a digging effect.

In the above sequence, you can see I made a very steep swing into the sand about two inches behind the ball. The wedge was able to dig in the firm sand thanks to a lowered leading edge, and as you can see, I continued to dig even after the ball was airborne. There wasn’t a big flip or release of the wrists. If anything, I wanted to keep the face square and dig for as long as possible, even if that meant finishing low and with no release of the hands post-impact.

Give this technique a try, and don’t be afraid to hit the sand with some extra oomph. Remember, the sand is firm, so it will really slow your swing down the more you dig. So be aggressive and hold that face square through the dig!

NORMAL SAND
To play successful shots from normal sand, set up with the clubface slightly open and the shaft neutral (up and down) to slightly back at address. This will allow for more use of the trailing edge or the bounce your sand wedge has built in. The trailing edge is what will help the club “bounce” out of the sand and prevent too much digging action.

If you use too much of the leading edge in this situation, the divot will be much deeper than our 1.5-inch goal. The result will be a ball that doesn’t come out with enough energy.

Finally, I like to keep my weight slightly favoring my forward side, with a neutral grip pressure. Unlike the firm sand shot, I want my hands to release.

SLIGHTLY OPEN THE FACE
The ideal plane for a bunker shot in normal sand is your natural one. Of the three, this shot is played most like a regular shot, only instead of hitting the ball first, you’re aiming at the sand an inch or so behind the golf ball.

Play this shot with the face slightly open. You want to add some loft and bounce, but not so much that the club bounces off the sand and doesn’t dig properly. How much should you open the face? That depends on your comfort level. Experiment with opening the face so you find just the right amount that works for you, only leave some room to open it even more (for fluffy lies).

Playing a bunker shot from normal sand should always be played aggressively. More often than not, I see my students get tentative and afraid of hitting the ball too far, or they hit too low in the sand. Both strategies lead to ugly results! Play your sand shots with some added vigor and don’t be afraid of hitting it long, and at the same time, don’t dig too much into the sand. Remember, 1.5 inches is plenty deep enough.

In the above photos, you can see I’ve made an aggressive strike and glided the club through the sand without slowing down. I’ve also released my wrists through the stroke since there’s no need to try to hold the face square or open. A good trick to speed up the hands is to remember to make contact with the sand using the trailing edge of your wedge. You’ll instinctively speed up the clubhead without excess digging.

FLUFFY SAND
Fluffy sand may appear easy to hit from, but don’t be fooled. Hitting successful shots requires more finesse here than hitting a shot from firm or normal sand.

However, the main objective in fluffy sand is simple: Don’t dig too much. To accomplish this goal, the face should be open, with the hands well behind the ball. The shaft will actually lean away from the target. I like to play the ball a little forward in my stance, with level shoulders. These setup factors will really help expose the trailing edge, allowing for more of a gliding (not digging!) scenario. My weight is centered, and like normal sand, my grip pressure is the same as it is for a regular golf shot.

OPEN UP THE FACE
Why open the face? You want as much bounce as you can get. Because the sand is soft and fluffy, it’s going to be very easy to dig and slide the club into the sand and underneath the ball. By opening the face, the added bounce will resist the tendency to dig, helping you hit less sand between the clubface and golf ball. Think glide and not dig!

The desired swing plane from fluffy sand is more rounded and flatter than both firm and normal bunker shots. Think of a merry-go-round, not a Ferris wheel. Again, you’re not going to have any trouble getting the club to dig and slide under the ball. A flatter swing plane will prevent you from, you guessed it, digging too much.

Hitting a shot with an open face at address doesn’t mean I have to hold the face wide open at impact. If anything, the goal is to release the clubhead as you normally would and allow the hands to cross over post-impact. If you try to hold the face open through the shot, guess what happens? You’ll most likely come up short of the flag.

It’s imperative to allow the clubhead to pass or swing beyond the handle through impact. This will feel similar to a scooping motion, allowing the wedge to glide through the sand without the clubhead slowing down. The result is a ball that’s propelled out and onto the green.

John Stahlschmidt, PGA, is a Top-25 Golf Instructor and is the Senior Head Instructor for the TOURAcademy TPC Scottsdale. To comment on this article, you can email John at johnst@touracademy.com.