Some Good Advice: Brick Your Chips
The most important thing you can do to improve your chipping game is to know your distances precisely. Here’s a drill that can help. Find an area where you can pace off 30, 60 and 90 yards. Then place a small builder’s brick at each distance. Hit pitch shots at the 30-yard brick until you land one on it. You’ll get a great thrill from seeing the ball bounce way up in the air, and you should start to develop confidence and an aggressive attitude when you begin to hit such a small target with regularity. After you hit the brick from 30 yards, go for 60 then 90 yards.

Editor’s Note: Since 1997, Golf Tips has featured one of the game’s great teaching personalities, Marshall Smith. The proud Oklahoman has made his instruction home on practice ranges from coast to coast and on every level of the pro circuits. Marshall’s newest book, A Lifetime of Lessons (Triumph Books), spills forth over 50 years of teaching expertise and his unique take on the way the game is meant to be played.

A good chip-shot player is usually a good lag putter as well. That’s because he or she understands how to use the speed, slope and grain of the green to his or her advantage. You should start any short-game practice by getting a feel for the greens you’ll be playing that day. Spend a few minutes on the putting green before you move over to the pitching and chipping area. The idea is to get a feel for how the ball will behave when it’s rolling on the ground. A small investment in learning the tendencies of the greens will pay off many times over.

Know the geography. Is there a geographical feature that affects the ball consistently? In the mountains, the ball will often tend to break away along a certain ridge. On seaside courses, it will move toward the ocean. My friends on the tour always make a mental note of how the land drains and use it to their advantage.

Know the grain of the green. This is particularly important on Bermuda grass, but it’s a factor on every course. Go to the center of the putting green and roll several balls toward the fringe in each direction. See how the different putts behave, and note the effect of the grain on each one. If you ever have the opportunity to watch a PGA Tour event practice round, you’ll see the players doing exactly that on each green.

Know your set makeup. As far as shot selection is concerned, the most important thing is not to get fancy. Don’t try a highlight-film flop shot when a nice little chip would do the job just as well. Use club selection to help with this. The basic idea is to use the chip technique for any shot. If you need to hit it higher, take a sand wedge or a lob wedge. You’ll naturally get more loft without having to make major adjustments to your stroke. For more roll, opt for a less-lofted iron. Sometimes it’s easier to roll a ball up onto the green than it is to fly it onto a ledge. Work backward from your target area, and go with the shot that makes the most sense.

My Chip Shot Technique
Of all the shots in golf, chip shots are my favorite. I’ve literally spent years of my life chipping—in the backyard, with my kids, against friends at the club in friendly competitions, and alone around the practice green with the setting sun as my only companion. Chips are funny—they’re not full swings, but they’re not putts, either. They’re kind of a blend and, therefore, require a special technique. Here’s what I focus on.

I try to settle into a relaxed address position, just slightly opening my stance by pulling back my left foot. I play the ball back with my hands forward-pressed. This assures that I make a nice “pop” on the ball. Scooping need not apply when it’s time to chip.

To take away the club, I use my hands and never—ever—move my hands above my knee. The clubhead should remain low to the ground until a slight—slight—hinge of the wrists brings the club up.

Before I change direction, I ease up on my hold of the club just a bit. The sensation I want to create is that my hands lead the club back to the ball, but they don’t dominate to the point where they overtake it. The last thing you want in a chip is for the hands to get “wristy” and sling the club into the back of the golf ball. Rather, the hands should lead the club into impact just as they do in a full swing, with the shaft and left forearm properly aligned at the point of contact. 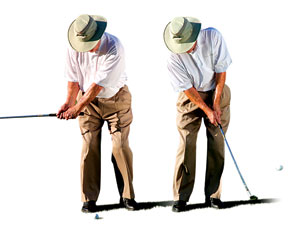 Although the hands control the chip motion, it’s imperative that you allow your body to rotate with the club as you hit through the ball (right). If you don’t open up to the target through impact, the club will come into the ball on an ascending path. Ouch. Even in a short swing such as this, your entire body must work in harmony.

Of course, you’ll need practice to judge just how long a stroke to make in order to chip the ball different distances.

2 Common Flaws
When chipping, avoid these two flaws and you’ll be well on your way to a great up-and-down. One: Restrict your backswing. The chip shot requires a short backstroke. When you get to the point where you must take your hands past your right knee, move to a less-lofted club and shorten the stroke. Two: Don’t ease into the ball. Although the swing is short, it’s still a swing and demands acceleration. If you stop at the ball, you’re likely to hit the ball fat or have the club race past your hands. Make a fairly long followthrough (at least longer than your backswing).

Walk It Off
You’d be surprised how many golfers—even tour players—can’t correctly judge shot lengths. Today’s golfers are very flagstick oriented, and they rely too much on GPS devices and whatnot to give them their distances. I played a lot of football in my day, so I know how far 20, 30 and 45 yards is. More important, I know what these distances look like. So should you; otherwise you’ll never become an expert at hitting to specific targets. Get in the practice of walking off all of your short-yardage attempts, even on the range. You’ll be surprised at how quickly your eyes will learn.

Hit Down And Through
In a regular full swing, the speed at which the club moves negates the danger of the club stopping or slowing when it hits the turf. During a chip, however, the club’s involvement with the ground must be considered because the club moves at such a slow rate or speed. Poor contact, especially when the club makes contact with the ground before it strikes the golf ball, can spell disaster.

The key is to hit down and through. You don’t need to take any sort of divot whatsoever with a chip, but it’s still very important that you strike the ball with a slightly descending blow. That’s where that audible click comes from. If you can never produce that click when chipping, you’re probably playing the ball too far forward. On all chips, position the ball so that it rests just before the bottom part of your stroke. You can find the bottom part of your stroke by simply brushing the grass. Assume your standard chipping setup and move the club back and forth in a continuous chipping motion. As you do this, check the ground and take note where the clubhead brushes against the turf in relation to your stance. This is where you need to position the ball to ensure clean contact.

50-Year Tip: Use The Ground
When you really get down to it, there are only three choices when it comes to getting the ball close to the hole from a short distance—a chip, a pitch or a lob. I advise my students, from bogey golfers to tour players, to keep the ball low to the ground whenever possible. The sooner you can get the ball rolling on the green, the sooner you’re on a predictable surface that will accommodate a less-than-perfect shot. Now, that’s keeping things simple and, in my opinion, is the key to a lifetime of consistent, great golf.

A Lifetime of Lessons (Triumph Books) is a 164-page manual to all that’s required to play the game of golf well. It contains over 50 years of lessons developed by one of the game’s great teachers, including the less-mechanical techniques to becoming a complete and courteous golfer.

Marshall Smith has taught the game of golf for over a half century. His former students include Chi Chi Rodriguez, Gary Player, Craig Stadler and current PGA Tour player Todd Fischer. Marshall teaches at Peoria Ridge GC in Miami, Okla.

3 thoughts on “A Lifetime Of Lessons: Lesson 2 Chip Shots”