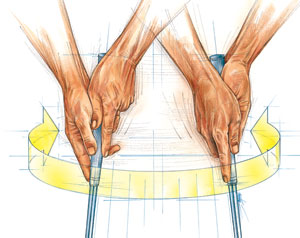 Though diagnosed a hundred different ways, the yips begin with loss of conscious, directional control of the ball off the putterface. Next comes the resultant loss of confidence. And suddenly, the possibility of actually hitting a controllable putt into the hole becomes nil. Yikes!

The primary cause of the yips is controlling your hands with your eyes. Your hands are two of the most intelligent appendages on your body. One of their greatest gifts is proprioception, the ability to sense where they are in space without your having to look at them. You don't have to monitor their work with your eyes.

Giving your hands the freedom to do their job independently, however, is only part of the yip cure. You must also understand what makes the ball go in the direction it does when you putt. Almost everyone I ask believes the stroke is responsible for the direction a ball takes during a putt. Actually, the face angle relative to the target is the deciding factor, not the path of the putter. The ball will always leave the putterface at 180 degrees from the part of the ball that made contact with the face (i.e., if you touch the ball at 3 o'clock, the ball will leave in the direction of 9 o'clock).

Since the relationship of the putterface to the ball is that of a straight line to a circle, the putterface can only touch the ball as a tangent, at one point at a time. To change the contact point, you must rotate the shaft either clockwise or counterclockwise during the stroke. If you don't rotate the shaft during the stroke, you can't change the contact point on the ball.

During the stroke, your hands can move the putter up and down (along the Y axis), to and from the target (along the X axis), and rotationally clockwise or counterclockwise (around the Z axis). The Z axis, which runs up the forearm from the wrist to the elbow, is the only one that influences puttershaft rotation and, therefore, the only one that influences direction. To cure the yips, a.k.a., the conscious loss of directional control, you must control the Z axis and the varying levels of forearm rotation.

A Drill That Works
Practice making a putting stroke by rotating the shaft clockwise on the backstroke and counterclockwise on the forwardstroke. Don't watch the putter! Continue this drill for 20 repetitions. Then, make the same stroke without rotating the shaft at all. You'll be able to feel the difference immediately. The contrast between rotation and non-rotation will help you anchor the proper non-rotational stroke.

Next, place a coin on the putting green five feet from the cup. Start with a straight putt. This coin marks the spot to putt from, like you would in a scramble tournament. Now, using five balls, hit all five balls from the same spot so they stop at the back of the cup using the non-rotational stroke. Repeat this drill 20 times. In my experience, it takes about 100 five-foot putts to ingrain this new non-rotational stroke. You'll be amazed at how consistently the ball rolls in the direction you intended. And, best of all, you'll rid your game of the yips for good.

A.J. Bonar is the Director of the A.J. Bonar Golf School, and the author of A.J. Reveals The Truth About Golf video series.