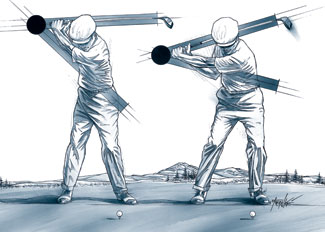 In instant prior to completing his backswing, Ben Hogan initiated his downswing with his body and arms, creating a lagging action or snap. This move resulted in a type of torque similar to that of casting a fishing pole.

The most significant result of this move was the creation of additional wrist hinging on the downswing, just as there’s additional bend in a fishing pole when you start the forward motion with your hands and wrists an instant before the top of the pole has completed its backward motion. When you compare the angle formed by Hogan’s left forearm and the shaft on his backswing to the same angle as he starts his downswing, it’s more acute (thus there’s more of a wrist hinge) on his downswing. A change of direction in this manner leads to additional power by combining the body drive with the wrist snap.

The major challenge in this type of swing, however, is timing the rotation of the clubface so that it’s square at impact. This perhaps explains the tremendous amount of time that Hogan practiced while perfecting his method.

To create snap in your swing, start your downswing with your body and arms an instant before your club reaches the top of your backswing. This, in turn, will increase your wrist hinge on your downswing and snap the clubhead powerfully into the golf ball.

Jay Golden is a member of the PGA of America’s teaching committee and a two-time quarterfinalist in the National Long Drive Championship.