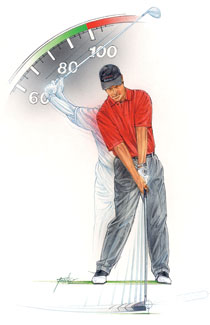 I’d like to let readers in on a little secret that professional long drivers share among themselves: Maximum distance results from somewhat less than maximum effort. Trust me, I’ve been competing in the long drive arena for 20 years, and during that time, I’ve watched competitive long drivers post their best distances when they throttle back from an all-out assault on the ball. So will you.

When Sean Fister won the 2002 RE/MAX World Long Drive Championship, his one goal was to keep his swing under control. He focused on swinging at 85 percent of his top-end speed. Faced with the pressure of trying to win a world championship, Fister used that formula to unleash a sensational winning shot of more than 375 yards on the final ball of the event.

Driving with 85-percent effort, not your all-out max, promotes several positive things during your swing, one of which is maintaining balance. Golfers who immediately get out of balance by overswinging have to make compensations to correct the situation. Another benefit is solid contact. Golfers who swing at 85 percent have the best chance of catching the ball flush on the sweet spot of the driver. Also, swinging at 85 percent reduces tension in the body and allows fast-twitch muscles in the hands and arms to work.

Finally, your equipment actually works better when you swing at 85 percent. The properties of torque and flex built into the shafts of today’s drivers perform best when the club isn’t being swung as hard, or as violently, as possible.

Art Sellinger is a two-time National Long Drive champion and a member of the Pinnacle Distance Team. Art’s Power Guarantee training system is available by calling (817) 329-8262 or visiting www.artoflongdriving.com.