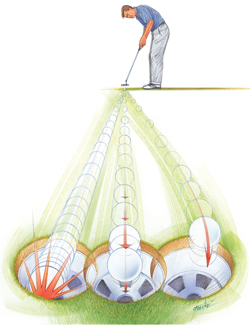 Most recreational golfers don’t spend as much time on the practice putting green as they should, and when they do make the effort to roll a few balls for improvement’s sake, it’s usually done without purpose. Practice is most effective when you have a specific focus or goal and it’s the only method to truly improve your putting technique–and to easily drop a few strokes per round. The following Three-Speed Drill is a purposeful method for doing just that by involving four key areas of successful putting: green reading, concentration, speed control and accuracy.

Place three golf balls four feet from a hole on a practice green (four feet is roughly one foot longer than your putter). Your goal is to make each putt, but each with a different speed. The three speeds should roll the golf ball so that it:

_Ê Drops in the front edge on its last roll (slow speed)
_Ê Pours into the middle of the cup (medium speed)
_Ê Hits the back edge of the cup, pops up and falls into the hole (firm speed)

In order to vary your speed and still make these putts, you’ll need to use your green-reading skills to play more or less break. You also must maintain focused concentration, as simply making each putt isn’t enough.

Repeat this procedure until you’ve hit nine putts from one spot or have made three in a row, each at a different speed. Do this from eight, 12 and 15 feet and then repeat from the opposite side of the hole, creating a different break for the putt. For this drill, you’ll stroke a maximum of 72 putts. For best results, vary the speed order of your putts (medium, slow, fast, or fast, slow, medium, for example).

This Three-Speed Drill should take no more than 25 minutes to complete and will improve your touch and visualization, allowing you to make more short- and medium-length putts.

If you have trouble with a specific type of putt on a consistent basis, be sure to make note of it and allot some extra repetitions for that type of putt. Also, don’t continue to repeat the same putts from the same spot time after time. If you feel the putts are dropping automatically, particularly on the slower, breaking putts, then find a different spot on the green and start your routine from the beggining, without any practice balls._Ê

The goal of any putting drill is to simulate the conditions you’ll find on the golf course. With that in mind, if you’re going to spend a significant amount of time working on your putting, make an effort to find at least two different practice facilities with decent-quality greens. Anyone who’s played a reasonable amount of golf in his or her lifetime knows that every golf course presents its own challenges, not the least of which is unique green conditions with varying speeds and undulations.

Rob Stock is an assistant golf professional at Farmington Country Club in Charlottesville, Va., and is a former Dave Pelz Short Game instructor.