After watching thousands of swings over the past 30 years, I’ve pinpointed three mistakes that the majority of amateurs commit, each of which can diminish power and accuracy.

The first is overswinging. Most amateurs overswing because they have a poor understanding of how power is created. More than 70 percent of your power comes from the ability to maintain the fully loaded wrist set established at the top deep into the downswing. Maintaining this position as long as you can then releasing the clubhead through impact accelerates the speed at which your clubhead moves through the hitting zone to four times faster than the speed of your hands. 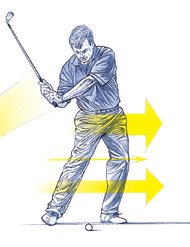 The second mistake I see the majority of amateurs make is overusing the legs. While it’s certainly advantageous to use your legs, wildly moving them through the ball will actually slow your clubhead speed and force you to make power-robbing compensations. Remember, the legs serve to support the swing and, as a result, instinctively control the clubface. 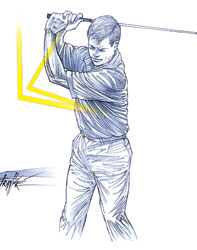 The third amateur mistake is losing their leveraged triangle at the top. Many players allow their arms to get behind them at the top of the backswing or allow their right arm to fold or collapse. When you fold your right elbow excessively (greater than 90 degrees), you’ll force your arms behind your back. And once they’re behind your back, it’s nearly impossible to return them to a strong position at impact. You’ll not only lose distance, but also accuracy.