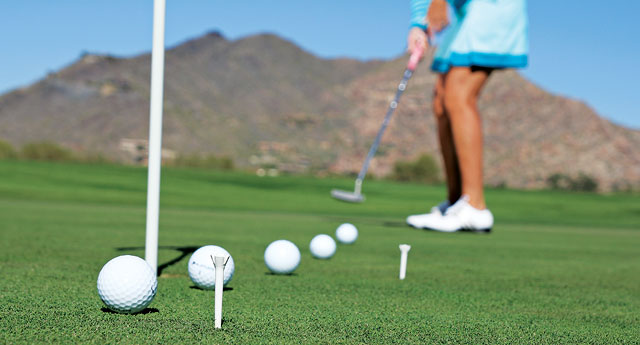 If you're struggling with your distance control and three-putting, sometimes the best practice is to rehearse a simple drill that takes the focus off the hole and onto a different end goal. When we try to get specific with our targets, sometimes this makes matters more difficult. This is especially true when it comes to lengthy putts. Seems the more we try to pinpoint our long putts, the worse we sometimes get. It's the curse that comes with trying too hard.

As I mentioned, the goal isn't necessarily to make every putt (although it doesn't hurt if you do). Instead, what you should do is train your eyes and your mind to see a bigger target when you putt from 20, 30, 40 feet and beyond. These are the distances you're more likely to two-putt from anyway, so let's make sure you do and avoid the dreaded three-putt at all costs.

The drill is to take about 5-10 golf balls, and practice rolling your putts from 20 feet, 30 feet and 40 feet. Keep putting until the majority of your putts end in the triangle from each of those distances.

As you practice getting your golf balls to end up in the triangle (or better, in the hole!), you'll find that the bigger target is easier to find, you're more likely to make a confident stroke, and most importantly, you'll find yourself three-putting a lot less often on the golf course. And speaking of that, try visualizing this drill the next time you have a lengthy putt on the course. It just might help calm your nerves and make a smoother, more controlled putting stroke. After all, a bigger target is a much easier one to find than a 4.25-inch cup!

Susie Corona, LPGA, is the Director of Golf at Terravita Country Club in Scottsdale, Ariz. Visit terravita.com for more information.

One thought on “Tee Party”