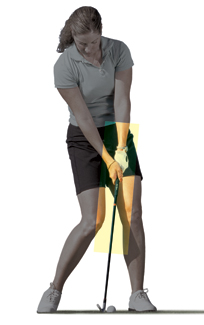 All good players have one position in the golf swing that’s similar despite their very different-looking swings. This position is impact. Good players retain their wrist-cock through the hitting area so that their left wrist is bowed and the right wrist is flexed (for right-handed golfers), and both hands are slightly in front of the golf ball at the strike. This is often called a late hit or clubhead lag, and good players use both to create a tremendous amount of clubhead speed and power in their swings.

High-handicappers tend to do the opposite at impact. Instead of a late hit, they actually execute what’s called an early release. They scoop the ball at impact because they lose the lag too early in the downswing. Instead of having a bowed left wrist and their hands ahead of the ball at impact, they have a collapsed left wrist and their hands are behind the ball. As such, they suffer a tremendous loss of power and direction and end up with a very weak hit. Golfers with this problem tend to hit the ball better with their woods than their irons because the ball is teed up and they can get away with scooping or hitting up on the ball. In order to hit solid irons shots and better drives more consistently, however, it’s necessary to hit down with a flat left wrist that’s ahead of the ball at impact.

To create a late hit, you must sequence the swing so that your hands, wrists and clubhead arrive at impact in the correct order. This is called sequencing.

Sequencing
First, check your left-hand grip (your right if you’re left-handed) to make sure that the club handle is held primarily in the fingers as opposed to the palm. When you look down at your grip, you should see at least two knuckles on your left_Ê hand at address. The V formed by the thumbs and forefingers on both hands should point to the right side of your face.

If you can’t see at least two knuckles, your grip is primarily in the palm, and this will make it difficult for you to create the necessary wrist hinge for a late hit at impact.

Second, as you swing back, allow your wrists to hinge naturally. To help create wrist hinge, imagine that there’s a hole in the butt end of the club and the shaft is full of water. As you swing back, pour the water out of the shaft onto your right leg. The wrists should be fully hinged by the time the left arm becomes parallel to the ground. This backswing wrist hinge must be duplicated in the downswing.

To ingrain the feel of this position, practice putting yourself in the correct impact arrangement. Start at your address position, with your weight evenly distributed. Your arms and club should form an uppercase Y. Now, shift your lower body weight and hands toward your target. Your hips should be slightly open, your left wrist should be flat and there should be some angle in the back of your right wrist. The capital Y formed by your arms and club at address should now resemble a lowercase y. Hold this position for a few seconds and repeat. Next, make a full swing, focusing on creating the lowercase y at contact. With a little practice, your shots will become straighter and more powerful.