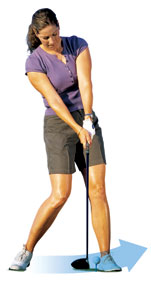 Throughout my 15 years of teaching, I've learned no two swings are alike. I've also learned that, despite the individual thumbprint every player puts on his or her swing, good swings share several common traits at key points. Unfortunately, these traits differ from the commonalities found in the swings of lesser-skilled golfers. In fact, high-handicapped golfers tend to do the exact opposite of what a fundamentally solid swing requires. Of course, you don't need to swing exactly like a Tour player to improve your ballstriking. However, building a few of the common traits found in higher-level swings into your own will pay huge dividends.

Over the next several issues of Golf Tips_¨, I'll demonstrate the differences between Tour swings and amateur swings at address (with the driver and with shorter clubs); during the backswing, as they relate to swing plane and footwork; at the impact position (focusing on wrist position, shoulder position and head movement); and finally, the release. In this issue, I'll explain the differences between good players and high-handicappers in the address position with the driver and provide a few easy drills to get you to do the opposite of what you're likely doing and add a touch of the Tour to your long game.

Driver Setup
When a good player sets up to hit the driver, he or she invariably does so with a nice, wide stance and with the ball positioned opposite the left heel. The wider stance helps position the head behind the ball–exactly where it should be. The hands are neither forward-pressed nor angled behind the clubhead. Rather, they lie directly above the crown of the driver. Weight distribution favors the back leg (approximately 60%), and the spine is tilted so that the right shoulder sits lower than the left, about the same distance as the right hand rests below the left on the grip.

All of these setup elements promote the desired sweeping motion (unlike your irons, which demand more of a downward strike on the golf ball). Remember, the ball is teed, so the angle of approach should be shallow or ascending in order to direct an appropriate strike and launch the ball high. You'll notice that relatively few pros ground the driver at address; most hover the clubhead above the ground to relieve tension and promote a wide takeaway, both of which facilitate a sweeping or ascending path through impact.

High-handicappers, however, tend to do the exact opposite when addressing a golf ball with the driver. High-handicapped golfers adopt an address position we teachers call on top of the ball. Here are the cold, hard facts:

_Ê The head is in front of the ball

_Ê The majority of weight is positioned over the front leg

_Ê The shoulders are level

Addressing the ball in this manner promotes two things, and both of them are bad. A forward weight displacement and hands ahead of the golf ball invariably force the shoulders to open relative to the target line, setting in motion an out-to-in swing path and the probability of a slice. Level shoulders, rather than the right sitting below the left, make it extremely difficult to approach the ball on an upward arc. In fact, from this position, you're likely to approach the ball on a downward angle (if you suffer from pop-ups, here's your culprit).

How can it be that, in most cases, recreational players do the exact opposite of the pros in so many facets of the address position? The reason: poor alignment. Most high-handicappers tend to aim their bodies directly at the target instead of the correct way, which is parallel to, but left of, the target line. In essence, when you align your body to the target, you're aiming too far to the right, which you'll eventually sense as you settle into address, and correct by twisting your shoulders back to the left, or open. Open shoulders dictate a slice. A by-product of this compensation is a leveling of the shoulders and a shifting of weight to the forward leg. This places you on top of the ball instead of behind the ball.

Correction
Remember, you want to promote a sweeping motion with the driver, so you must set up behind the ball at address, not on top of the ball. The next time you spend time practicing your driver swing, work on achieving the key elements of a Tour-level setup position:

_Ê The ball is positioned opposite the left heel

_Ê The left shoulder is higher than your right

_Ê Sixty percent of your weight over your back leg.

In addition, try the following drill, which is an easy way to help you set up behind the ball at address with the driver, rather than on top.

Assume your normal setup, then remove your right hand from the club and place it behind your right knee. Notice how doing this automatically lowers your right shoulder, pulls your head behind the ball and forces more of your weight to position itself over your rear leg. Keep your shoulders and body in the same position and replace your hand back on the grip. You're now properly set up behind the ball and ready for drastically improved driving.