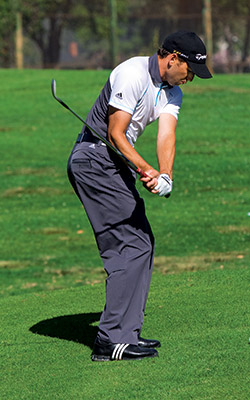 SWING LOW, LEFT SHOULDER Sergio's left shoulder points down toward the ground and behind the ball late into the downswing. This serves two purposes: First, the steeper shoulder angle keeps the left arm close to the body and enables him to create his famous lag. Second, the closed position of the shoulders prevents the club from coming over the top.

WEIGHT ON THE MOVE
While the arms and club are held back by the upper body, Sergio shifts his weight toward the target with his lower body. His knees remain flexed as the majority of his weight moves onto his left side. This is critical for solid iron shots as it facilitates a downward path into the ball.

ABS APLENTY
Sergio's tremendous fitness has numerous benefits including increased power and longer practice sessions. Technically, his core strength enables him to maintain his spine angle under the tremendous torque created between his upper and lower body during the swing.

THE LINES HAVE IT
Note how the leading edge of the clubface is perfectly square, and is lined up perpendicular to the ground halfway down. It's also parallel to the outside of the left arm. Also, the clubshaft is running through the right forearm, putting it on plane as it approaches impact.

This year's Players champion is known for many things, including his flair for dramatics on the course and his unique fashion sense. But more than anything, Sergio is known for having the most Hogan-esque swing on Tour. Take note of the incredible amount of lag he creates in the transition—his hands are extremely deep while the clubhead is still well behind his body. This is Sergio's key for amazing ballstriking, and like Hogan, it allows him to produce a ton of power with outstanding accuracy. If you have good flexibility, developing lag in your swing is something worth working on._Ê