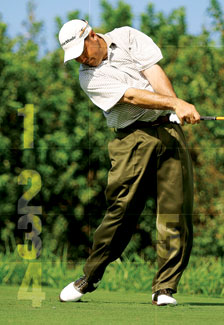 Reigning PGA champ Rich Beem is a long-hitting, aggressive player with a swing more reminiscent of the players of the ’70s and ’80s, than the current, video-taught golfers of the modern era. The first thing you’ll notice about Beem is his extremely long, upright backswing, which is a bit like Tom Watson’s in his heyday. You’ll also notice that he drives his legs excessively toward the target like Jack Nicklaus. While the overall look of the swing is powerful yet a bit sloppy, Beem knows how to make it work. And his go-for-broke style not only makes him tough to beat when he’s playing well, but also makes him a lot of fun to watch.

1 Body Tilt
Beem’s wide stance and lateral slide of the lower body pins his head down well behind the ball. In fact, his head actually moves away from the target through impact as his legs move toward the target. This tilts his body excessively to his right, exaggerating the inside swing path and the fast rotation of his forearms after impact.

2 Lateral Slide
Beem has a significant amount of lateral slide in his lower body during the downswing portion of his motion. This gives the club time to attack the ball from the inside, which is somewhat difficult to achieve with his long, upright backswing.

3 Anti-Hook
Beem’s left-hand grip is quite strong, creating two potential problems. First, the clubface must be prevented from closing through impact to reduce the possibility of a hook. Second, the club must come from the inside in order to counteract any closing of the clubface. The inside path problem is handled by his lateral slide and excessive body tilt, while he holds off the rotation of the clubface by keeping his hands well in front of the clubhead at impact. This turns a potential hook into a playable draw.

4 Wide Stance
Like most golfers who generate tremendous power, Beem’s stance is very wide. This supports his big, long backswing and helps create more tilt in his upper body through impact. Without the wide stance, Beem would be unable to stay behind the ball as long as he does. Although this may be a key for him now, it will be hard on his lower back in the future.

5 Left Foot Flare
The position of the left foot is a key to Beem’s swing. The foot is rotated at least 45 degrees open at address and moves even more open at impact. This shift occurs because his left heel comes off the ground during the backswing and replants to start the downswing. Flaring out the foot enables the left knee to slide more easily toward the target, helping create an inside attack.