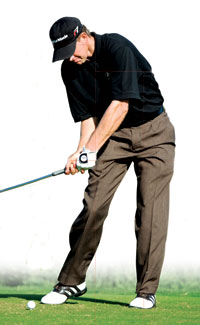 Currently ranked fifth in the world, Retief Goosen is an elite-level player who has two U.S. Open titles on his resume and the potential to win several more. Known for long, accurate driving and clutch putting, Goosen’s swing is somewhat idiosyncratic, filled with compensating moves that make it less than ideal by modern standards. Many of his compensations occur because his head moves significantly from address to impact, but not in a rotational way like Annika Sorenstam’s or David Duval’s. Goosen also bends his left arm through impact, a characteristic most commonly associated with recreational players who tend to slice. Regardless, Goosen currently boasts 25 worldwide victories and close to $20 million in career earnings, proving that talent is truly king.

1. Back Track
Goosen’s head moves down and back during the downswing. This tends to be problematic for most players because it creates excessive hand action through impact and forces the body to stall out or hang back as it moves toward the finish. Like most Tour players, particularly those of the past, Goosen usually avoids the problems normally associated with this type of head motion by hitting thousands of golf balls and mastering his compensations.

2. Dominant Eye
Goosen shares the title of U.S. Open champion with the likes of Tiger Woods, Ben Hogan and Jack Nicklaus, but he doesn’t share their dominant eye. While those great champions are left-eye dominant, Goosen’s right-eye dominance is obvious as his right eye moves under his left approaching impact. There’s little doubt this fact largely contributed to the development of his lower-body slide move._Ê

3. Champion’s Hands
While Goosen’s swing contains numerous compensations that would spell disaster for most players, there’s no denying the classic alignment of his hands approaching impact. Notice how his left wrist is flat and his right wrist is bent—this is the reason he hits the ball so well and why Goosen is able to win championships despite the flaws in his swing. The lesson Goosen teaches us is that it’s most important to know our own mechanics.

4. Stepping Up
Most good players allow their right heel to be pulled off the ground by the pivot of their body as they rotate through impact. This happens because, when a player’s pivot is working correctly, their hips rotate and move the majority of their body weight into the left heel. In contrast, Goosen’s lower body slides toward the target instead of rotating, which causes his foot to be pulled up prematurely.

5. Chicken Wing
Notice how Goosen’s left arm is bent through impact. This normally undesirable chicken wing position is his way of compensating for his falling head during the downswing. Bending the arm effectively shortens the distance from his left shoulder to the clubhead, which is a must for Goosen because of his faulty head position that holds his body back through impact. If he didn’t make this chicken wing move, he’d consistently make contact with the ground before the ball.

Although Goosen’s elbow is bent before and at impact, he lets it extend fully just after contact, minimizing the negative effect on distance. For the average recreational player, this type of move definitely isn’t recommended.

The r7 425 TP from TaylorMade is Goosen’s driver of choice, but it might be a bit too much for some of you. If so, consider giving the r7 460 a try. For more info visit: taylormadegolf.com.