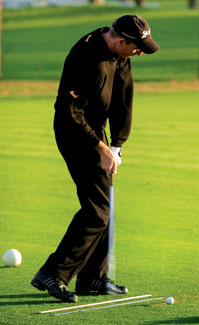 Considering the fact that Jim Furyk is the second best-ranked player in the world and he’s in the top five on the PGA Tour in both driving accuracy and greens in regulation, there’s really no need to take apart and analyze the unorthodox movements in Furyk’s unique but effective golf swing. Instead, let’s look at the good stuff we all can learn from perhaps the most underrated major championship and 12-time winner on the PGA Tour. (By the way, he’s definitely going to win a lot more.) Here you’ll see Furyk near impact as he warms up during a crisp Los Angeles morning at the Nissan Open._Ê

1. Trapped Right Elbow
Furyk’s right elbow is stuck behind his right hip approaching impact, a direct result of the close proximity of his hands to his body in the address position. While this isn’t a powerful position, it can produce very accurate shots.

2. Face The Target, Not The Ball
Furyk demonstrates a fundamental difference between Tour players and most amateurs: His entire body (hips and shoulders) is facing the target and not the ball at impact. This enables him to maintain speed through the impact zone and prevents hitting at the ball with the hands.

3. Toe In, Heel Out
The inside toe of Furyk’s right shoe is still on the grass while the outside of the shoe is raised up. This helps the right knee and hip rotate toward the left heel, making it much easier to clear the lower body out of the way at impact. If the inside of the shoe rolls during impact, it’s a clear indication that the lower body is sliding instead of rotating.

4. Lead With The Head
Furyk’s head and eyes are rotating past the ball before he reaches impact. While this may seem unusual, it’s a move he shares with many Tour players, including Annika Sorenstam, David Duval and Joe Durant. The benefit of this technique is that it keeps the body moving ahead of the club, promoting more passive hands and arms at impact and throughout the swing.

5. Unique Swing, Flat Wrist
While Furyk possesses what many consider to be the most unusual swing in professional golf, there’s nothing unusual about his left wrist approaching impact. For good ballstriking, it’s critical that he maintains a flat left wrist at impact. He’s in a perfect position here.

6. Back To Basics
Proper alignment is a fundamental that’s often overlooked, particularly by amateur players. Furyk demonstrates that even a U.S. Open champion needs

to focus on the basics. Placing a straight shaft or other alignment aid on the ground parallel to both the target line and the feet is an excellent way to practice proper aim.

You may not hit as many greens as Jim Furyk, but at least you can use the same irons he uses. Check out Srixon’s I-506 irons online at www.srixon.com.