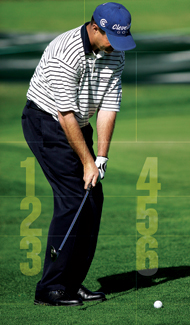 Solid short-game performance is key for any competitive golfer, and an absolute must for those fortunate enough to play on the PGA Tour. Jerry Kelly, who ranked 16th in scoring average with nearly $1.5 million in earnings after 15 events (as of mid-July) knows this fact well, as illustrated by his proficiency at saving par after missing a green in regulation (he currently is second on Tour in scrambling). The basis of Kelly’s success is solid fundamentals, which include a forward-leaning shaft resulting from his hands leading the clubhead through impact, a slightly open stance that allows his arms to extend through impact without any breakdown of the left wrist, and a stance that places the majority of his weight on his left side. These three factors combine to create a descending blow and rock-solid contact time after time, the key to predictable distance control and successful chipping. Check out Kelly’s technique and try to emulate it–you’ll leave yourself shorter-par putts and shoot significantly lower scores.

1. Shaft Bend
The left wrist is flat and the right wrist is bent back. This alignment was created at address with the hands slightly forward of the clubhead and preset in the impact position. They will maintain this position during the entire stroke, fulfilling the most important chipping fundamental–a forward-leaning shaft at impact.

2. Knee Keys
The knees are slightly flexed and pointing in the same direction as the feet. They will remain flexed throughout the stroke, which will keep the club traveling in a steady and repeatable arc. The swinging of the arms may move the knees, but the knees will not move independently.

3. Weight Matters
Kelly’s feet are close together, his toes are pointing in front of the ball, and the majority of his weight rests on his left foot. Starting with his feet in this manner helps to quiet the lower body and fulfills one of the fundamentals of good chipping: forward weight placement. This will create a slightly descending blow, eliminating the tendency to scoop.

4. Soft Shoulders
Kelly’s shoulders are down and very relaxed. Tension is a killer of good chips and must be alleviated to ensure success. This softness in Kelly’s shoulders trickles down to his arms and hands and allows him to relax through impact and concentrate on his target while controlling the distance of the shot._Ê

5. Open Hips
Like his feet, Kelly’s hips are slightly open to the target at address. Choking down on the handle allows him to bend over more comfortably, enabling his arms to hang down freely from his shoulders. The open position of the hips allows the arms to remain extended past impact and helps prevent any breakdown in the wrists.

6. Face Control
The clubface is directly in line with a flat left wrist. Notice how both the wrist and clubface have rotated away

from the ball. They’re both staying on plane and will rotate back to impact and through to the finish just as a door would when swinging open and closed.

Jerry Kelly plays the new Cleveland CG10 wedges. For information on the CG10 lineup as well as Cleveland’s other Tour-quality wedges, visit www.clevelandgolf.com.